A quick glance at my calendar showed me that there was not going to be very much time to rest during the first couple months of the new season. Fortunately, all the conducting was going to be done with institutions I know well, so at least a degree of familiarity lent some cohesion to the whirlwind of rehearsals and concerts. My schedule would include the three orchestras where my career had developed over the past 50 years.

First up was St. Louis. It is hard to believe that it was 49 years ago that a young man first stood on that podium at Powell Symphony Hall. There will be celebrations to come next season, but this year it was a return to one of the pieces that helped put the orchestra on the map. I did not count how many times we performed Rachmaninov’s Second Symphony, but it was probably the work we played the most often.

There are only two orchestra members left who were in the ensemble on my first outing in 1968. There are probably around 15 or so who joined the orchestra before I departed as music director 27 years later. Still, by the time we got to the performances, much of the old sound had returned. The musicians who performed this work with me in the past were able to convey some of the experiences we all had over the years. There are also only a couple of staff members who were around while I was at the helm, and they will be leaving at the end of this season. Throughout the week, I could not help but think about what we had all accomplished together, and I was filled with pride over both the past and the present.

Amazingly, the soloist, Garrick Ohlsson, had never played with me during my tenure. Although we have been working together since the early Seventies, somehow his St. Louis dates never coincided with my schedule. We made up for this by performing the piece we first did together in Aspen as students, Chopin’s First Piano Concerto. As usual, we did not meet before the first rehearsal but rather just let the music flow, the two of us on the same page at every turn. Usually one just follows the lead of the soloist in this piece, but we managed to make it a collaborative work, with lots of rubato. I took my lead from him when needed, and Garrick would do the same from me.

To open the concert, I brought back a piece that the orchestra and I had premiered in 1986. Chris Rouse’s Bump is the final movement of a trilogy that included his initial success, The Infernal Machine. During the eight minutes the orchestra gets to show off pretty much everything, from delicate pianissimos to outrageous fortissimos. All of it is done with gusto and a fantastic sense of humor. It always brings a smile to my face when I open a score and am reminded that I have either premiered or recorded the piece, and Bump provoked a similar response.

On the day of the last concert, I rehearsed with the St. Louis Symphony Youth Orchestra, an organization I founded two years after I began my association with the big guys. It gives me great pleasure to see how they have grown, now one of the most respected young ensembles in the country. Under the associate conductor of the SLO, Gemma New, they are doing very well indeed. So another celebration will be looked forward to on a future trip to Archway City.

Now it was time to open the season in Detroit. This is my final season as music director, concluding what has been a most successful tenure. Even though we hit a very large bump in the road seven years ago, it is amazing how far we have come, bringing the city along with us. During this season, I am performing many works that are close to my heart, but we are also initiating what I believe is a very interesting project.

Some people thought that I might commission works from the usual suspects, those composers with whom I have worked throughout my career. John Corigliano, Cindy, the above-mentioned Chris and others seemed like logical candidates. Instead, I asked each of them to suggest either a current or past student to create a work that would start off each concert. For the opener, we had a piece called How to Relax with Origami, composed by a student of Joan Tower. Conor Brown produced a series of eight miniatures, totaling twelve minutes. They were little gems of color, rhythm and cohesion.

Many years ago, I asked pianist Olga Kern to learn the Barber Concerto. We were supposed to have performed this work together in St. Louis, but she became ill and had to cancel. This time, in perfect health, we had the opportunity to play this piece. I have a long history with the concerto, having done it often with John Browning and a few times with other pianists. Now it was time to share what I learned. By the time we completed the series of three concerts, it was clear that Olga would become one of the work’s great champions. And it is gratifying to know that many pianists have taken up this piece, as it certainly ranks with the best in the form.

In my new book, Leading Tones, I have a chapter devoted to the ten pieces that give me the most satisfaction as a conductor. These are not necessarily my ten favorite works, as that is simply not possible to even consider. Right at the top of the list is the “Eroica.” With the DSO sounding in mid-season form, my opinion has not changed one bit. There are a few things that I now do differently, especially in the first movement, but most of those reconsiderations have to do with form and architecture. The orchestra played magnificently, and we got the season off to a great start.

The following week saw the second of the commissioned works, this time from Loren Loiacono. She had been a student of Steven Stucky, who passed away a little over a year and a half ago. Loren only found out about the commission after he died. Smothered by Sky is a seven-minute journey of colorful sounds with a voice that is clearly emerging as that of a gifted composer. I suspect we will hear a lot from Loren in the future.

There were two soloists during this program, both members of the DSO. Wei Yu, our principal cellist, performed a stunning rendition of the Elgar Concerto. His sound was always integrated into the rich orchestral fabric, yet able to be heard at all times. He brought a true depth of feeling to this highly expressive work. As with Garrick the previous week, there was a great deal of flexibility, and the performances were each quite different. I am very proud to have appointed this outstanding musician to the ranks of our ever-evolving orchestra.

Violist Eric Nowlin, now in his second season with us, was the stalwart hero in Berlioz’s Harold in Italy. This piece has always had a special place in my heart, maybe because I used to attempt to play the instrument, very poorly I might add. Although it has a soloist, the work is really a symphony that features the viola. The second movement is one of the marvels of the repertoire, and the whole thing is great fun to conduct. Eric was terrific, yet another in the long list of great hires we have made.

Concluding the month was the first of two visits I will make this season to the Manhattan School of Music. Having been on the Board of Trustees for almost eight years, I started doing some work there on a more regular basis last season. This fall’s visit included me working with two young conductors whom I mentored and taught. I also worked with the orchestra. We had five days of rehearsals and one concert.

My two charges were Malcolm Merriweather and Timothy Cho. The first led Wagner’s Tannhauser Overture and the other conducted Barber’s Second Essay. Both are works I have done often, and I had the chance to offer some insights and technical information to everyone. In many ways, I don’t believe that the keys to conducting well can actually be taught. Yes, how to beat time, read a score and develop independence of the hands are qualities that can be learned, but the crucial area, communication, is still undefined. It probably comes down to raw talent.

Both conductors improved tremendously over the week and delivered fine accounts of their respective pieces. My contribution to the concert was Elgar’s Enigma Variations. This is a great piece for young musicians, showing off solo and ensemble skills as well as imparting character to each of the portraits. The performance was in Riverside Church, as the school’s Neidorff-Karpati Hall is undergoing renovation. The space proved to be surprisingly good for such a resonant acoustic. My next visit, in April, has us doing the Jeff Beal score to Buster Keaton’s masterpiece, The General. 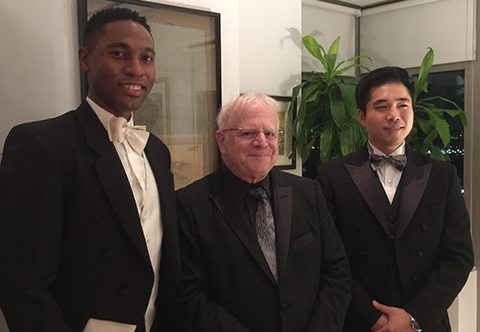 with Malcolm Merriweather and Timothy Cho

In the middle of all that, Cindy and I had the pleasure of going to hear the NY Phil with Alan Gilbert and Josh Bell. This program was the start of a three-week-long celebration of Leonard Bernstein. The Serenade and First Symphony were on the program, and even though I have long loved these scores, there are still many who do not know them. If anything, the almost two-year retrospective of the man will highlight Bernstein the composer, the part of his life that he most wished to be remembered for. It was also wonderful to see his three children at this concert.

Soon it will be time for me to lead the NY Phil. This month I lead works by Bernstein with my other old orchestra, the National Symphony, and then I head back to New York for two weeks with the Phil. This will include a trip to Ann Arbor. It seems a bit strange to realize I will conduct the NY Philharmonic and then drive 45 minutes to get home.