What a month! November may be the time to give thanks but, at least this year, it was also the time to visit some old friends.

It all started in Washington with the NSO. I had not been back to my old orchestra for several years. There are many fresh faces but still a majority of musicians whom I hired over my twelve-year tenure. Most everyone seems to be doing very well, and I actually remembered most of their names. A few members have passed away, and some others have retired, but by the time the first rehearsal ended, we all seemed to be comfortable with each other.

The program began a two-year survey of the life and times of Leonard Bernstein. He would have been 100 years old this coming August, and the world is celebrating. The nation’s capital was involved in an important part of the Bernstein legacy, including his conducting at the inauguration of President Kennedy. My parents were invited to participate at the invitation of one of the performers, Frank Sinatra. In my work space at home, I have photos of my folks with the Maestro taken during the festivities.

This Leonard wrote three pieces that were premiered by the National Symphony. We played two of them, omitting the Three Meditations from MASS. To celebrate the first concert given by Music Director Mstislav Rostropovich, Bernstein created a fun, five-minute overture called Slava! It incorporates almost circus-like music as well as a quote from Boris Godunov. The piece has the orchestra shouting out the titular musical giant’s nickname, and I found Bernstein’s tribute much more interesting than when I first heard it many years ago.

The other NSO commission was Songfest, a work for six singers and quite large orchestra. There are twelve songs with texts by thirteen authors. Some of the songs are solos; others are for different vocal ensembles. I performed and recorded the work in 1992 with the St. Louis Symphony. In 1990, I led the piece with the NY Philharmonic. Just before the first performance, the phone in the guest conductor’s dressing room rang. Bernstein called to say how sorry he was not to be able to attend the performance, and he wished me all the best. A couple months later, he passed away.

Perhaps the most important thing about this piece, at least to me, is the text that Bernstein chose to set. In many ways, the words are reflective of the composer’s life. Championing women’s rights, social activism, and diversity, the work is almost autobiographical. It also presents the texts in varying musical styles. We had the good fortune to share the stage with six singers from the Domingo-Cafritz Young Artist Program from the Washington National Opera. They were absolutely terrific, and I am certain that I will see many of them in the future.

After intermission, I decided to present Le sacre du printemps. One of the first recordings I cherished was the old Colombia LP with Bernstein conducting. It was also the piece he was leading in Tanglewood when we finally met. The NSO played brilliantly for all the performances, including a special concert that was part of their “Declassified” series. My son, Daniel, and his fiancée, Bridget, came out for the week, and we connected with dear friends almost every day. All in all, a very nice return, even with chaos going on constantly in the Congress and White House. 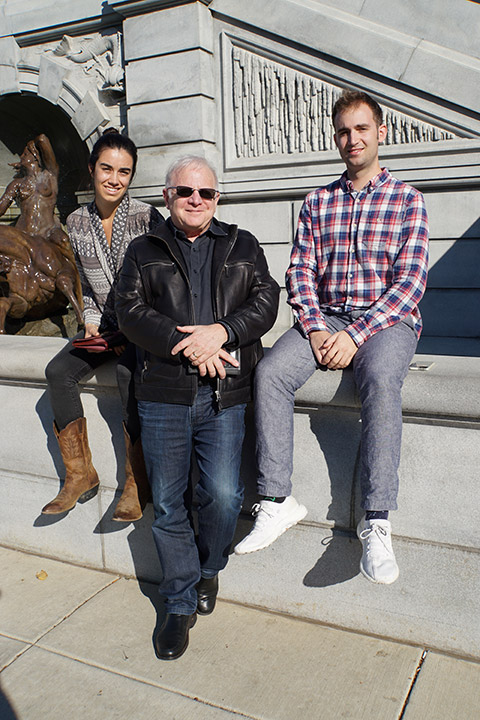 With Bridget and Daniel

There was a lot more Bernstein to come. During the next two weeks, I led the NY Phil in the final performances of the centennial festival celebrating their beloved former music director. As with Washington, the piece chosen was one that has not had too many performances. “Kaddish” was the last symphony written by the composer, and as with his first two, this one also falls outside the traditions of the form. Utilizing a very large orchestra, adult and children’s choruses, soprano soloist, and a narrator, this piece has always been surrounded with controversy.

For the most part, Bernstein is trying to make some kind of peace with God. Once again, the composer is putting his lifetime struggle out there for all to see. For many, this was the most problematic part of the symphony, but there had been questions as to Bernstein’s use of twelve-tone techniques. At the time of the first performance, I also was not certain that this musical language worked, but after more than fifty years, it is now clear to me that it is a fine achievement.

We were very fortunate to have the incredible Jeremy Irons as narrator. He brought a more inward interpretation of the text, only raising his voice when the orchestra made strong crescendi. Tamara Wilson delivered the actual Kaddish prayer with spot-on intonation as well as penetrating insight into the meaning of the words. Brilliant turns from the choruses and orchestra helped make a very strong case for this work. 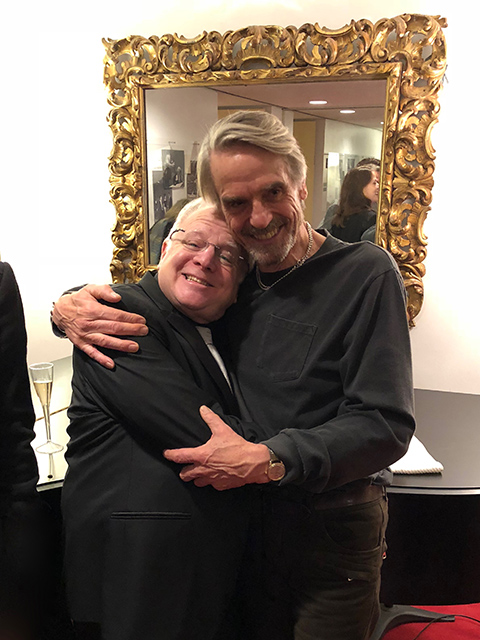 To open the program, I decided to celebrate Bernstein the conductor. In 1943, Bruno Walter was too ill to lead the Philharmonic in a broadcast performance. Bernstein was the orchestra’s assistant conductor and jumped in at the last minute. His performance made the front page of the New York Times, and the rest is, indeed, history. The major work on the program was Strauss’s Don Quixote. It made sense to go back to that important debut and present the piece that launched the first American conductorial star. None of us from the States can underestimate how important that single concert was. Bernstein paved the way for each and every conductor from the U.S.

Portraying the two main characters were Carter Brey and Cynthia Phelps from the front chairs of the cello and viola sections. It was a pleasure to perform this masterpiece with such seasoned and outstanding musicians. It goes without saying that the orchestra was magnificent.

It would not be a Bernstein celebration without a Young People’s Concert. No one used the available media better, and his pioneering work in television brought innumerable people into the world of music. Our concert included several short works by Bernstein, as well as some videos from his own TV shows. We also had guests, including the composer’s daughter Jamie and pianist Makoto Ozone. Cindy and I had the opportunity to spend some quality time with the Bernstein family. They still have almost two years of honoring their father, as the birthday bash continues well into 2019.

In New York, as in DC, there were a number of people to visit and dine with. My brother came over from Jersey for a couple days. Michel Camilo and Sandra stopped by. I had a wonderful evening with John Corigliano and Mark Adamo. So many people and just not enough time to see all of them.

The whole show would move on to Ann Arbor where the Philharmonic has a residency every two years. How strange it was to lead this orchestra and then drive home. But before that occurred, I had the pleasure of hearing the Phil and incoming music director Jaap van Zweden. Mahler 5 was the sole work on the program, and it was most interesting to watch the interaction between the musicians and their new leader. He brought individuality and a very clear vision of what he wanted in this work. Following the concert, I had a chance to get to know him and his wife a bit better over dinner.

The only thing that changed in my concerts were the choruses. The adults were from Ann Arbor and the children from East Lansing. As with their counterparts in New York, they delivered the goods, and Hill Auditorium resounded with cheers for all the participants. Both in New York and in Michigan there were several people in attendance from the DSO to cheer us on. It was most generous of our patrons to attend.

Next it was back to Lyon, but only for one week. Our program would be played once in the Auditorium and shift to Paris the next day. It seems like this time period was one of saluting the pipe organs in France, as both cities were having festivals featuring the instrument. We chose to stay with French music—some familiar works and one European premiere.

Thierry Escaich is one of the leading organists and composers in the country. The ONL has a long relationship with him, but I had never performed any of his music or worked with him before. He turned out to be outstanding in all respects. His quiet demeanor belies the incredible virtuosity he brings to the instrument. Escaich’s Third Concerto is a tour de force for everyone, including the conductor. It is multistylistic, referencing everything from Bach to jazz. Knowing the instruments well in both Lyon and Paris, he was able to really blend with the orchestra. There were many moments when one could not tell who was playing.

Two Pavanes opened each half, one by Ravel and the other by Fauré, including the optional choral part. This made sense because the final piece was the Requiem by Duruflé. I had only performed this work once before, a very long time ago in St. Louis. Written in 1948, it must have shocked the musical journalists, since it harkens back to the one by Fauré in almost every respect. But it is a truly beautiful and moving piece of music. With our chorus from Lyon, called Spirito, both performances were lovely and much appreciated by the public.

To wrap up the European part of the year, we traveled to Antalya, Turkey. I had never heard of this city by the sea, but I love this country and was told that the orchestra, called the Mediterranean Philharmonic, was quite good. When I go to an ensemble for the first time, I usually try and play it safe with the repertoire. That held true in this case, as the program contained the Egmont Overture, Brahms’s Second Symphony and Poulenc’s Double Piano Concerto with the Pekinel sisters.

This resort city can boast up to three million people during the summer season, but in November, it is not too crowded. That made for some wonderful sightseeing, including a visit to the old town and Aspendos, home of an ancient theater with amazing acoustics. And the food was outstanding, with great fish, meats and vegetables aplenty. 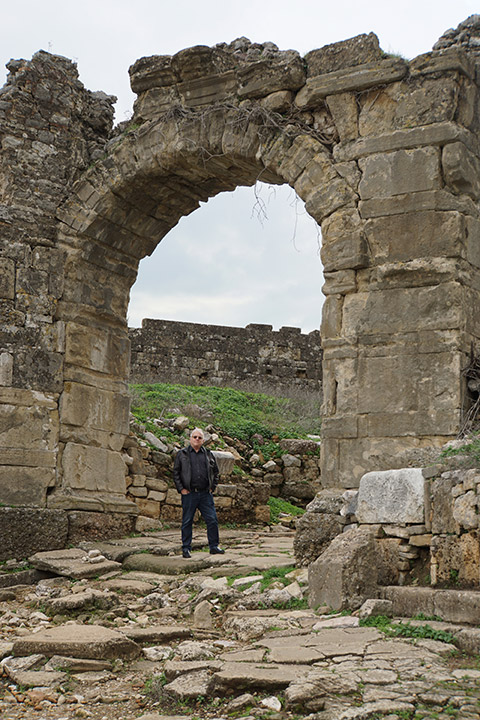 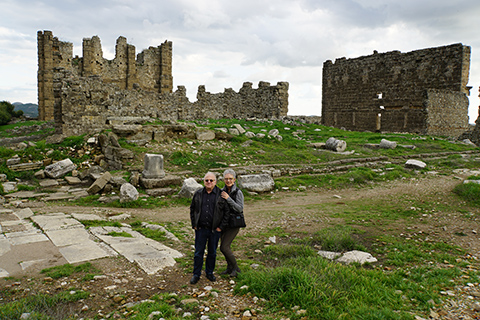 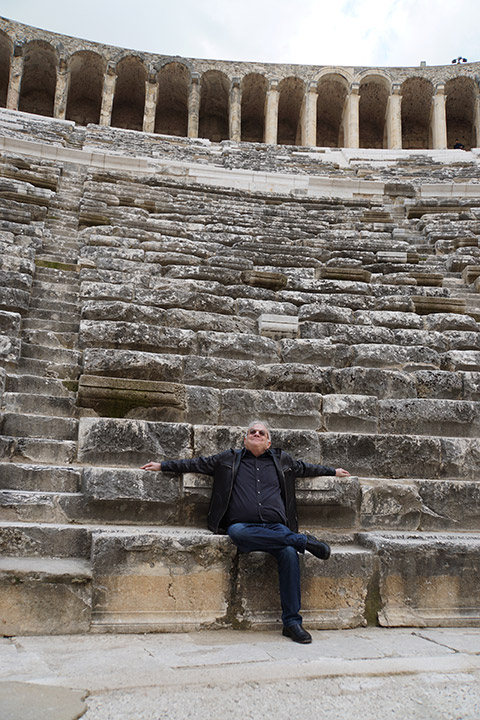 The orchestra played very well, unfortunately in a somewhat dry hall. But they gave their all, and I think we more than compensated for the sonic limitations of the venue. We made new friends, and during a phone call into a Detroit radio station, I said that Turkey was the place to go in order to discover so much of what is positive about the Middle East. Just as in the States, they have their problems, too, but this is a vibrant culture, and we were made to feel right at home.

So why did I have a radio interview? Because it was announced that the DSO had received a Grammy nomination for our recording of Copland’s Third Symphony! The competitive playing field is pretty much equal, so we certainly have a chance at winning. If any of you are members of the Recording Academy, or know people in it, please ask them to listen to our recording and consider casting a vote for us. It would be really nice to have one award from each of my music directorships in the States.

As is tradition now, I will give you some links to my father’s holiday album. Sit by the fire, roast those chestnuts, and don’t forget to vote.

“I Heard the Bells on Christmas Day”

Have a great December and a Happy New Year.