That was the oft-quoted word that characterized my very first trip to the U.S. with an orchestra from another land. February was devoted to the ONL, with a week in Lyon and then a two-week, eight-concert trip to the States.

Taking a full symphony orchestra on a lengthy trip is, literally, always risky business. The promoters in most cities do not want to pay the full fee, and much of the burden falls on the orchestra itself in terms of dealing with the fiscal consequences. But the final result, if most everything goes as planned, can turn out to be a boon for not only the organization, but also the city it represents.

Prior to our departure, there was much preparation, both musically and logistically. We had two different programs to play on the tour, and therefore it made sense to try to perform as much of this music as possible at the Auditorium. For the first concert, we played exactly what we would play at Carnegie Hall, where three of the four works presented would only be given once, in NYC.

Since we were not on Carnegie Hall’s subscription season, we had to self-present. That meant that all the tickets were one-offs, not part of a regular series. It was important to represent France and its music, but also to give something that would interest both the public and the press.

A few years ago we had commissioned the distinguished Arab-French librettist Amin Maalouf to write a text to be inserted into a Ravel compilation of pieces by Rimsky-Korsakov. Seemingly unknown, even to musical scholars, Antar was put together around the same time that Ravel was working on Daphnis et Chloé. The intention was to create incidental music for a play based on an old Arabian tale.

In Lyon we once again had the services of André Dussollier, one of the most prominent actors in film. He intoned the words in a mesmerizing way, bringing an immediacy to the story. It was almost as if he were speaking to each audience member separately. The orchestra picked up right where we had left off from the first presentation, playing as if we had seen this work just the previous week.

Keeping with the theme of exoticism, we included the world premiere of Celephaïs by the youngish French composer Guillaume Connesson. I found myself attracted to his music several years ago, as he honors the traditions of the past masters from that country and puts his own voice into the worlds of Ravel, Debussy and Roussel. The subject matter is a mystical city created by H. P. Lovecraft, and the ten-minute work is a masterful blend of orchestral colors.

Two Ravel works rounded out the program, with the Shéhérazade song cycle and Daphnis being presented. All in all, it made for a very attractive program and worked beautifully as a satisfying musical meal. Hélène Hébrard was the soloist for this masterpiece for voice and orchestra.

We were back at it two nights later with a send-off program, but in this case the first half was American music we would not perform on the tour. I have no idea as to the most recent performance of the Suite from Billy the Kid, but Copland was no problem for the ONL. It was most interesting to hear the solo winds bring their distinctive French sound to this picture of the American West.

We have performed Gershwin’s Rhapsody in Blue several times and with many different soloists. This time it was the young Georgian pianist Khatia Buniatishvili. She brought an impetuous approach to the piece, interjecting the occasional jazz inflections. Every time I perform this piece, and almost all of the Gershwin orchestral canon, I always have a vision of Fred Astaire in my head. He exemplified the refinement and elegance that must come with these pieces.

The second half brought us back to Berlioz’s Symphonie fantastique. This has become, similar to Daphnis, one of the orchestra’s calling cards, and at this point, we can do it with just touchups at rehearsals. But we had the luxury of enough time to rehearse all the details, and it certainly was tour-ready upon our departure from Lyon.

Cindy and I headed back to Detroit so we could regroup for the trip that would take us from the potential freezing weather of the Northeast to the sunny and humid world of the South. Two days later we were back on a plane and headed for New York. There were two days off to get everything in place for the arrival of the orchestra, which got a full day to recover from jet lag. This gave us the opportunity to visit with good friends and for me to do several interviews.

Our first concert was in Storrs, Connecticut, home of the University of Connecticut. Our first lesson was not to perform on a Friday night in a university town when the women’s basketball team is playing. They managed to win their 101st consecutive game, and we had a decent-sized crowd, but it probably would have been larger on a weekday. Still, this was the perfect place to start off, with a little less pressure on all of us.

Our concertmaster, Jennifer Gilbert, was the soloist in Ravel’s Tzigane, negotiating the technical minefields and delivering a nuanced account of this short favorite. We also played my Kinah as well as an early Ravel piece, Shéhérazade, but not the song cycle. This was his first big orchestral work, and one hears where he came from and where he would eventually wind up as a composer.

It was also the first of seven performances of the Fantastique. Of course we know this piece very, very well, and some were worried that playing it this many times would take away some spontaneity, but as the tour progressed we only got better, with brilliant solo playing as well as finely balanced orchestral playing. Each time we played the piece, it was greeted with huge ovations, which were rewarded with two encores. The first was the “Intermezzo” from Carmen, followed by my dad’s Carmen’s Hoedown. With whoopin’ and hollerin’ from members of the orchestra, we played with great humor and always brought the house down.

Next up was Newark, New Jersey, and a change of soloist came into play. The young pianist George Li delivered a fine performance of the first Liszt concerto. We had never worked together before, and I look forward to future collaborations. The remainder of the program was the same as at UConn.

Now we moved on to Carnegie Hall. This program repeated the first concert we performed in Lyon. The soloists changed, with the song cycle rendered by the incomparable Renée Fleming. She brought her velvet voice, and we gave her a magic carpet of sound so she could sing as loudly or softly as she wished. It was wonderful to work with her after many years.

Antar was translated into English and recited by Thomas Hampson. His approach was quite different from that of his French counterpart, with more of a storytelling atmosphere pervading his rendering. Rather than speaking to each audience member individually, he embraced the public as a whole and presented the story as a drama. The reception from everyone was enthusiastic, and it is possible that we have helped create a work that just might have a place in the repertoire.

The Connesson also was received well, but the real showpiece was Daphnis. With an amazing flute solo from Jocelyn Aubrun and absolutely magnificent orchestral playing, we all felt that the ONL was giving its very best. Each and every member of the orchestra shined, and I wished that I could have been in the audience to experience the glory that the Lyonnaise brought to New York from that point of view.

It was wonderful to see so many friends in the green room and over the few days we spent in the city. There was not much time to do any sightseeing, but my assistant, Leslie Karr, and her family made the trip to New York. They had a great time with the kids and packed more into four days than I could do in four weeks.

The story was much the same for the rest of the tour, whether in Winston-Salem; Athens, Georgia; or the three Florida cities we played. Although there were a couple of long travel days, the orchestra got several days off in Gator Land and enjoyed the warm, sunny weather. By the time we got to the final performance, they were all joining in with the “yee-haws” that they initiated the first time we played Carmen’s Hoedown several years ago.

The only glitch came when one of the busses had transmission failure and a rather complex set of bus changes caused them to just barely make it to the hall in Gainesville. In addition, they witnessed an actual collision between a truck and car, giving them a more complete picture of life on the road in the States.

Several DSO patrons who winter in Florida attended our concerts, and I think they were as proud of the ONL as they were of the hometown team. It was lovely to meet and greet them at each venue.

Cindy took some wonderful photos during the tour and here are a few: 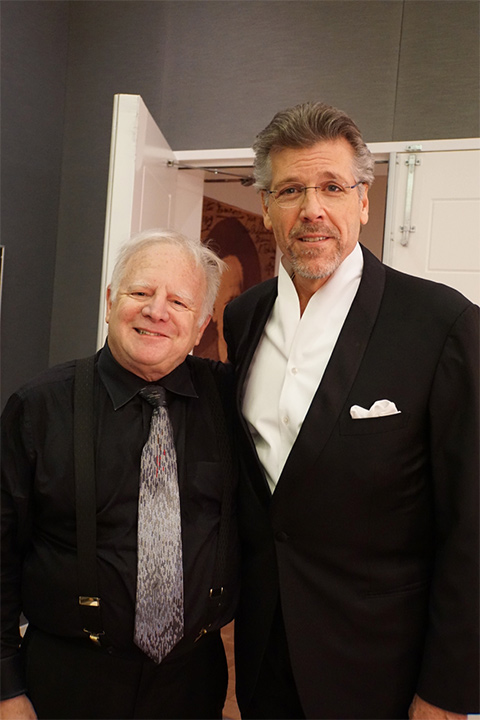 with Thomas Hampson after the concert at Carnegie Hall 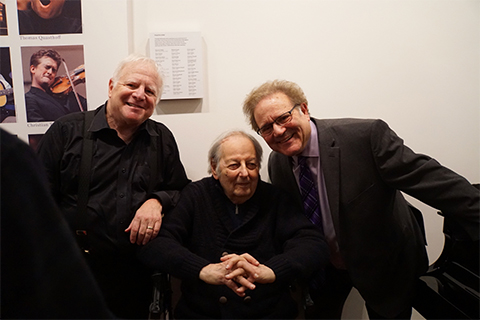 with André Previn and my brother, Fred Zlotkin 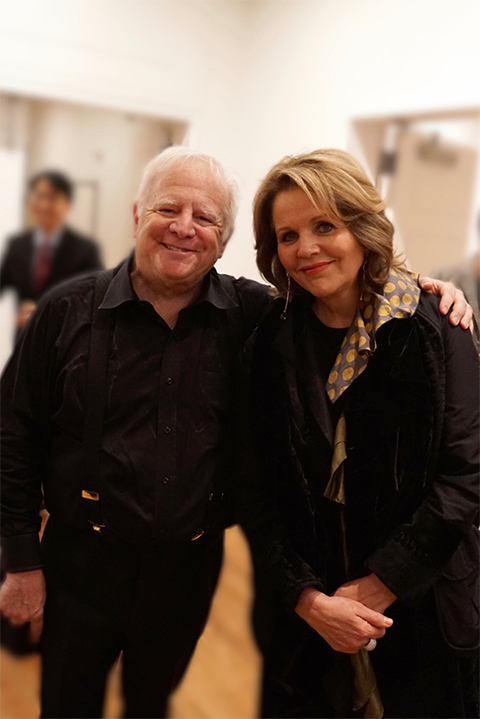 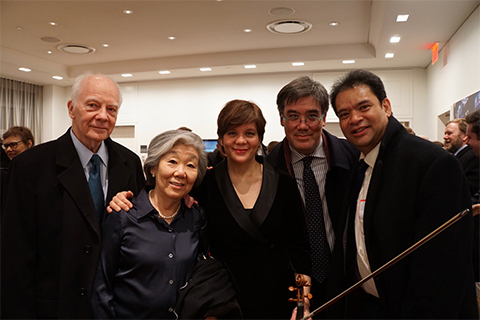 with concertmaster Jennifer Gilbert and family

So February ended with all totally positive reviews and outstanding performances. Hopefully this information will get back to those at the City Hall in Lyon and help ensure their continued support for the Auditorium. We were truly ambassadors for the city, and I know that each member of the orchestra was proud of his or her achievements in the States.

Now Cindy and I will spend a few days at Disney World. We may not have won the Super Bowl, but if there were an equivalent in music, we would be the champions.