The Orchestre National de Lyon’s six-concert, six-city tour of the United States was met with overwhelmingly positive reviews. From Carnegie Hall to the Kravis Center in West Palm Beach, the orchestra lived up to its reputation as “probably the most refined ensemble of the world” (The Guardian). 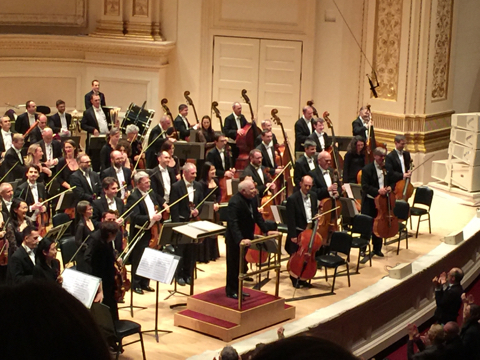 “The program closed with Ravel’s Daphnis et Chloé Suite No. 2, a spectacular orchestral showpiece in a seemingly definitive performance. The opening instrumental texture was sublime and frictionless, brimming with impressionistic authenticity. Every player seemed to have a commitment to this gorgeous emblem of France’s proud musical heritage. Principal flutist Jocelyn Aubrun gave a rapturous account of the famous extended solo, which is followed by one of the most exciting orchestral builds in the repertoire. In this performance, one could almost see the waves of iridescence spilling off the stage. The final shattering drive to the finish left the audience with no doubt they had just heard one of the world’s great orchestras playing their hearts out in repertoire that courses through their veins.”

“The program proper closed with more Ravel, his Suite No. 2 from Daphnis et Chloé, and the effort from Slatkin and the musicians made one wish the orchestra had brought the entire score, with chorus. Still, twenty minutes of Daphnis is better than no Daphnis, and produced a commensurate ovation.”

“The program was wildly demanding, and only an ensemble of the highest levels of virtuosity could bring it off. The ONL is one such orchestra, and Slatkin, for all his years, conducted with the energy of one a fraction of his age.”

“Visiting orchestras from Europe’s second and third cities have been a mixed group, from top-flight ensembles to fourth-tier groups. The Lyon orchestra ranks without question among the first, with nimble, resonant playing in winds and brass and a string sound of its own—unified, tight and honey-edged, but with a transparent texture more refined than the heavy plushness of many of its peers.”

“Slatkin led an extraordinary account of Symphonie fantastique. … The playing of the strings in ‘Reveries, Passions’ was excellent from the start and notably in a fugato passage when the double basses made an incredible rumbling sound, and trumpets and low brass generated excitement during an accelerando prior to the serene conclusion.”