Following the successful tour of the ONL in the States and a few free days at Disney World, it was time to get back to Europe. But in this case, it was to work with two orchestras I had not seen for almost ten years and another that was a debut.

Milan may be the fashion capital of the world, but it is likewise notable when it comes to music and food, two of my passions. La Scala is obviously the drawing card, but the city also has a very good symphony orchestra, known simply as La Verdi. Having made several visits there over the years, I knew what to expect, even though there are many new musicians in the orchestra.

The program was almost all Berlioz, with Cindy’s Circuits put in as the curtain-raiser. American music is not heard often in Italy, so it was nice to present this piece and have the composer on hand to receive the generous applause from the audience. The orchestra navigated the tricky rhythms well, and everyone seemed to enjoy the work.

I only knew Berlioz’s Cleopatra from recordings. It is a strange piece, especially with respect to structure. The Shakespearean text is presented by a mezzo-soprano. Although there are no vocal gymnastics required, the twenty-minute work is demanding. There are times when the orchestra threatens to override the singer, but Lisa Larsson more than met the task. As usual, the composer is up to his tricks, putting some very odd combinations of orchestral texture with the vocal line. The ending features a two-note motive in the double basses that takes on an eerie character as the queen lays dying.

In his third attempt to win the prestigious Prix de Rome, Berlioz was experimenting with a sonic and harmonic world that had not previously existed in France. His railing against the conservative musical establishment was well known, and more than likely, his failure to win the prize was due to the non-progressive nature of the jury. On try number four, he finally plucked the treasure, and used the money to explore Italy while quickly writing the Symphonie fantastique.

It was that work which occupied the second half of our concert. Having just done eight performances on the U.S. tour, I was a little concerned that a bit of ennui might set in, but the originality of this piece continues to amaze me. There is always something new to discover. Performing it with a different orchestra, playing in a completely different style, made the work seem new.

Next it was off to Napoli. This was the first time I had been to the Neapolitan city as either a tourist or musician. Cindy and I had the opportunity to visit the ancient ruins of Pompeii while we were in the area: 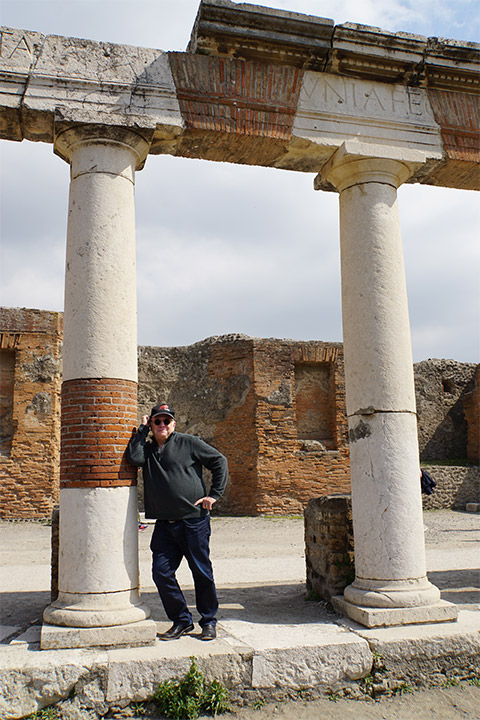 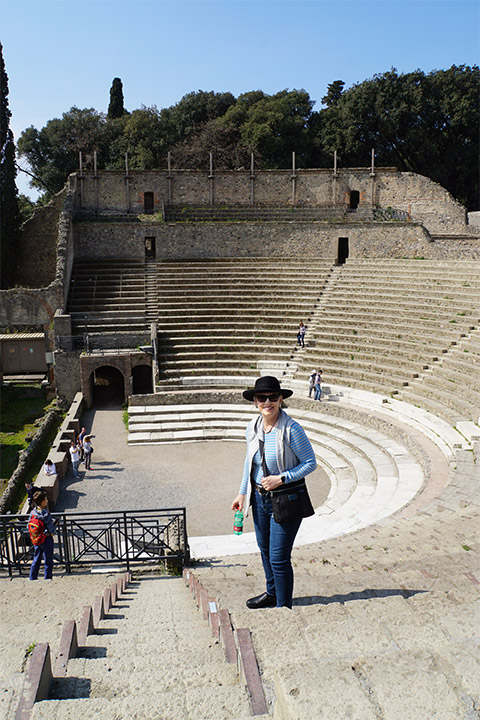 The orchestra I worked with is drawn from the opera musicians of the San Carlo Theater. Symphonic programs are given in this magnificent edifice, and the ambience alone makes it an important occasion. Perhaps because the orchestra serves many different functions, I encountered a few unusual moments, none related to the playing. The first rehearsal was not in the auditorium but rather a rehearsal space dedicated to preliminary readings of both operatic and symphonic works. We only had two hours, so I used the time to just get to know the orchestra by playing through the music on the program. Circuits reappeared, with three other side dishes. Debussy’s Sarabande and Danse in the Ravel orchestration was followed by Saint-Saëns’s Piano Concerto No. 5. The soloist was Alexei Volodin, a pianist with whom I had not previously worked. He proved a fine interpreter of this intriguing piece. Concluding the program was the “Rhenish” Symphony of Schumann.

Following the initial rehearsal, I was informed that a lead singer in the company’s opening night production of Lucia di Lammermoor had fallen ill. They needed to have an orchestra rehearsal for the substitute, and therefore my session with the orchestra for the next day would be cancelled. I felt we had enough time to prepare the program properly and agreed. The trade-off was that Cindy and I were offered tickets for the opening night, the next evening. Hmm.

It turned out to be wonderful. We sat in the box once occupied by Rossini. Seeing a bel canto opera, performed in the beautiful theater and in a traditional production, was quite special. The lost rehearsal was a thing of the past. 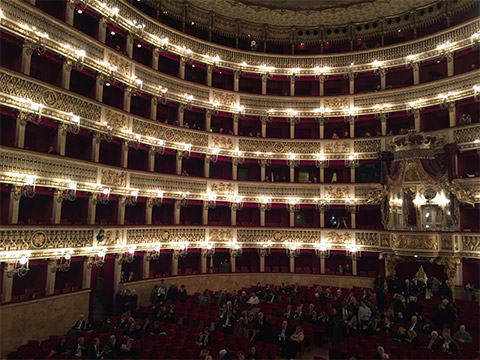 Everyone arrived on time for the session on Thursday. However, the stage technicians decided that they had worked late into the evening of the Lucia performance and needed another hour before they could start. Now we were losing even more time. The orchestra was up to the challenge, however, and we worked efficiently. By the time we got to the two performances, everything was ready, and all went well.

It was also time to start yet another diet. With Naples being the home of pizza, Cindy and I were up to our eyeballs in crust and buffalo mozzarella. But the final stop of the tour was Cologne, so it looked like beer and brats just might be the order of the day.

The WDR is the broadcasting orchestra of the city. My last performances with this group were in 2008, so even though there were a few musicians I remembered, it was almost a new ensemble to me.

A Russian program was requested, and I offered two works each by Tchaikovsky and Rachmaninov. Each composer was represented with a lighter work, and then we plunged into the dark side for the second half of the concert. For me, this repertoire is standard fare, but for the WDR, most of the music was unfamiliar. This meant that I was going to spend some time teaching the pieces on a technical level and then delve into the musical substance.

The orchestra was more than eager to dive into this music. Capriccio Italien and Francesca da Rimini are always a delight to conduct, and the musicians got very involved in the details and overall arch of these works. The same could be said about Isle of the Dead and Paganini Rhapsody. Kirill Gerstein was the wonderful soloist, and I loved making music with him. By the time the concerts were presented, we were all fully prepared, and I could be highly expressive and free, knowing that the orchestra had absorbed all the music.

The audience was extremely enthusiastic, with much applause after each work. In some ways, the people of Cologne remind me a little of the Lyonnaise in that they are all friendly and outgoing. The great cathedral, which dominates the city, is pretty much all that was left intact after the war. Cindy braved the 535 steps and climbed up to the bell tower. Yours truly found several excuses to avoid this effort. 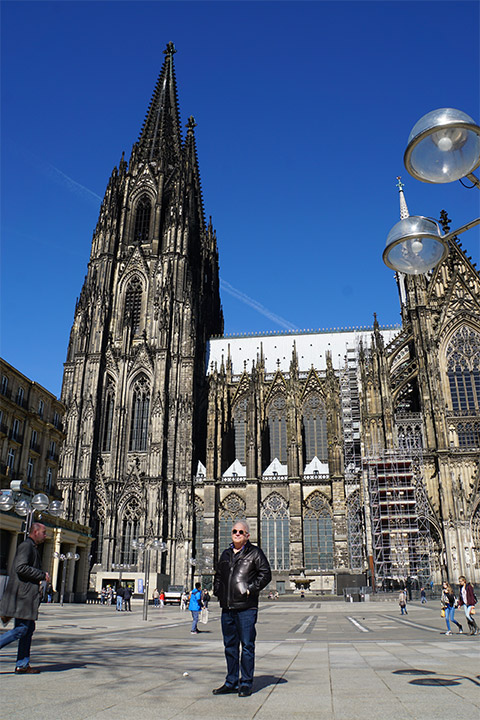 During our stay, we heard a recital by the immensely talented Yuja Wang. One could not help but be impressed by her complete command of the keyboard. With the advertised Chopin and Brahms, I wondered why the program seemed on the short side. That was answered when Yuja played three encores after the 24 Preludes on the first half and then five more after the Handel Variations.

This was an important visit for me, as it was the first one arranged solely by my newly reengaged European agency, Konzertdirektion Schmid. It’s complicated, but I used to be under their auspices, left for a while and have recently returned. Thankfully the concerts were excellent and gave my old/new company a reason to work well on my behalf.

It is unusual for me to discuss political matters in this monthly essay, but the continuing threat to the NEA warrants some comment. Some of you might be wondering why I use the word “continuing?” Let me explain.

The National Endowment for the Arts was created in 1965, with the goal of allowing arts organizations to expand their programs. It has come under fire almost every election cycle as an example of wasteful government spending. Here is a story that tells part of this sad tale.

In 1996, President Clinton hosted a state dinner for the President of China. He asked that the National Symphony play a short program of American music on the lawn of the White House. A tent was set up and, along with soloist Thomas Hampson, we presented Bernstein, Copland and other popular favorites.

After the performance, none other than Speaker of the House Newt Gingrich came over to chat with me. He said, as I remember it, “That was wonderful. I have always loved classical music.”

I was dumbfounded. My only response was, “That makes me curious as to why you oppose the NEA.”

Gingrich replied, “Because my term of office is only for two years. If I told the members of my district that I would apply tax dollars to the arts, I would be out of a job.”

At least I was smart enough to refrain from continuing this conversation. But it is an unfortunate fact of life that political expediency gets in the way of artistic support.

Prior to that, in the mid-eighties, I was summoned to Washington twice to testify on behalf of the endowment. The panel was led by Representative Sidney Yates, a Democrat who was outspoken in his support of the NEA. Although we were already seeing cuts in the budget, Yates came to symbolize, for me, a person who understood why the arts mattered. He argued convincingly, and any further talks of abolishing the program disappeared.

Now we are facing a different scenario. Many in the arts field have written and spoken about the value and meaning of viable government support for what we do. And to me, that is the problem. Almost all of the people who have voiced concern tend to come from our limited numbers of creative and re-creative artists. What I believe we need is for a coalition of persons outside the arts arena to come forward. Sports legends, business leaders, professionals and students who understand that even though they might not have pursued this path of music, painting, sculpture, dance and other forms of artistic expression, the arts provide immeasurable value for the American people.

We cannot let those few who created controversy become the martyrs for the destruction of this agency. Our society should be tolerant of everyone’s right to say what they wish, with no fear of retribution.

If any of you reading this know someone outside of the artistic field, I encourage you to ask them to voice their opinions and to do so in the most public way possible. We may not get much in subsidies, but at least we can show that America values its artists and organizations by lending support. The time is now; the place is here.