Wasn’t 2017 fun? There was certainly no shortage of mind-numbing events and statements coming from all over the world. There are many days when I am grateful to be able to immerse myself in music, as if seeking refuge from elements of society that have gone off track.

What better piece to convey the conflicts that emerged in 2017 than the Ninth Symphony by Gustav Mahler? This work was the final one I would lead before heading off to vacation. There are so many theories as to the meaning of the final completed symphony, it is impossible to state them all.

Was Mahler a visionary, seeing the downfall of his life, music and humanity? Is it his musical autobiography? Or does the work simply exists as number nine, with no extramusical ideas? For me it is a bit of all three, with other matters thrown into the mix. The restudy of this score is just about the music. Even though there are elements from different movements that reappear, it is very much a four-movement work. Each one has a special character, so to me it is the difference in style and substance that is most important.

The DSO had not played the work in ten years, and I had not conducted it for longer. As a music director, I think it is best to wait until your relationship with an orchestra is firmly planted. There is so much ground to cover that you want the musicians on the same page every bar of the way.

It came as a great pleasure, but not a shock, to find the orchestra incredibly well prepared at the first rehearsal. The care that each musician took to really understand his or her place in the orchestral spectrum of the symphony was not only gratifying, but also refreshing. My general rehearsal demeanor is to let the music do the speaking, and I refrain from too much talking. This time there were matters of philosophy that needed to be addressed, in the hope that we would all think the same way throughout the week.

These two performances were certainly among the greatest I have had with the DSO. As the last notes faded away, the audience as quiet as possible, I kept my arms up for a while, only to slowly let them drop to my side. The silence continued as if everyone in the hall just wanted some time to ponder Mahler’s meaning. This was very special. Exhausting, yes, but in the very best way possible.

To open the concert, we had the third in the series of new commissions that are meant to introduce young composers to our audience—and indeed the world, via streaming. Joshua Cerdenia is a student of Christopher Rouse, and the latter’s influence is clear. The ten-minute work is very well crafted and brilliantly orchestrated. Its title is Feuertrunken, or “Drunk with Fire.” This word appears in the Schiller text for the “Ode to Joy,” but also makes a connection with Mahler’s world. Joshua is certainly a composer to watch over the next several years.

After a couple of down days in Detroit, with yet another set of book signings, it was time to put music aside for a few weeks. The first stop was a visit to Cindy’s hometown of Eatonville, Washington. Near the Seattle/Tacoma area, this town of abut 1,500 has much charm and certainly a lot of fresh air. And there are two dogs, Bits and Kibbles, whom I love to tease and play with. 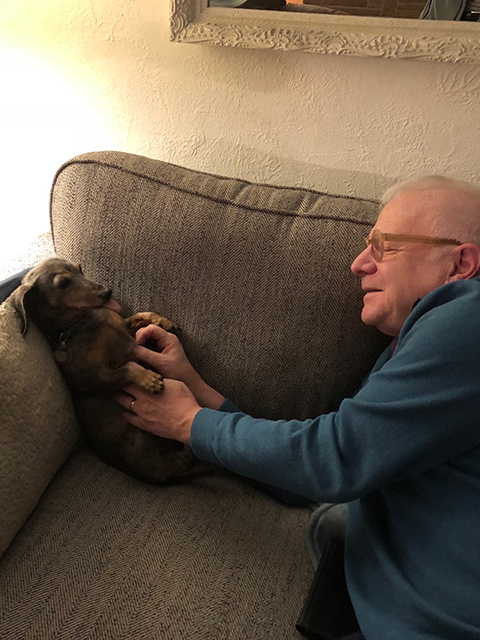 Next, we went south to LA, primarily to visit Daniel and his fiancée, Bridget. My son’s first big music-scoring project comes to life in January, when Making Fun: The Story of Funko has its release. He also has several other projects on the table. We all enjoyed going to the Grauman’s Chinese Theatre to see The Last Jedi in all its glory on the IMAX screen and in 3D.

There have been mixed reviews about Episode VIII, but I thought it may have been the best of the whole series. This one is really about the storytelling as well as the overall look, especially in long-range shots. I was drawn into it from the start and, as usual but never without awe, John Williams continues to amaze. All the familiar tunes are there as well as some new motifs to represent recent character additions.

But having said that, if I had to pick one moment that was jaw-dropping, it was near the end when abruptly, at the height of a battle sequence, the music stops entirely and we see mostly still images. Perhaps it is because the music seems to be continuous throughout the film that this shock to the system was so powerful. I believe I turned to Daniel and just said, “Wow!”

There were friends to visit as well, including Tom Newman, who was a classmate of Cindy at Yale. What a fine person and great composer he is. At the same lunch was his agent and longtime friend, Michael Gorfaine. Later in the week we had dinner with Carol Goldsmith, wife of the late Jerry, one of Hollywood’s legendary film composers.

And there was this. Around 5:30 in the evening, we looked out the window of the car and saw something that truly wanted to make us believe in UFOs. Turns out it is from the SpaceX satellite program, but still, for about thirty minutes, government conspiracy theories danced in my head. 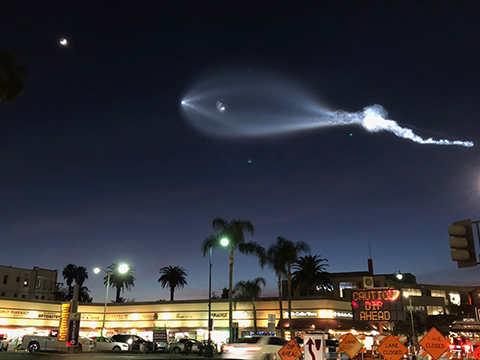 The kids are doing well, and I got another doggie fix when we went to visit Daniel at his apartment. Winston has his own Instagram account, and he will probably get a star on the Hollywood Walk of Fame. 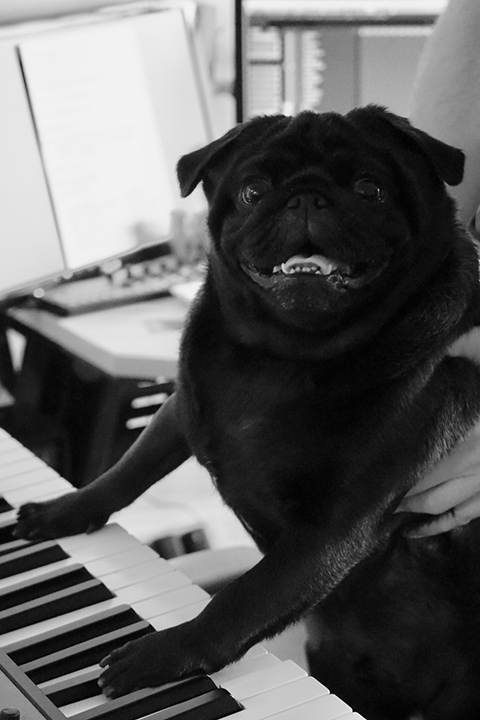 As can be imagined, there were plenty of opportunities for good dining. With that in mind, not to mention the accumulated weight gain from the past year or so, we decided to do something about it. Canyon Ranch is what used to be called a Fat Farm but is now a Wellness Center. There are lectures, nutritionists, instructors and even a psychic. It is a wonderful place with a variety of programs to support a healthy lifestyle. My focus was on stretching as well as upper and lower back exercises to prevent occupational hazards. I also chose to attend three cooking classes, and assuming that we are ever at home for an extended time, I will try to replicate the recipes. 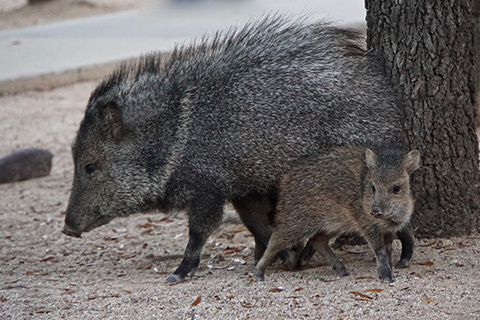 There is a very bizarre animal that pops up every day around four in the afternoon. The javelina looks like something from the Jurassic period, but there appear to be several families of them around. The little ones are cute, but since the adults can tear apart a cactus, it seemed judicious not to get too close. 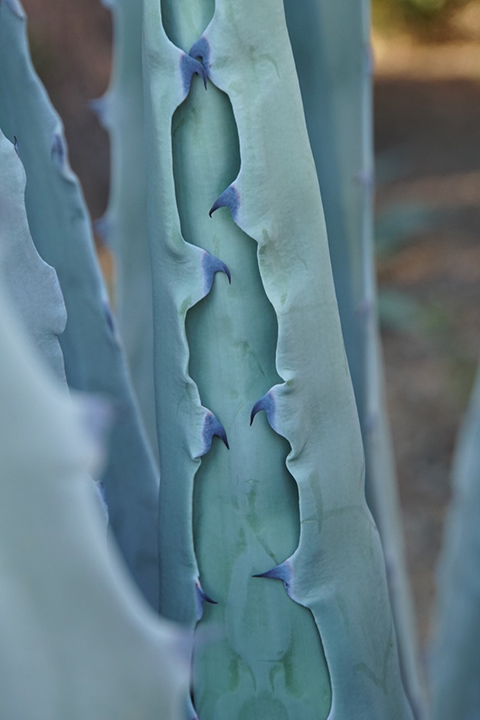 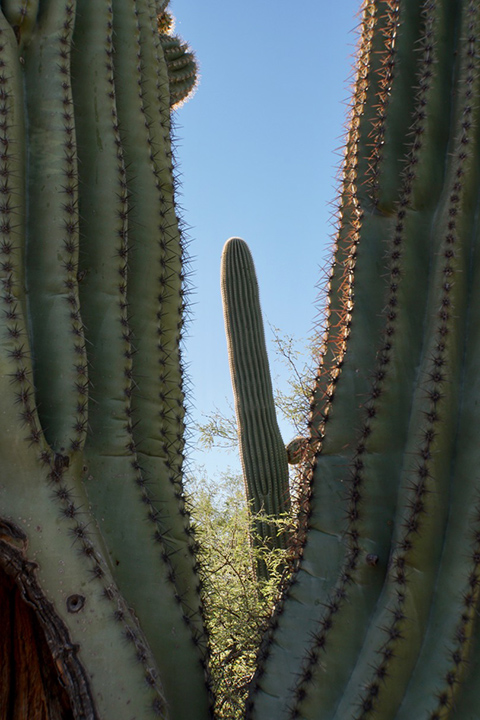 Several pounds lighter and with a new approach to eating, we headed off to Sedona. With its miraculous rock formations, this idyllic place seemed like the right spot to end the time off.

There is some news that I wanted to share with all of you. Starting in June, Cindy and I will relocate to Clayton, Missouri. We had considered many cities as our base of operations, but with four generations of Slatkins having been there, plus the fact that Cindy and I met in St. Louis, this seemed like the best choice. It is centrally located for travel, it has great medical facilities, and we have many friends there.

Some people have wondered if I am retiring. That is far from the case. It is time to put aside the administrative side of the profession and focus on the music making. I expect to conduct about 28-30 weeks as a guest and use the rest of the time to write two more books. There are also some music composition projects I want to get to, and I would like to do a bit more in the education world. Of course, Cindy and I are also very interested in taking time off for travel and leisure.

Let me take a quick moment to thank all my readers, who have stuck it out for over ten years. Let’s see what the next ten bring.