It is not often that I get a relatively calm month in the middle of the concert season, so January turned out to be a nice breather before the heavyweight demands of the next months. With the DSO French Festival on the horizon, as well as assorted dates in Europe, Cindy and I thought that we could couple concert-giving with R&R.

The first week of January had us wrapping up our Arizona getaway. I had never been to Sedona. Just staring at the majesty of the rock formations was enough to take one’s breath away. It is not difficult to understand why so many artists have been drawn to this part of the United States. Inspiration is visible throughout the region. 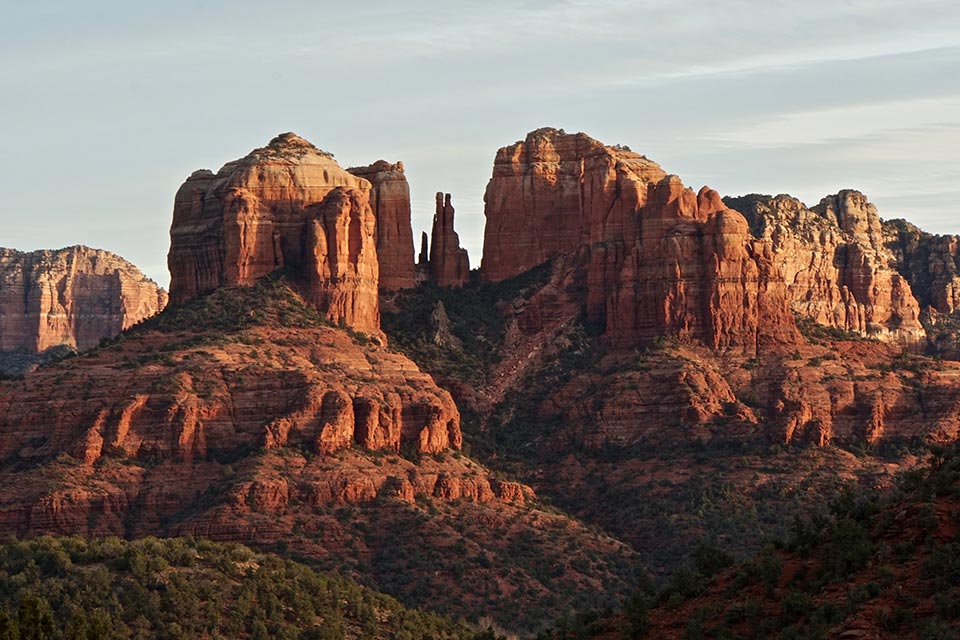 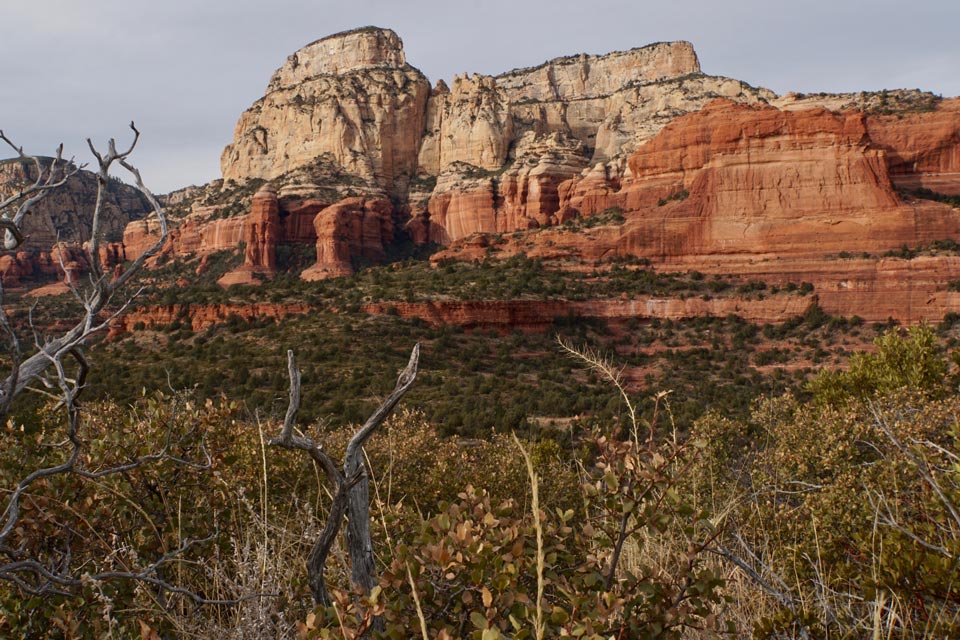 Upon returning to zero-degree temperatures in Detroit, there was a lot of work to accomplish. The first rehearsal with the orchestra was actually a continuation of the Manhattan Project. Not the nuclear option, but the one for conductors in conjunction with the music school. Manhattan School of Music conducting graduates Malcolm Merriweather and Timothy Cho came to Detroit, as well as Jim Gandre, President of MSM. The two conductors took to the podium to lead the same pieces they had rehearsed and performed in New York.

The main object of this initiative is to give young conductors an understanding of how different it is to work with a very good student ensemble as opposed to a fully professional one. Each conductor had about an hour to rehearse and play through his pieces, the Tannhäuser Overture and the Second Essay of Barber. The orchestra members were encouraged to give feedback immediately, even interrupting if necessary, to clarify what they needed to see and hear from the conductors in order to perform their best.

Another aspect of this project is that each conductor spends time with me before and after rehearsals, learning how I approach each session. Since we were performing neighborhood concerts, all the rehearsals took place at Orchestra Hall, but none of the performances did. So a lot of our talking was about how to deal with differing acoustics. In addition, the two young men met with various heads of departments at the DSO. As they move forward in their careers, each will have received very practical information as to what a music director’s role really is.

The program that I led in three venues included the charming suite from Fauré’s Pelléas et Mélisande, as well as Mozart’s “Jupiter” Symphony and the Second Piano Concerto by Beethoven. Our soloist was twelve-year-old Harmony Zhu. Yes, that is right. Just twelve. And she has been performing since her sixth birthday. Bubbly and bouncy, Harmony showed why her talent has been on display for these half-dozen years. One can’t know what path she will take in the future, but should she choose to stick with music—she is also a chess grandmaster—I suspect that her journey will be successful.

Following the final concert and book signing of the weekend, Cindy and I headed off to Katowice, Poland. This was my third appearance with the Polish National Radio Orchestra, and the high level of respect I feel for this ensemble grows with every visit. Each trip also represents a kind of homecoming for Cindy, as she spent much time studying with Krzysztof Penderecki in Krakow.

January is not the best time to visit Katowice or other cities that fall prey to winter blasts. I only know a bit of the neighborhood near the hotel and the concert hall. This recent structure is excellent, perhaps a bit drab on the outside, but warm and vibrant within the walls. The sound is rich, and it is clear that the orchestra members can hear each other quite well.

Unusually, each piece on the program ended quietly, and at first, I was concerned that the works would seem depressing. But it turned out that they worked very well together. We started with my own Kinah, a piece that I usually explain to the audience. However, my Polish is not up to snuff, so I simply let the piece speak for itself. If you are new to this website and don’t know the genesis of the work, you can learn about it here. The audience and orchestra seemed to be caught up in the piece.

Ernest Bloch’s Schelomo seems to be making a bit of a comeback these days. I have performed it almost once per season for the past four years, each time with a different cellist. The soloist for this concert was Tanja Tetzlaff, sister of the violinist Christian. Although I have worked with her brother quite often, this was my first time collaborating with Tanja, who brought an elegance to the piece, coupled with a strong sense of storytelling. I consider this work to be a symphonic poem that happens to have a solo part as well. Glad to have it back and making the rounds again.

Tchaikovsky’s “Pathétique” was the concluding work. I am fortunate to have the luxury of being able to send a set of string master parts to orchestras when I am performing standard repertoire pieces. This saves a lot of time, as we do not have to spend the rehearsals trying to figure out if something will be up or down bow. The focus can be on sound, balance, ensemble and structure right from the first session together. It paid off for the concert and showed the flexibility of the orchestra in a performance that was truly moving.

There was a free day before our next flight, so we went to Krakow to visit with Cindy’s former teacher, Krzysztof Penderecki. The maestro and his wife, Elzbieta, were in great form, and I feel fortunate to have had the opportunity to get to know them. At 84, Penderecki seems young at heart and composes every day. In addition, his conducting activities take him around the world. We will see the couple again, as well as the orchestra, in April. This will be for a concert in Warsaw for the annual Beethoven Festival, which has not a single piece by the namesake on the program. Mahler 2 will have to suffice.

My travels have taken me to Greece four times. Each was with an orchestra on tour, leaving little or no time for sightseeing. Determined to rectify that, Cindy and I spent ten days taking in the sights, sounds and flavors of this remarkable country. Most of our trip had us based out of Athens, where we could see the Acropolis from our hotel room. Although I have nothing against tour groups, it is just something I do not like to be a part of, so instead, we hire a car and driver to show us the places of interest. This has the advantage of allowing us more flexibility in terms of time spent in different locations.

It never occurred to me that at this point in my life, I would be so interested in ancient civilizations. Now that we have explored Rome, Mexico, Turkey and Greece, to name a few, all those history lessons from long ago come to life. Walking in the footsteps of Apollo, Zeus, Athena, Diana and assorted mythological creatures makes me wonder why some cultures seem intent on destroying the legacies left behind. Remarkably, many of the artifacts and structures have been well preserved. It really is astonishing. Here are a few images that Cindy captured, now that she is pursuing a new career in photography. 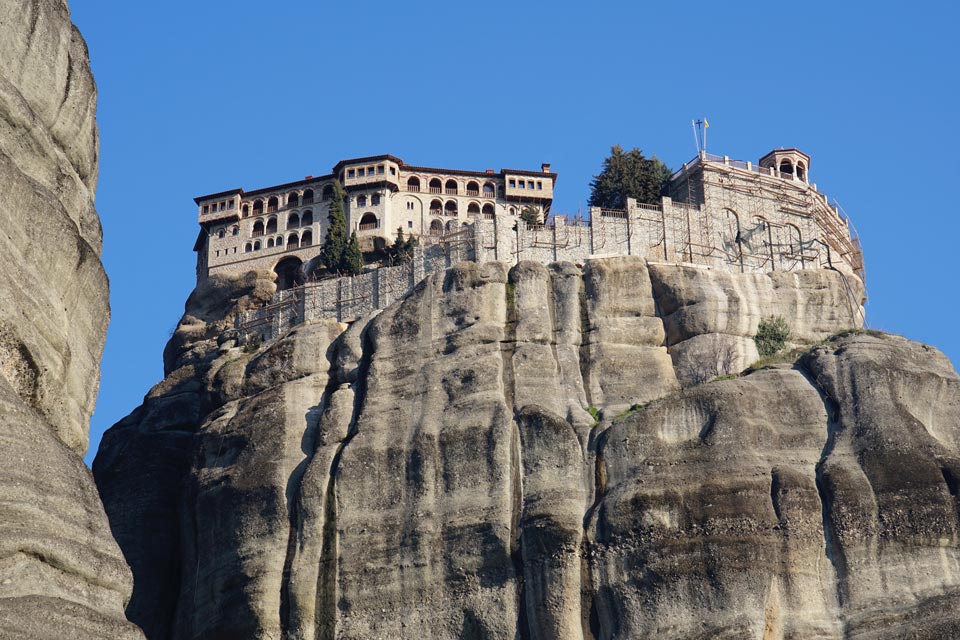 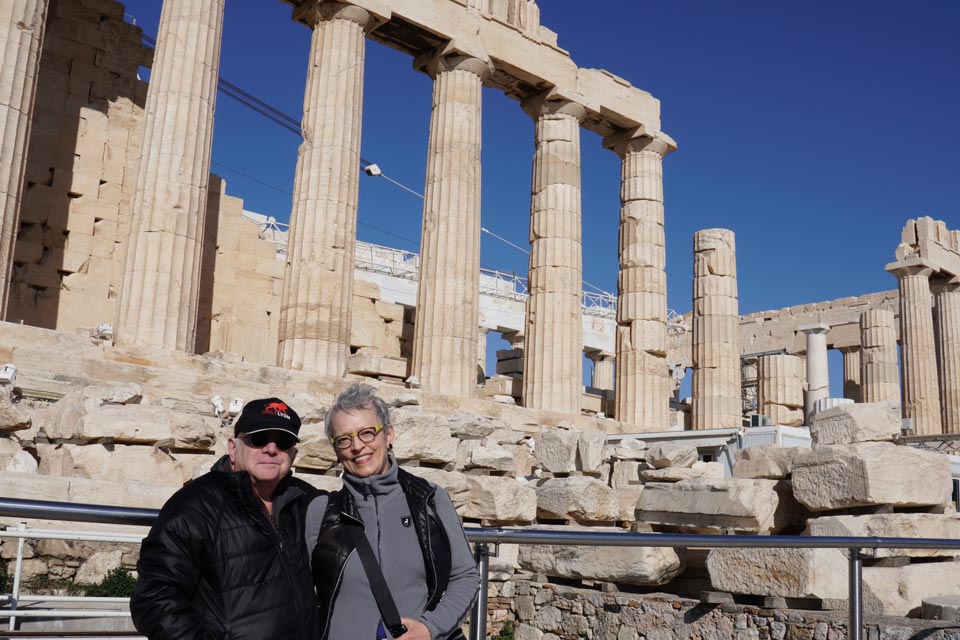 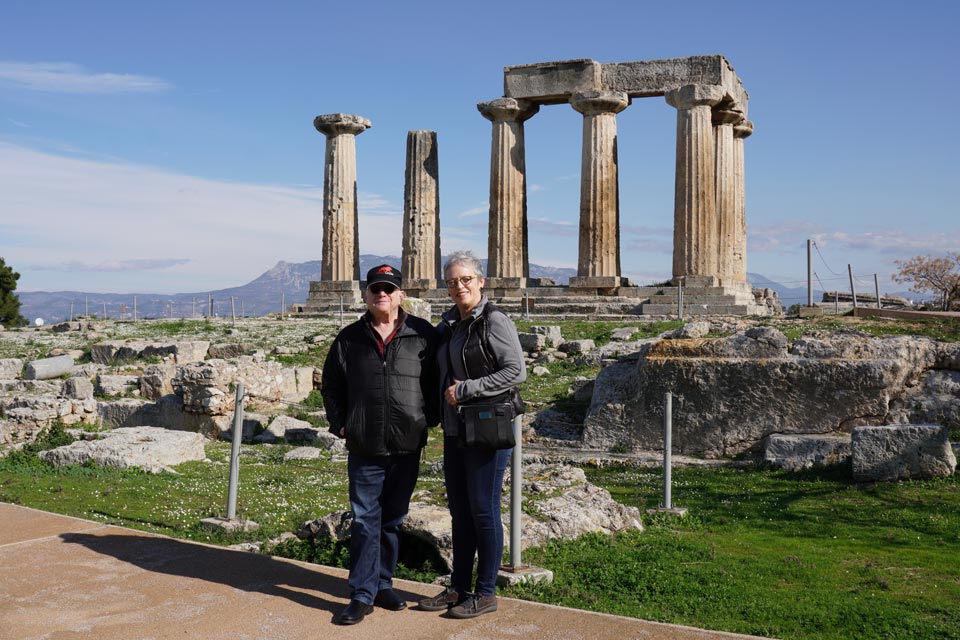 Temple of Apollo in Corinth 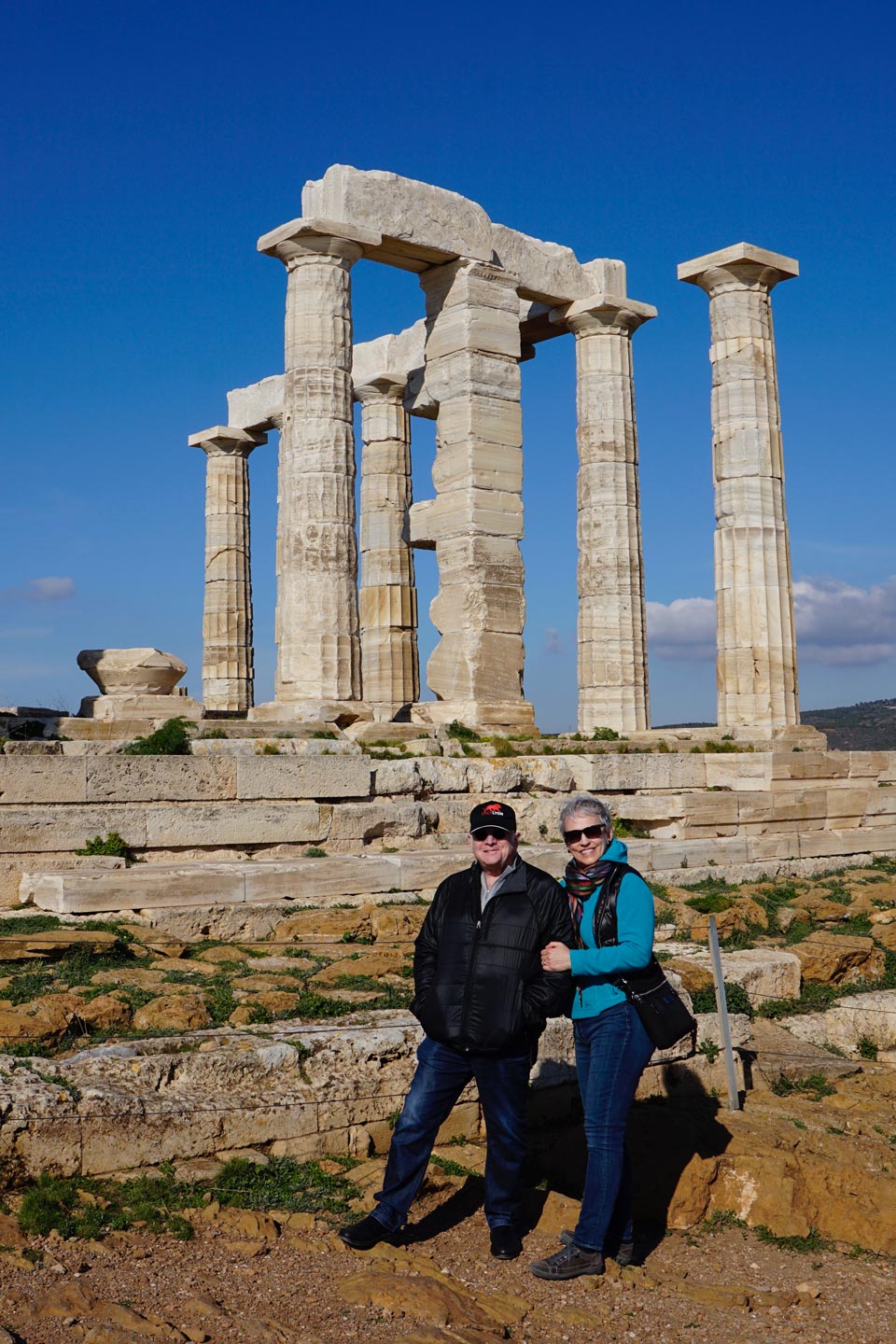 And then there is the food. Last month, both of us started a healthier diet, and this was a good place to continue that. By eating ample vegetables, enjoying great fish, and leaving out dessert most of the time, we may not have lost weight, but we most certainly did not put back the poundage from last year. And all that trekking up and down steps built thousands of years ago did not hurt.

Like many of you, it is very hard not to be angry or frustrated by the news these days. Through the magic of VPN, I am able to watch real-time coverage of pretty much everything. This includes the annoying commercials that seem to be even longer than the newscasts. After a while, certain phrases and words become predictable. Here is a list of twenty-two of them I hope never to hear again:

You can add your own, but at this point, some of them actually provoke a physical reaction when I hear them.