Extremely intense three weeks in the States, with a lot of hard work and results that made it all worthwhile.

With only one day to recover from jet lag, I launched into Mahler’s 10th Symphony with the DSO. Most of you probably know that this is the work that was left incomplete, as the composer died while writing the piece. Never mind that he was superstitious about Beethoven’s death following the German master’s 9th; Mahler left enough information via sketches for several editors to try their hands at conjecturing what this last work might have sounded like.

The composer had completed most of the first and third movements, but it is well known that usually after a first performance, extensive revisions would follow. Since he never heard either his own 9th Symphony or Das Lied von der Erde, it could be argued that those pieces are also incomplete. Nonetheless, the 10th evaded most musical scholars until the British musicologist Deryck Cooke embarked on piecing the work together in the ’60s.

I was present at the New York premiere given by the Philadelphia Orchestra under Ormandy. It was an overwhelming experience, especially considering that prior to that evening, I truly did not like Mahler’s musical world. Not having previously paid much attention to that composer, I could not really tell what made this so moving. Quite possibly it was that the orchestra was so superb. From that night on, I began to delve into Mahler, his life and his music.

Although I had performed the Adagio as a separate piece, a practice embraced by many conductors, I did not take on any of the so-called completions in my early years. Upon examination of the sketches, I had my doubts about Cooke, as it seemed a little on the safe side. Gilbert Kaplan called to my attention a version by Remo Mazzetti, and when I saw it, I felt that Mazzetti had a better grasp on the world of late Mahler. In 1994, I presented it in St. Louis, took it to Carnegie Hall and Washington DC, and then recorded the piece. It also served as a vehicle for a few guest conducting dates.

In Detroit, I decided to revisit the Cooke, now in its third incarnation. Considering some of Mazzetti’s contributions, plus many of my own as well as suggestions from the musicians, we came up with a version that felt good. We tightened up the first Scherzo, made changes in orchestration in the fourth movement, and arrived at a great decision regarding the controversial drum strokes that start the last movement.

Since we know that Mahler was in his hotel room in New York while writing the 10th, it is easy to surmise what he heard that caused him to go to his window. It was the sound of a drum being played at a procession to honor a fallen firefighter. There has been much discussion regarding the type of drum it might have been. I decided that it was a military instrument, most likely without snares. But since Mahler heard it from his room, the sound must have been muffled and distant. So we placed the drum offstage, and this seemed exactly right.

The musicians worked very hard on this difficult piece, and the performances were moving as well as satisfying. I am not sure when I might program this symphony again, but at least I feel that we got a little bit closer to what the composer intended.

The first part of the program featured guitar concerti by Vivaldi and Chris Brubeck. Sharon Isbin was the ideal interpreter of these works, especially because the Brubeck was written for her. I think the Vivaldi must have been premiered by someone else, and not on the guitar! It is always a pleasure to collaborate with Sharon, and we are hoping to do a couple projects around my composition teacher, Mario Castelnuovo-Tedesco. The Brubeck was well written for the instrument, and with discreet amplification, the guitar was never covered by the orchestral forces.

During that week, Cindy headed off to her hometown of Eatonville, Washington. Both Eatonville High School and Pacific Lutheran University were honoring my wife for her contributions to music and those communities. I wish I could have been there, but there was much satisfaction in knowing that her parents could see their little girl celebrated in such a fashion.

Next it was off to Baltimore, but not to conduct the BSO. Instead, I went to the Peabody Conservatory to work with their young students. This was a very busy week, with conducting classes, seminars, rehearsals and recording. These days, in addition to my two weeks at the Manhattan School of Music, I try to do one other musical institution, gauging how our arts education is impacting the future.

There was no question that the students were gifted, with some exceptional solo turns from the winds and a nice, rich sound from the strings. We spent three days recording the Flute Concerto and Air by Aaron Jay Kernis. The former was premiered by Marina Piccinini and me last season in Detroit. This is a very difficult piece for all concerned, and it took a lot of concentration, almost to the point of obsession, to get every detail clear. Unfortunately, this also took up time that could have been used for the other repertoire on the concert.

That said, the orchestra did a fine job with the Russian Easter Overture and the Enigma Variations by the time we did the concert. I was able to deliver my hour-long talk about what it will be like for them after they leave school. This is usually a sobering experience for those who attend, as I speak about trying to achieve dreams but also acknowledge the reality of the music profession these days. Those of you who get my next book, Leading Tones, which will be published this fall, will read about my thoughts on this matter. 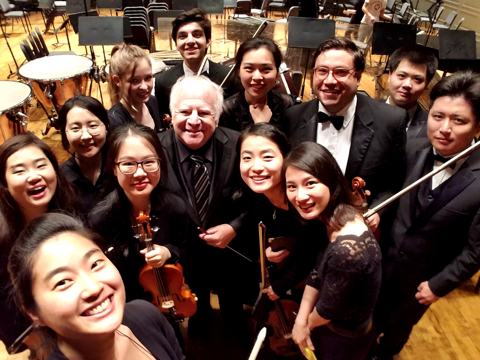 with the students of the Peabody Conservatory

I had one night free to go into DC and spend an evening with some dear friends. They were from the media world, and as you can imagine, there was a lot to talk about. In some ways, I think they were grateful for a little bit of conversation about my world, just to take some of the edge off.

Back in Detroit, we had the most eclectic program of the season. With a first half devoted primarily to Bach, and the second half being jazz-related, it was difficult at first to see the connection. But somehow it all worked well, probably because there was so much engagement from orchestra, soloists and audience.

Two original Bach works, the Prelude from the Third Partita and the orchestral version of the same music for organ and orchestra opened the concert. This was followed by Lukas Foss’ Phorion, a work I first heard at its premiere in NYC with Bernstein and the Phil. Uncharacteristically, the Maestro did not say a word about the piece before playing it, and many of us were shocked beyond belief.

The Foss takes its starting point with the Bach Prelude being washed onto a beach, notes scattered all along the shore. There follow several intrusions, including a race between the flute and piccolo to see which musician can finish the phrase first—very riotous, very ’60s and a lot of fun today. Unlike the “other” Leonard, I spoke before the performance, and perhaps that helped the audience understand what was going on.

Three orchestrations of familiar Bach works wrapped up the first part, with transcriptions by Ormandy, Barbirolli and Stokowski. I think most of the younger members of the orchestra did not care so much for these, as they seem out of date, but for me, this was the way I first encountered Bach. The orchestral versions were very popular in the ’50s and before. With only a few halls housing an actual organ, this was the only opportunity to hear these masterpieces. So the nostalgia factor was high for me.

After intermission came the first Jazz Suite by Shostakovich. Scored for only a few instruments, it seemed charming and delightful. But the Soviet version of jazz was miles away from what was happening in most of Europe and the States. The inclusion of a Hawaiian guitar, replete with slides, brought giggles from the musicians and public.

For many years, I have been encouraging my friend Michel Camilo to write a Concerto for Jazz Trio and Orchestra. My nagging paid off, and the result was a virtuoso stint for the three plus the DSO. With Ricky Rodriguez on bass and Cliff Almond at the drum kit, there was no question that the energy level would surpass Spinal Tap’s 11. Caribbean riffs alternated with African rhythms. Lyrical moments would caress the ear. And the sheer madness of the concluding movement brought everyone not only to their feet, but also a few inches off the ground, I think.

As much as this was a huge success, the most touching moment came after the second performance, when Michel returned for a second encore. He played a slow blues improv that led smoothly into the Gershwin Second Prelude, haunting to a fault and played as the composer intended. I knew that Michel was doing this as a little gift for me. I will treasure that performance forever.

Good food and drink followed. There is nothing better than camaraderie after an excellent performance. In fact, even if the concert is not great, the bond between musicians is so strong that we simply move on to the next project, still enjoying a quaff or two. 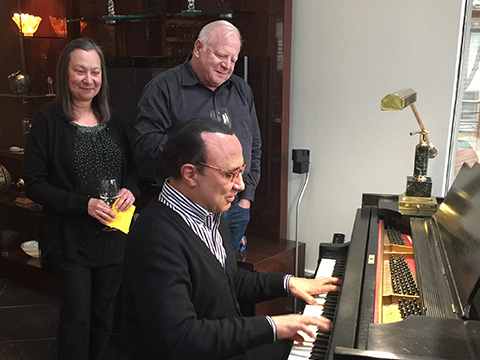 For me, it was back to Lyon, with a week of concerts and then a tour of Germany with the orchestra. But those stories will have to wait.