Greetings from Fort Worth, Texas, where I am serving as Chairman of the Jury for the Fifteenth Van Cliburn International Piano Competition. But that opening yell was not just about yellow roses. As you will read later, it became the calling cry for my French orchestra.

May started off with my next-to-last trip as music director of the ONL. It hardly feels as if six years have passed since I began my post in France’s second city. The time has flown by, and we have all accomplished a great deal together. Even with regime changes in our administration, we have all grown, and we enjoy a great reputation throughout the world.

There was a lot of work prior to a two-week tour to Germany, Paris and the Netherlands. It all began with a presentation of the season. Our new CEO, Aline Sam-Giao, presided in her first appearance before the Lyon public. Not only did she and I speak, but members of the orchestra gave little cameos as well, including one featuring the first violist and one of his section members duplicating a scene from Titanic. I didn’t know that so many of my musicians were also terrific actors.

This season, one of our composers in residence has been John Adams, on the occasion of his seventieth birthday. He was in attendance for performances of The Chairman Dances as well as Harmonielehre. As we were putting together that program, we also needed to prepare the tour repertoire, so there was an awful lot to do in a short ride. 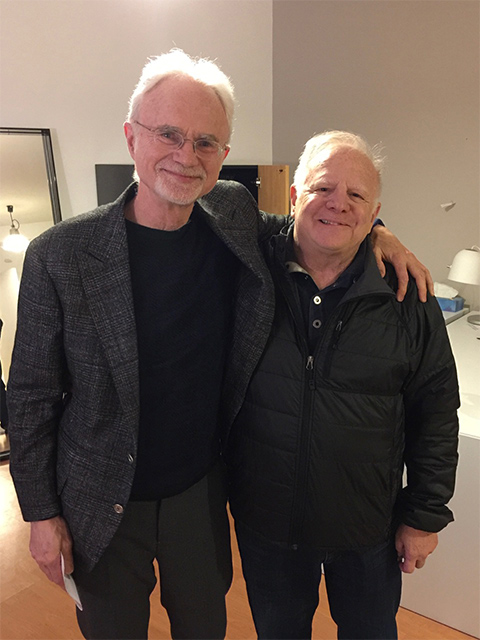 With John Adams in Lyon

Hilary Hahn was the soloist both in Lyon and on the tour, this time with the Tchaikovsky Concerto. It had been several years since this incredible artist had performed the work, and as usual, we spent a great deal of time rehearsing. Knowing that we would have nine shots at it, we wanted to develop a true sense of flexibility so that by the time we hit the road, we would be prepared for any interpretive nuances. 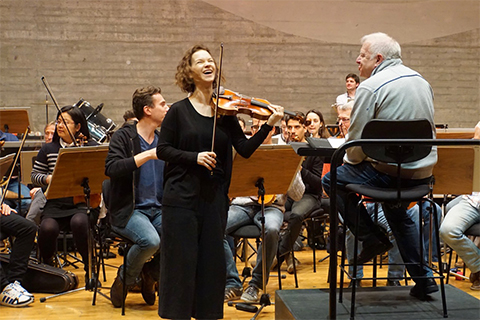 The night before the dress rehearsal, Hilary participated in an event that took place in a sort of warehouse-style building in the now-burgeoning Confluence region of the city. She was charming and really into playing for this relatively young crowd. We even decided that I would teach and conduct the audience in a vocal version of the accompaniment that takes place for eight bars in the Tchaikovsky. At our performances, I could see Hilary mouthing the syllables we assigned to the orchestral wannabees.

Because of the season announcement and the demands of preparing both the tour rep and the Adams pieces, we did not see John’s music in the forty-eight hours leading up to the Lyon concert. Normally there would have been a true dress rehearsal, but time was limited due to our playing what is called an “Expresso” concert as well. At least we could get in the Chairman Dances and another piece for the tour, César Franck’s Le Chasseur maudit.

During the Expresso program, we invited three members of the audience up to the stage to “lead” the orchestra in our encore pieces for the tour. One of them, a gentleman who comes to virtually all the ONL performances, was selected, and the tears streaming down his cheek testified to how much this meant to him. Of course, I was standing right next to the three maestros and subtly helped out as needed.

Although we certainly could play the Adams pieces, I thought that we could have done them better with more preparation time. Having performed John’s music right from the time he was starting out, I was a little disappointed that he did not hear the ONL at its very best. Nevertheless, we were able to redeem ourselves when we performed The Chairman Dances in Paris on the tour.

After February’s hugely successful American tour, another two-week jaunt seemed daunting. Indeed, several of our ONL musicians had developed physical problems that prevented them from going on the German trip. In addition to getting ready for the heavy schedule, we also had to take the substitute musicians through all the music we had performed in the States. Originally, I thought that just a touch-up would be required, but now more time was eaten up by having to play through and rehearse what for us is usually standard fare.

The really good news was that the extras were superb. It did not take them long to fit into the way the ONL and I do Ravel and Berlioz. The Fantastique was exactly that, especially in Paris. At the Philharmonie, one of the fine new concert halls popping up in France, the performance was greeted rapturously by the audience, and the orchestra knew that this was something to cherish.

Altogether we played this work in eight out of the nine concerts we gave on the tour, which started in Nuremberg and ended in Utrecht. Almost all the halls were excellent, and we played to full houses throughout. Hilary was dazzling, bringing spontaneity and her incredible sound to each performance. We have been working together since she was fourteen years old, and to see her develop into one of the greats has been a privilege. 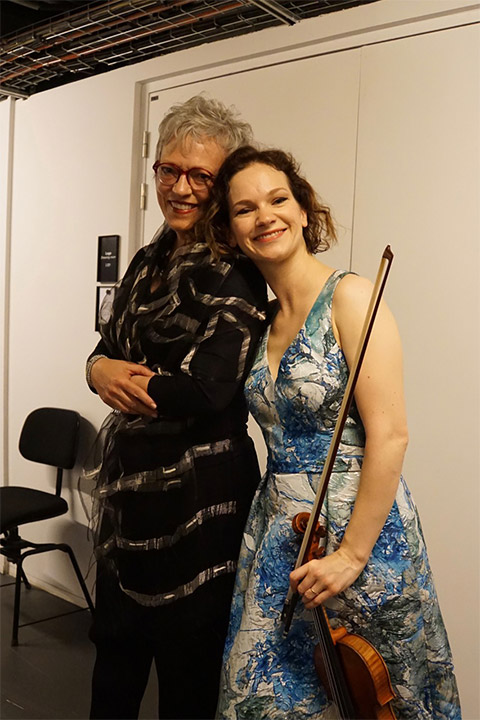 Cindy and Hilary backstage in Paris

The surprise of the trip was going to Eindhoven. This is the home of the Philips Corporation, and I don’t mean the screwdriver. It was the one place where I had no idea what to expect. What I found was one of the finest concert halls in the world—warm, clear and ideal for the members of the orchestra to hear each other onstage. I told the audience how fortunate they were to have this true jewel in their city.

I stuck with the same encores as we played on our Asian and American tours, the Intermezzo from Carmen followed by my father’s “Carmen’s Hoedown.” At first, I was not sure how this would go down with the German audiences, but after each performance, they went wild. It got to the point where one member of the orchestra suggested that maybe we should only play that piece for the whole tour. That would make the concert three minutes long, and we could get to the restaurants much earlier.

There were yee-haws aplenty from the ONL. This tradition started when I first arrived with the Hoedown six years ago. A few members of the orchestra began shouting this word while we were playing. Now it has almost gotten out of hand. At the final concert, the principal violist signaled to all the women in the orchestra to shout out the command. At the party following that performance, Cindy showed them all how to really do it, since she had lived in Texas for almost thirty years.

This tour was so much fun—exhausting because of the travel schedule, but always energizing thanks to this group of musicians. Although I will be returning to them on a regular basis, I will truly miss their devotion to music-making, their sense of humor and their friendship. 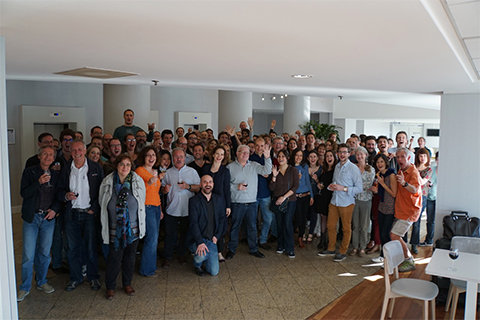 Celebrating after the final concert in Utrecht

A tough week followed in Detroit. Beethoven Nine is always demanding, but when one tacks on another work, unfamiliar to all, the task is even more daunting. In this case it was a piece by John Corigliano that I had never performed, his Mr. Tambourine Man. The conceit of the piece is that it uses the texts of Bob Dylan, but the music is all original Corigliano. This is not out of step with composers from the nineteenth century who would use the same words and set them in their own voices.

What a remarkable piece this is. Right from the start you know that the music is by John. Originally writing it for piano and voice, he orchestrated it three years later, in 2003. As usual, his command of the instrumental forces is unmatched. But his selection of the poetry was also revelatory. Having survived the Sixties, I remember all too well the impact of what Dylan was trying to say to those of my generation. Here were those words again, reminding us that not much has changed in the world today.

Ending with “Forever Young,” the piece offers at least a glimmer of hope. As delivered by the incomparable Hila Plitmann, Mr. Tambourine Man moved us beyond the concert hall to a place that we can only wish existed in the world today. Hila is simply unmatched for this kind of piece. Dramatic when needed, lyrical and hushed as required, she embodied both the composer and the lyricist. What a true honor it is to continue to work with her.

The parallels with the Beethoven may not have seemed obvious, but when Beethoven, not Schiller, tells us, “Friends, stop all this dissonance,” he could have been an earlier incarnation of Dylan. The DSO, UMS Choral Union and soloists distinguished themselves at all four sold-out performances. I left Detroit feeling uplifted and gratified by this incredible week of music-making and soul-searching.

Here in Texas, as I write this, we are about to start the Cliburn, with six pianists on the docket today. As head of the jury, I am tempted to find them all guilty. Not sure what the charges are, but next month I will try and give you a sense of what it is like to go through what is a grueling two-and-a-half weeks of competition. And I am just talking about those of us who are judging!