And a very Happy New Year to all of you!

It is getting more and more rare for me to spend this time of year at home, and this year, I could be found in the Far East. But the journey began in Lyon.

We wrapped up the old year with a concert of familiar French fare, however some of the pieces were new to many in the orchestra. Take for example the Zampa Overture by Harold. This piece, which used to be a staple of the concert band repertoire, hardly gets a hearing nowadays. We played this delightful, almost Rossinian romp for an afternoon crowd who seemed curious about a piece from their own country that they did not know.

Soloist for the week was Renaud Capuçon, probably the foremost French violinist around these days. His deft handling of the Saint-Saens 3rd was exceptional, and I am really looking forward to seeing him again in September.

Most of the pieces we played were in preparation for a tour in China. Originally we thought that performing a work by a Chinese composer would be a good idea, but the concert presenters just wanted French music. So only the Lyon audience heard Extase, by Quigong Chen. The soloist, Jean-Louis Capezali, was extraordinary. We had recorded the work several years ago but it had disappeared from my memory. This time it made a stronger impression.

It was only a five-day stay in Lyon, as we were headed off to Hong Kong for a few days of R&R. I realize that this term is not usually associated with that city, but Cindy had never been there, and Daniel was going to join, so it amounted to a mini vacation. It was also an opportunity to spend some time with Klaus Heymann, head of Naxos records. We were kindly invited for Christmas Eve dinner at his home and treated to some wonderful dishes as well as good conversation.

The first time I was in Hong Kong, I bought some clothes from one of their most respected tailors, and I decided to return on this visit. 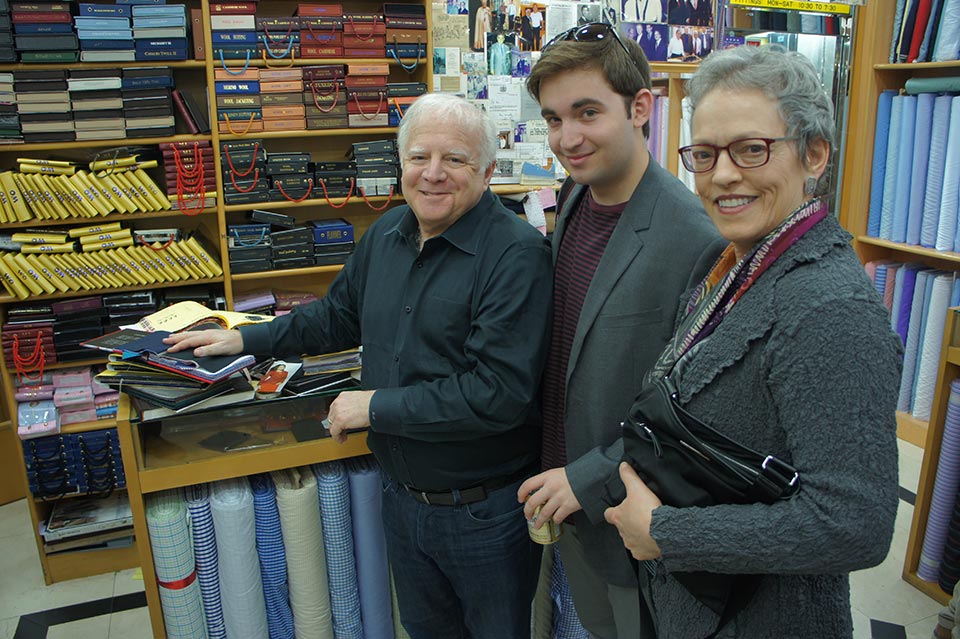 Prices have gone up a bit, but still, if you buy enough, it is well worth the trip. We also spent a few hours in Macau, where I played two hands of something called Caribbean Poker. After losing the first draw, I picked up a full house and won $8,000! Oh, they were Hong Kong dollars but still not bad for a single hand.

Pollution was high, and even though the temperature was moderate, we all wished for a rain shower to wash the smog away. It never appeared, and after a couple days, our eyes started to water. But we enjoyed this little visit very much.

The first stop on the China tour was in Guangzhou, a city I really did not know much about prior to this trip. In fact, it is the fourth largest city in China with about seventeen million people. Because of the population density, there are numerous skyscrapers and tall apartment buildings. We had a day off upon arrival, which began with a somewhat harrowing four-hour car ride. The concept of staying in one designated area does not exist here. If the highway has two lanes, the drivers create a couple more.

Even more air pollution awaited, and I was worried that it would hamper our sightseeing, but the next day was much better and we got to the top of the Canton Tower. The view must be incredible on a clear day. Even so, one could take in the breadth of the city from 112 stories up.

A visit to the Six Banyan Trees Temple was followed by a trip to the market. Here one could get any medicinal herbs in existence as well as some, like bees wings or deer penis, that are probably best left to the Chinese. Having unsuccessfully searched for “scorpion on a stick” in Hong Kong, we did manage to find the little monsters in this market. They were for sale, but you had to take the critters home alive as they were not cooking them up.

The ONL had arrived the night before with 14 pieces of luggage gone missing. Spirits seemed high, however, as they were excited to be on tour for the first time in many years. The musicians were eager to chat, and that would appear to be the main reason that hotel lobbies were invented.

Our first concert was the next day, with a rehearsal at the Guangzhou Opera House in the morning. This structure, just a couple years old, is ranked as one of the best in the world. A shell is placed for non-operatic events and the sound was surprisingly warm and clear. Some of the orchestra members had not yet fully recovered from jet lag, and we were a bit sluggish, but a play-through of the program was in order.

After a number of interviews, I returned to the hotel where the orchestra from Valencia was checking in. It seems that they had a concert the next night with Zubin Mehta. At the same time, the Royal Philharmonic from London was also visiting with Yoel Levi. There is obviously a thriving music scene in Guangzhou. 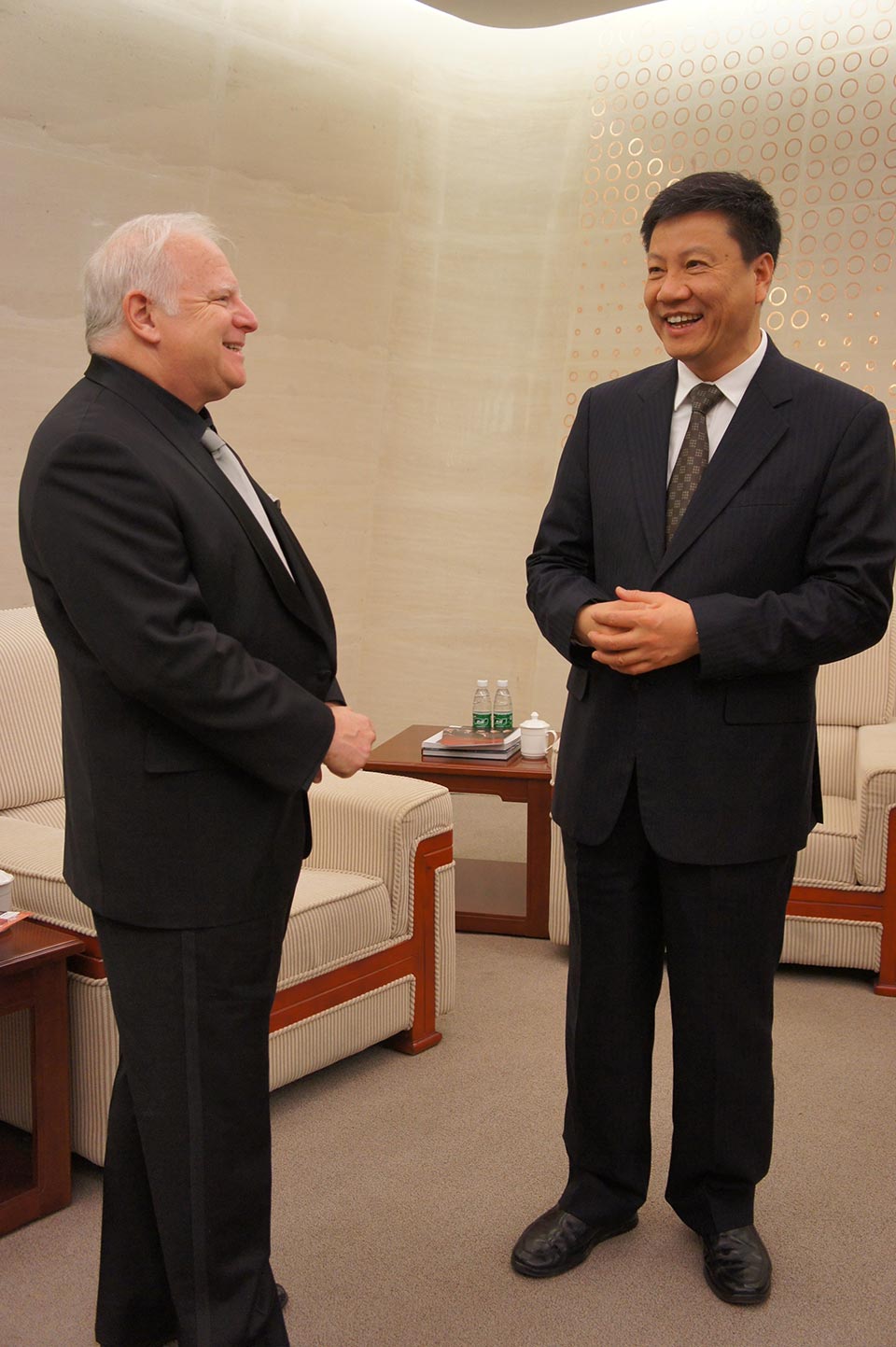 A pretty full hall greeted us for the concert. At first, even with a program of lighter French pieces, the audience seemed a bit reserved. But by the time we got to La Valse, they erupted in what could only be described as a non-Chinese manner—whooping and cheering that seemed more suited to a rock concert. The mayor of the city was present, and we had a lovely chat. In addition, I was made an honorary artistic advisor to the Guangzhou Opera House.

At first, I had thought not to play the encore of Carmen’s Hoedown, arranged by my father, but the orchestra wanted to do it. This brought the house down, and the audience got the intended musical jokes. After this, the only piece that could be played was the Can-Can to wrap up the program.

The next stop was Shenzhen, very close to Guangzhou. This city is only 30 years old, so it stands in stark contrast to its neighbor. There are no signs of traditional China, so the only way locals and visitors can experience the past is to go to something called “Splendid China.” Here are miniature replicas of China’s major tourist attractions, spread out over almost 300 acres. There is also a companion theme park about an hour away known as “Tea Stream Valley, where copies of European villages can be seen.

We performed in an opera house that produces only two operas per season. The sound was not bad and the audience was enthusiastic, but since the city is new with only a one-year history of presenting foreign orchestras, the crowd was small. The concert took place on New Year’s Eve, and afterwards we went to dinner with the family of one of Daniel’s former high-school buddies.

Hangzhou is an older city, but there was no time to sightsee. By the time our flight arrived, we more or less rushed into rehearsal. After the performance, we had a celebratory reception to bring in 2014, and the orchestra clearly seemed to enjoy themselves. Following that, we headed to the car for a two-hour drive to Shanghai.

Now I was on more familiar ground, having conducted here on three other occasions. And with a full day off, there was plenty of time to look around. This bustling city of 20 million combines big, modern architecture with impoverished neighborhoods. We went to the silk museum, visited the Shanghai Museum to see the bronzes, and also attended a performance by the Shanghai acrobats, contributing to the booming economy by being dutiful tourists.

A couple members of the DSO are from Shanghai, including Michael Ma, assistant principal bassoon, who treated us to lunch. Attending the concert were Tan Dun and my good friend, Larry Foster, who was on tour with the MDR Orchestra from Hannover, Germany. Once again, cheering audiences greeted the performance. Afterwards, we had an outstanding Hunan dinner, and Larry and I exchanged what seemed like endless stories from our younger days. 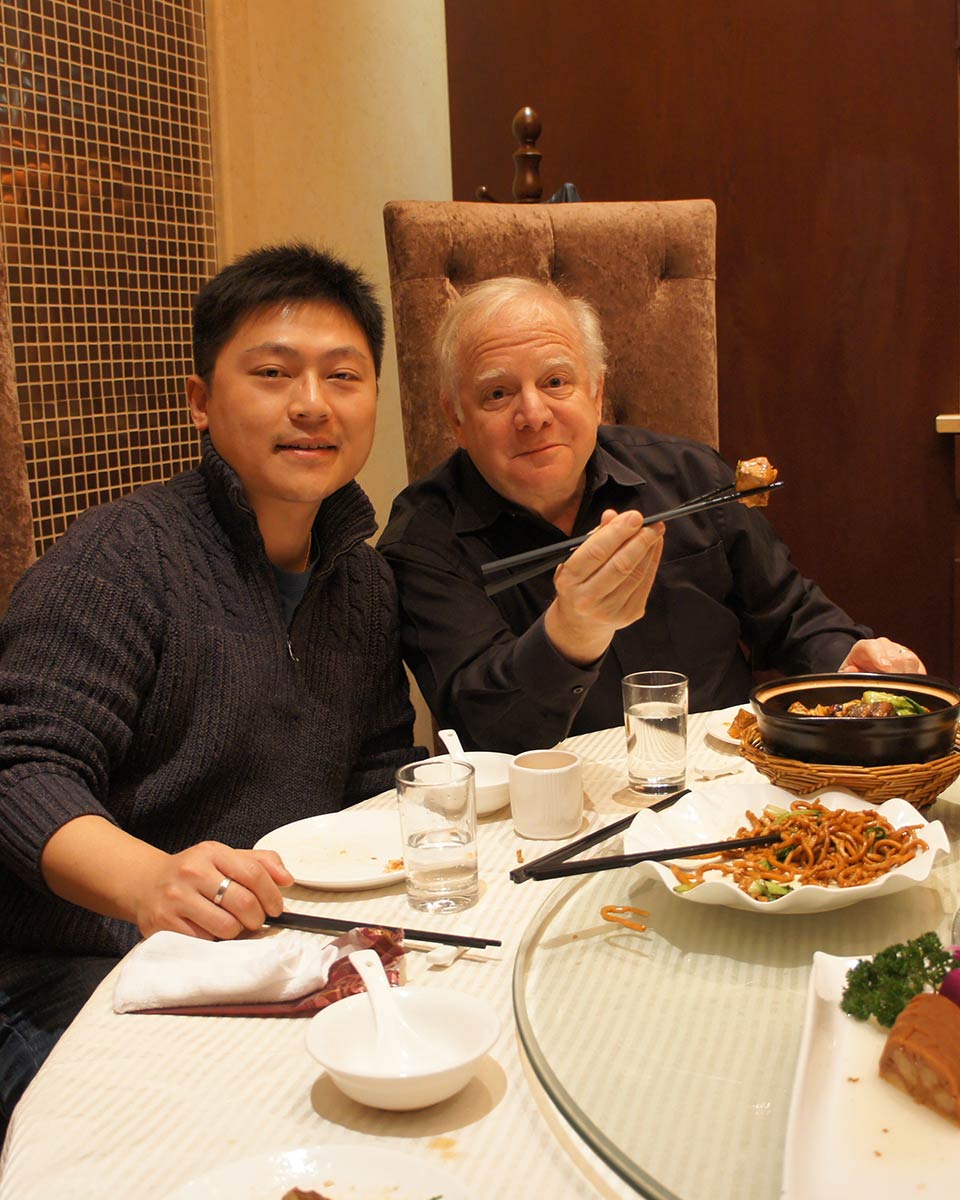 Michael Ma and Leonard in Shanghai 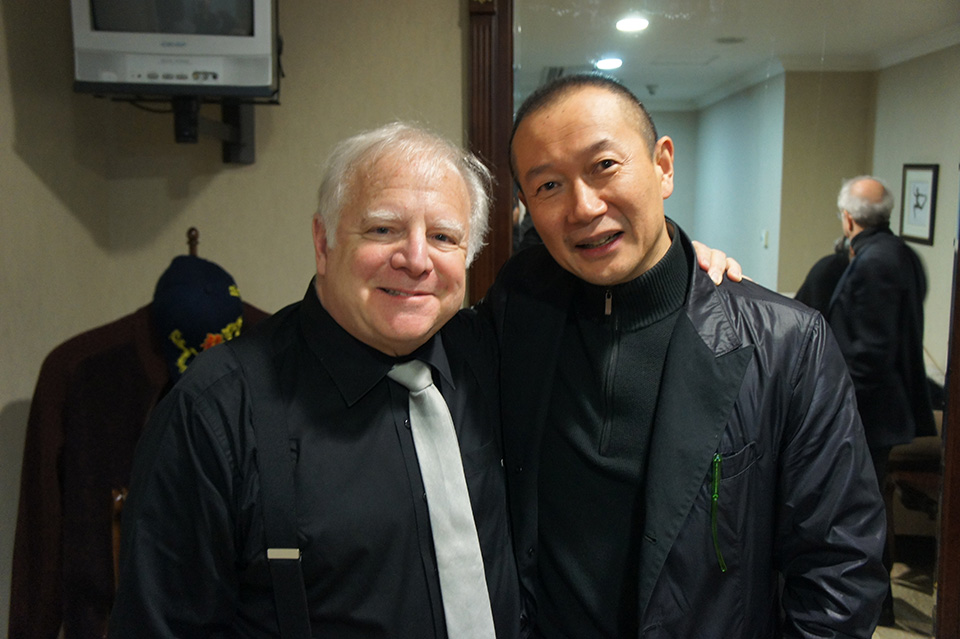 Leonard and Tan Dun in Shanghai 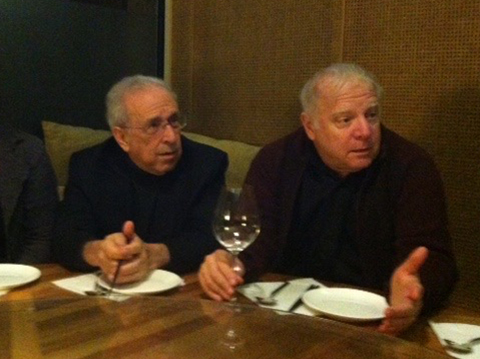 Leonard and Larry Foster in Shanghai

Finally, it was off to Beijing, the last stop on the tour. This was a bit tough, as we had a morning flight, then an hour’s drive into the city. After checking in to the hotel, it was time to get to the hall for interviews and press conferences, not to mention a rehearsal, concert and reception. It is possible that I have never been more photographed in my life, and all of you readers know how much I love photo shoots.

The concert capped off a very successful trip, once again with an energized audience that did not want to let the orchestra leave the stage. Some goodbyes to all our new friends and good wishes to the members of the orchestra finished off the night. Everything went without a hitch, and considering the logistics of moving everyone from city to city, this was quite a feat.

The whole experience was illuminating. Probably no country has undergone such dramatic changes. Yes, some websites such as Facebook and the NY Times are blocked. Pollution is barely tolerable. But overall, this remarkable country is clearly at the leading edge in today’s marketplace. At this point, I am not sure when I will return, but it is clear that when that time occurs, I will see even more changes. 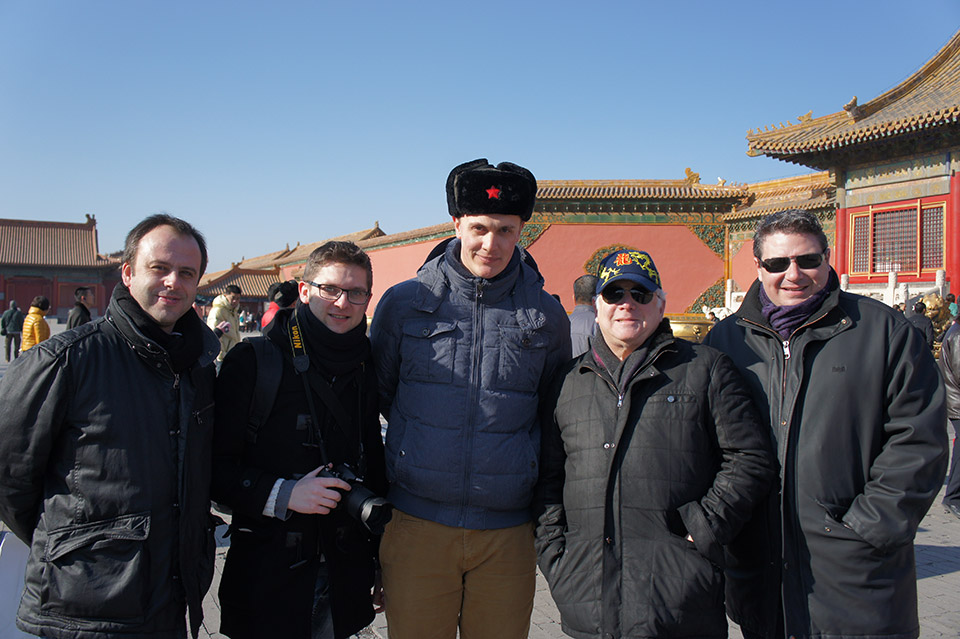 ONL musicians and Leonard at the Forbidden City

Now it is time for a real vacation.