The Cubs won the World Series for the first time since 1908! Donald Trump was elected President! Cindy and I moved out of our Lyon apartment!

November was a very strange, and extremely busy, month.

It started off with—well—nothing. I was supposed to lead the Pittsburgh Symphony in a set of subscriptions concerts, but the orchestra remained on strike, and I simply stayed at home. After two months a settlement was reached, but it was a couple weeks too late for me to lead the orchestra. Hopefully the resolution will keep the peace for the time being.

My annual visit to St. Louis was next, with plenty of activities to keep me occupied. It all started with the unfortunate cancellation of our soloist, Olga Kern. We were to have done the Barber Piano Concerto, a work closely associated with the orchestra and me as a result of our performances and recordings featuring John Browning. I have done the piece with a couple other pianists but thought that Olga was perfect for it. Happily, Olga has returned to good health, and we will open next season in Detroit with this piece.

Finding a pianist on very short notice for this difficult work was not so easy, as only a handful of pianists play it. Elizabeth Joy Roe had recorded it and was available so, even though I did not know her playing, it was decided to keep the repertoire and take the risk. Everything turned out well. She has the requisite technique and a very fine sense of freedom where needed. I showed her a few tricks that John used and she took them all in. It was certainly fun to revisit this work in my old stomping grounds.

The rest of the program was also of American music. Copland and Gershwin, likewise associated with my music directorship in St. Louis, were on the menu for the second half of the program. The Billy the Kid suite and Bennett’s Porgy and Bess suite made for a colorful conclusion. But there was one more item. Cindy had been going through some of my dad’s arrangements, taking them down note for note from recordings and making orchestral transcriptions of some of them. This time it was “Devil’s Dream” from the Hoedown album.

To open, my own Kinah had even more meaning than the previous performances. Once again, my brother came out to take the role of our mother with the offstage cello part. But our dad was born in St. Louis, so an even greater sense of poignancy emerged from these performances. Now that the work has been played by three different orchestras, I am very pleased with the results and think the work stands on its own, even without the backstory.

47 years ago, I founded the St. Louis Symphony Youth Orchestra. My visit this time made it possible for me to conduct one piece on their season opener. The “Meistersinger” Overture fit the bill, and the young musicians did an excellent job, having been well prepared by their music director, Gemma New. When I started the group all those years ago, I thought of them as my children. I realized that this time, I was conducting my great grandchildren. It is very possible that of all the things I accomplished in the Archway city, this orchestra was my proudest moment.

There were friends to see, dinners to go to, and a horrible hockey game to attend. Still, St. Louis is a reminder of where my professional career began, and I am always pleased to return. 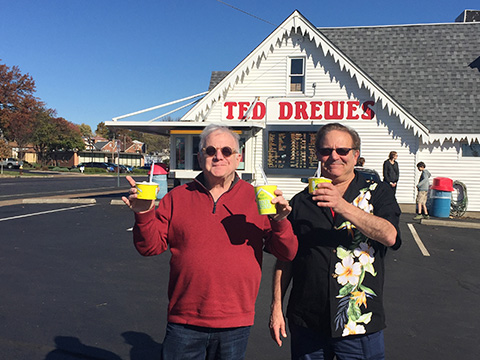 at Ted Drewes for frozen custard with Fred

There was one other big surprise. One of the women working in the library, Roberta Gardner, casually mentioned that there were a couple boxes containing what appeared to be onion skin paper that had my father’s arrangements on them. It seems that when I left the orchestra as music director, I never thought they would be useful, so I left them behind. Now that we are involved in transcribing the charts, it is time to comb through the past and what can be made from them. I always assumed they were either destroyed or lost but now, at least in part, there are some remnants. Hopefully this will yield some real treasures.

Three planes later, and with not much sleep, I was back in Lyon to wrap up my European jaunts for the year. Over the course of two weeks, we presented the six numbered Tchaikovsky symphonies, two of them at each concert. When we did this in Detroit, it was spread out over three weeks, and each symphony was paired with a concerto. In many ways, the French project was a bit tougher and certainly more demanding on the orchestra.

We had decided to pair one of the popular symphonies with a lesser performed one, so there was a balance to each concert. Numbers 1 and 4 made an attractive start, with the contrasts and growth of the composer quite in evidence. The ONL threw themselves into this, playing with incredible commitment and energy throughout. I took a chance in the Scherzo of the Fourth and only conducted the beginning and a couple tempo transitions. Other than that, I just left them alone to fend for themselves. The artistic director said that they did not think I should get paid for that movement.

What should have been the shortest program of the series turned into the longest. With the Second and Fifth symphonies paired up, we should have been out of the Auditorium in about an hour and 45 minutes. However, our alarm system started making a metronomic clicking sound in the hall, quite audible to everyone. We had to wait 25 minutes before someone came around to fix it. In the meantime, I went out and spoke to the audience about Tchaikovsky and the pieces they might eventually hear.

That was not the only complication of the week. There was a strike by the theater technicians of one facility in the city, causing their colleagues in other venues to stop working in sympathy. This began just after our first day of rehearsals for the series. That night, the Borodin Quartet was to play a concert, but there was no one around to move the chairs or adjust the lights. Everything was left just as it was when the orchestra finished its rehearsal. And that meant that the next morning, even with the strike continuing, all we had to do was show up and the stage was exactly as it had been the day before.

None of us knew if our concerts would take place. Somehow, either a settlement was reached or our own people decided to break ranks. The shows went on. I still do not know if the strike has continued.

There was also a “concert participatif,” something we have done for the past three years. Audience members are invited to bring their instruments into the hall and play along with the ONL. They apply online, get a ticket and are sent music for what we will play. The ONL demonstrates a few passages, I have the public try to imitate them, and then we all do this together. Age ranges seem to be from about seven years old to 70. It is an amazing event! A great reminder of what music means to so many people, whether or not they enter the profession. And it is always great to see at least one person bring an accordion.

Another event involving a somewhat different audience took place the night after the performances of the Second and Fifth. This one was for students, mostly high school and college. These concerts are always packed to the gills, and the crowd is about as enthusiastic as one ever gets to see and hear. When the orchestra makes its entrance, it is as if Beyoncé and co. have come on to the stage. The program is just over an hour, and we played the Fifth Symphony with the Polonaise from Eugene Onegin as the opener.

Prior to the start of the concert, an elaborate lottery system was put in place. The winner had the opportunity to conduct the orchestra in an encore of a minute of Onegin. So we finished the symphony, the young lady was introduced, and I gave her and the audience some instruction on how to conduct (see my Conducting School). She said she had absolutely no musical experience, causing me to tell everyone that this made her ideally equipped to be a conductor. I had to help a bit, but the audience loved it.

Then, on the spot, I decided to have the entire public lead the same music. After having them rise from their seats, I reminded them of how to do the basic three pattern, counted off the first bar, and suddenly, the ONL had 2,500 conductors! It was an amazing sight, and I thought the Auditorium would come tumbling down with the thunderous clamor that followed. It was quite an experience.

Last up were the Third and Sixth symphonies. The former was receiving its first performances in Lyon. We worked very intently on both works, honing details in the “Pathétique” and making sure that the orchestra learned all the music well for the “Polish.” This all paid off handsomely and turned out to be one of the most inspiring concerts I have had the pleasure to lead with the ONL.

There was also a tinge of sadness to the occasion, as our general manager, as well as our public relations director, were attending their final concerts with me as music director. They are both headed to Paris and will be sorely missed in Lyon. Without them, it would not have been possible to accomplish as much as we did. Attendance has increased 30%, tours are in place, and the orchestra is sounding great. This cannot be done by the music director alone. Hopefully, when replacements are identified, they will continue to build on what now exists, but for the moment, Jean-Marc Bador and Denis Bretin will move on, and we must find new paths. 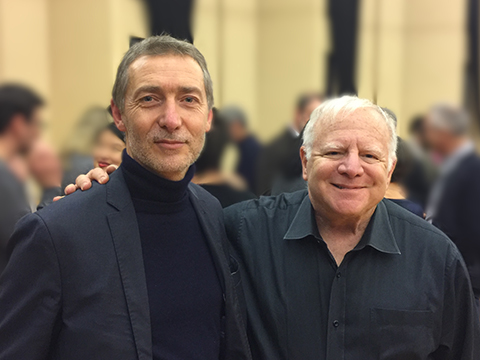 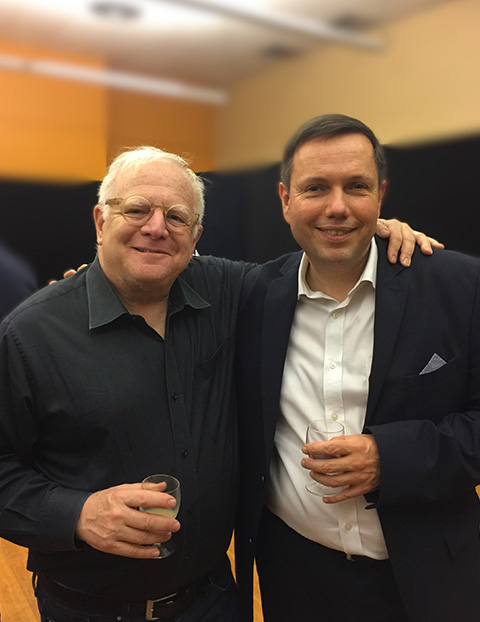 It was also Thanksgiving. Finding a restaurant serving the traditional fare wasn’t easy, but Franklin’s Steakhouse turned out to be very satisfying. Some interesting takes on the usual, including a butternut squash soup with foie gras. But the pumpkin-white chocolate cheesecake stole the show.

The following night, Jennifer Gilbert, one of our concertmasters, held sway at her flat, with all the family around. This included brother Alan and about seven children. Great stories and merriment ensued, and it was very nice to have the feeling of good friends to celebrate what is, in my mind, our best holiday.

Since we are in the festive spirit, here are my three picks from arrangements done by my dad, originally released on an album called Season’s Greetings. Sadly, none of these have ever been reissued on CD, but usually there are some generous souls who post individual tracks online.

“Joy to the World”

Cindy and I wish you all the very best for the holidays.

See you next year,