It is somewhat unusual for me to be making a debut with an orchestra these days. With a limited guest-conducting schedule, due to running two orchestras, I have to be a bit more selective about where I will be guesting. So it was surprising to many that I spent a week in La Coruña with the Galician Symphony Orchestra.

This part of Spain is in the northwest and has a population of only a quarter million people. You would think that only a provincial band would be located there, but in reality, it boasts one of the best orchestras in the country. It did not hurt that I have a particular passion for Spanish food and wine. It also helped that my good friend, Michel Camilo, was the soloist.

The program was among the oddest I have ever led. A couple of people in the industry compile what they believe to be the worst concepts for concerts. On paper, mine might qualify. The surprise was that it worked well.

The repertoire: Overture to Candide, two works for piano and orchestra by Gershwin, and the Shostakovich 11th Symphony. The only connection I could even remotely make with these pieces was that they each spoke in a unique vernacular. Other than that, it seemed as if they had no business together. Michel wanted to play the “I Got Rhythm” Variations and the Rhapsody in Blue. The management wanted the Shostakovich, and that was that.

The orchestra comprises musicians from all over the world, with many Americans scattered about the different sections. Perhaps because of the multinational nature of the ensemble, discipline was high on their agenda. No interruptions due to talking or extraneous noises. The solo playing had distinction, and the strings made a fine sound throughout.

There were opportunities to see some of the city and sample the cuisine. Known primarily for its seafood, La Coruña also offers some of the finest beef available. And of course, this is the area for Albarinho, the delicious white wine of the region. Overall, it turned out to be a lovely trip to a part of the world I might not have visited.

The return to Detroit continued the Spanish connection. A few years ago, a friend was in Weimar and heard a concert that featured the premiere of Cyborg by Ferran Cruxient. He is a young composer from the Barcelona area, and his piece was very warmly received at the first performance. I took a look and decided to present it in Detroit. Unfortunately, this turned out to be one of the casualties of the strike, and the American premiere did not occur until this year.

It was worth the wait. At about 22 minutes, this extremely well orchestrated and appropriately paced piece is not your usual concert opener. The composer employs the orchestra in ingenious ways, including having them download an mp3 file to their cell phones and play it back near the end of the piece, an element that did not strike anyone as gimmicky at all. I look forward to performing more of Cruxient’s music.

The piece was partially inspired by a stroke suffered by his father. It was the marvel of today’s technology that spared his life, and Cyborg tries to show the commonality of humanity and mechanics. The wonderful irony of this is that neither the composer nor his father was in Detroit for the performance. They watched and listened via the DSO webcast. Cyborg in cyberspace.

The other news from this concert was the American debut of Alexandra Soumm. This young Russian-French violinist created a sensation with her performance of the Sibelius concerto. I heard her at an audition two years ago in Lyon and immediately engaged her for these performances. She studied with one of the concertmasters of the ONL. It was a pleasure to introduce her to the States, and we will be working together again this summer.

To close out a substantial program, we performed the 4th Symphony by Gustav Mahler. I suppose that this symphony, along with the 1st, is the best introduction to this composer’s music. After many years of conducting the work, I have come to a slightly more subjective view of the piece rather than an overtly passionate one. Mahler is very careful in his instructions and his outlining of the structural details, and much of this can be lost with excessive rubato. In particular, the slow movement, which is basically a set of variations, can come off as episodic unless tempos are well judged and connections are made.

Of course, many disagree. Part of the Mahler ethic lies in exaggeration, but for me, this is the one piece in which clarity and simplicity must reign. The orchestra responded beautifully and our concertmaster, Yoonshin Song, played the devil’s fiddle solos with proper menace. The soprano soloist was Ilana Davidson, who brought the appropriate childlike innocence to the young person’s vision of heaven. I am not so sure that sauerkraut and asparagus are exactly what I would want if I were to arrive there, but that is what the text tells us.

Also during this week, an album of music by Cindy made its appearance. Recorded over a two-year span, it features four of her orchestral works and shows her in many different compositional guises. The disc came out very well, and we are all proud of Cindy for these wonderful pieces. Also released this month is the second volume of music by Ravel as performed by the ONL. This one features an incredible orchestration of Gaspard de la nuit made by Marius Constant.

It was back to Lyon for an important rededication of the Auditorium’s organ. The instrument was built in 1878 for the Trocadero in Paris. Almost 100 years later it was shipped to Lyon. Over the past six months the building has been closed and the organ restored. Now it has 82 stops and more than 6,000 pipes. The sound is amazing!

Repertoire over a nine-day period included the obligatory Saint-Saens 3rd Symphony as well as a rarity by this composer. Written right at the end of World War I, Cypres et Lauriere is a piece that expresses loss as well as triumph. Perhaps not a major score but certainly of more than curious interest.

The Belgian composer Joseph Jongen was represented with his most popular work, the Symphonie Concertante. This was a staple of the recording industry when Hi-Fi came into the marketplace. Today, the score sounds a bit dated, and although the material is interesting, the development is stodgy, at least to my taste.

We also gave one performance of the Poulenc Organ Concerto, which is certainly a masterpiece. Typical of the composer, the work is at once sarcastic, parodistic and elegant. I have always loved this piece, and having the opportunity to do it with one of the great French organs was an honor.

The sole performance of Holst’s Planets turned out to be the real surprise for me. Not quite as popular in France as in other parts of the world, it still drew a sizable crowd. The orchestra dispatched the piece with absolutely no problem at all, comparing more than favorably with their English counterparts. The offstage women of the Britten Choir were superb and on pitch throughout.

The last of the two legs of this trip took Cindy and me to Poland. It was to celebrate the 80th birthday of Krzysztof Penderecki, whom Cindy had studied with both in Krakow and at Yale. Over the course of one week, 52 of his compositions were performed. Imagine if this ever happened for an American composer! 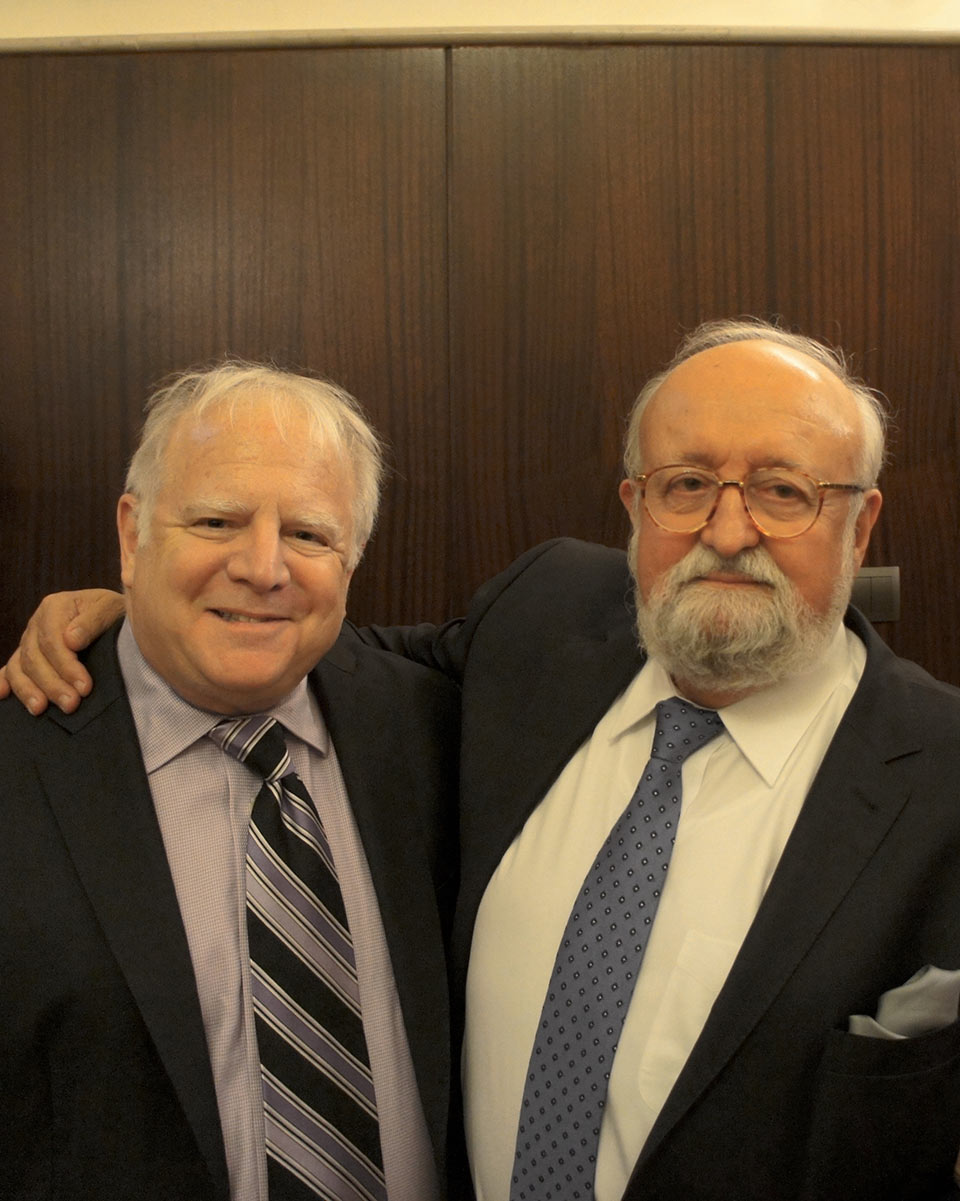 The first stop was in Katowice, home of the Polish Radio Symphony Orchestra. This was the ensemble that I would be working with, leading two pieces. Since we arrived in the evening and I had two rehearsals before flying off to Warsaw the next day, there was no opportunity to visit or sightsee. Not that there was that much of interest, as this is a city whose livelihood has depended on coal mining. The orchestra is excellent, and the good news is that they will get a new concert hall next season.

We began with the Horn Concerto, a relatively recent piece reflecting the composer’s conservative side. The soloist was Radovan Vlatkovic, the outstanding Croatian. The other piece was the much earlier De natura sonoris No. 2. This work is more of the style audiences in the States know, reminiscent of the Threnody for the Victims of Hiroshima. Music like this requires a somewhat different conducting technique, as there are no time signatures, just indications as to how much time passes between different events. It takes a bit more explaining to the orchestra than usual, but the orchestra caught on quickly.

The short flight to Warsaw brought something unexpected upon arrival. At the baggage claim area, on opposite walls, were two huge displays, one celebrating Penderecki’s 80th and the other honoring Lutoslawski’s 100th. Imagine if this ever happened for two American composers at home!

Most of the musicians at this festival have long associations with the composer. Although I have conducted his music, we had never met. That would change at breakfast. Cindy of course knew everyone in the family, as she also served as an English teacher for Penderecki’s children. She had also been here five years ago for the composer’s 75th. It was wonderful to see Cindy enjoying her connections with him and the family.

I asked Penderecki if he realized how difficult his early music was to conduct. He said that was the reason he himself began to take the podium. Then he told me something that changed the way I would do the early piece.

“Do not take the time span in each measure literally. Instead of counting the seconds a passage takes, just use your instincts as to what comes next.”

This opened up a world of possibilities for me. I was able to feel free and at the performance, it almost felt as if I had partially written the piece. The Horn Concerto flowed nicely, and I felt that Cindy could be proud.

There were some old friends around as well, including Charles Dutoit, Anne Sophie Mutter, Valery Gergiev and Julian Rachlin, among many. The true hero of the event was the composer’s wife, Elzbieta. She organized the whole festival and kept everyone on their toes. She also gave speeches at virtually every event. The presidents of Poland and Croatia were in attendance.

We were also able to take in some other performances, and I was quite taken with the Sinfonietta No. 3 as well as the Kaddisch. All in all, it was a fabulous few days, filled with great music making and great conversations.

Then it was time to get back home for a big world premiere.