Santa Fe Opera’s production of Barber’s Vanessa has garnered rave reviews, with critics lauding the top-notch cast, the elegant and evocative design elements, and Barber’s rich, colorful score. As John Stege of the Santa Fe Reporter opined, “Vanessa’s a tight-knit ensemble opera, the sort of thing that SFO usually knocks out of the park, which is exactly what happened last Saturday night.” 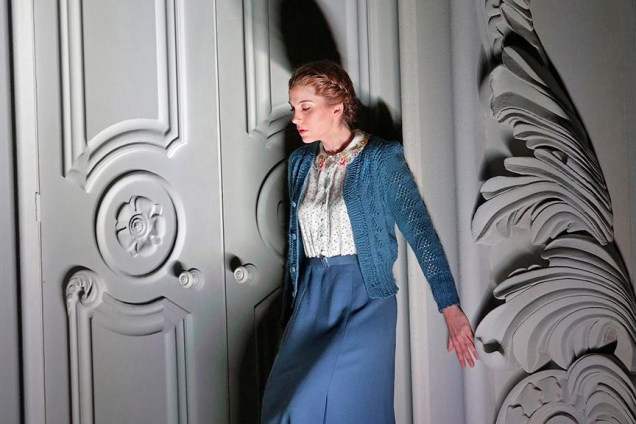 “Taking a look back at 2016’s repertory—slightly unconventional though it be—I’d rank [Vanessa] among the most successful of several summers past. … For conducting honors, Leonard Slatkin ranks high. He’s especially noted for his definitive 2004 recording of Vanessa and now for its penetrating reprise [in Santa Fe].”

“Coolly Elegant Vanessa in the Desert”

“Conductor Leonard Slatkin seemed to revel in every bit of nuance in this splendid Neo-Romantic score, from the entrancing harmonies to the soaring melodies to the crackling through-composed dialogue that erupted into pungent arias. The eloquent orchestra responded with a generous outpouring of musical excellence underpinned by dramatic intent. Maestro Slatkin partnered his exceptional cast with unerring unity of purpose, and constantly shifting emotions were accommodated with consummate artistry, nowhere more so than in that shattering final quintet.”

“[Slatkin] seemed to have the perfect skill set to successfully guide SFO’s superb production of Vanessa, helping to make this 2016 offering one of the highlights of the company’s current season.”

“The 2016 Festival Season at the Santa Fe Opera Review”

“Leonard Slatkin conducted with a clinical precision that reached its zenith in the dark disappointment of their final quintet.”

“Leonard Slatkin, a conductor with deep experience in Barber’s musical language, gets dramatic and nicely detailed playing from the orchestra.”

“Returning to SFO after an absence of six seasons, American conductor Leonard Slatkin gave a well-paced and expert reading of the score. All in all, a most worthwhile addition to the SFO repertory.”

“Veteran conductor Leonard Slatkin conducts the work with a particular confidence (having recorded it). … The Act 3 instrumental intermezzo is the musical highlight of the evening.”

“Not only is Barber’s orchestral writing par excellence, and delivered superbly by Maestro Leonard Slatkin, but it is loaded with magnificent production values. The costumes, sets and lighting present a glorious environment for the top drawer singers to deliver to us a grand night at the opera.”

“Conductor Leonard Slatkin did a fine job shaping this score, which alternates between thickly orchestrated and more vacant sections. He was on top of the text all the way. He also modulated the sound so that the orchestra never covered, or even challenged, the lyric voices in the cast. The orchestra responded to him with some excellent playing.”

“Barber was a highly successful concert composer, and the orchestral score for Vanessa, his first opera, is symphonic in sweep and range, sometimes in ways unconnected to the libretto. In Slatkin’s hands, it became the real star of the show: precise, with a dark and visceral power all its own.”

“Familiar from his definitive 2004 recording of the opera, Leonard Slatkin leads his principals, large orchestra and chorus with surpassing skill and minute attention to Barber’s sweeping score.”

“Conductor Leonard Slatkin gave the Santa Fe audience a rapturous reading of Barber’s score and the orchestra played with the full measure of its virtuosity.”

“Leonard Slatkin led a polished rendition of this most beautiful score [Barber’s Vanessa].”

“Leonard Slatkin conducted a secure and carefully colored performance. He extracted the best work I have heard this season from the company’s orchestra.”

“Conductor Leonard Slatkin gave the audience in Santa Fe a thrilling reading of Barber’s score. Vanessa is not often seen today. Slatkin and his cast definitely made a case for more performances. If you have the chance to see this opera somewhere, do not hesitate, just go!”

“Leonard Slatkin brought his great experience of the piece … and really inspired the Santa Fe Opera orchestra [to] highlight both the lyrical beauties and the complexities of Barber’s score.”

“Stepping Out with Slatkin & McTee” Kicks Off Placitas Artists Series