At the time, when I first announced that I would spend my summers away from the podium, no one believed me. How would it be possible for someone who has devoted his life to waving his arms to actually halt for nine weeks? Well, halfway into it, I can attest that it has not been difficult at all.

However, the first part of the rest period involved a surgical procedure, which went well but confined me to the house for a week and a half. What to do? There were a couple projects that I could take care of, one related to business and the other purely for pleasure. Let’s start with the latter.

It was my great honor to have known respected film critic Roger Ebert during the time when I was a regular guest conductor in Chicago, and reading him today remains a true delight. One time, he took me to his office at the Chicago Sun-Times and asked me if I wanted to see my obituary. This was at least 25 years ago, and I was horrified to learn that almost everyone is in a newspaper’s database with only the last parts of one’s life to be entered.

Whenever I was in town and there was a pre-screening, Roger would invite me, and sometimes we would view three films in one sitting. We saw great movies and lousy ones. His television partner, Gene Siskel, was there as well, and I loved talking films and music with both of them. They would often come to my concerts and opera performances.

One of Roger’s books concerns the 25 films he considered to be the finest examples of French cinema. I had decided several months ago to watch them, with only a couple already known to me. Down in my cave, where my audiovisual setup is located, I had the DVDs laid out in the order in which I wanted to watch them. There was not enough time to get through all 25, but a huge hole became smaller, all to my enrichment.

Breathless, Amélie, Au revoir les enfants, Jean de Florette, Manon of the Spring, Man on the Train, The Hairdresser’s Husband, La vie en rose, Mr. Hulot’s Holiday, Day for Night, Belle de jour, The Discreet Charm of the Bourgeoisie, and Jules and Jim got me through the recovery.

What revelations each brought. Whether the acting, directing, story, or photography, each could be seen as an influence on where cinema was going or at least how filmmaking was changed by the French. One of the great things today is being able to watch the various commentaries and explore the wealth of information available via the Net. Did you know that the “jump cut,” that moment in a movie when things seem to move quickly to another place in the same scene, came about by accident? It seems that Godard thought that Breathless was about 30 minutes too long, and rather than eliminate a scene, he just chopped off a few seconds here and there. Nowadays, this is a common, intentional practice, but the process was brand new in 1960.

The conclusion of my mini-festival will have to wait, as once my recovery was complete, there was an important task to accomplish.

Aside from conducting, writing books, lecturing and administering two orchestras, I have been doing more composing these days. Last season my little divertimento, Endgames, was premiered. This time I had a more personal piece in mind. It must be understood that all my music is written simply because I want to, and I have never accepted a commission or had a deadline in mind. In a couple cases, I have opted not to have the pieces performed, not because they were bad, but there was simply no place to put them in a program without it seeming self-serving.

I usually get an idea in my head, it stays there for a while, and if it hangs around long enough, I put it on paper. Such was the case with Kinah, the Hebrew word for elegy, a work that had been floating in my brain for about half a year. Once I started writing it out, the piece flowed quickly. My guess is that it was completed in about a week and a half. I wrote about half of it directly to score paper, and the rest was done on the computer. Cindy assisted by editing, asking questions, and making sure that the formatting was done correctly in order to extract parts. This entails making sure that page turns occur without incident, all chords are spelled clearly, and what is written is truly what I want. 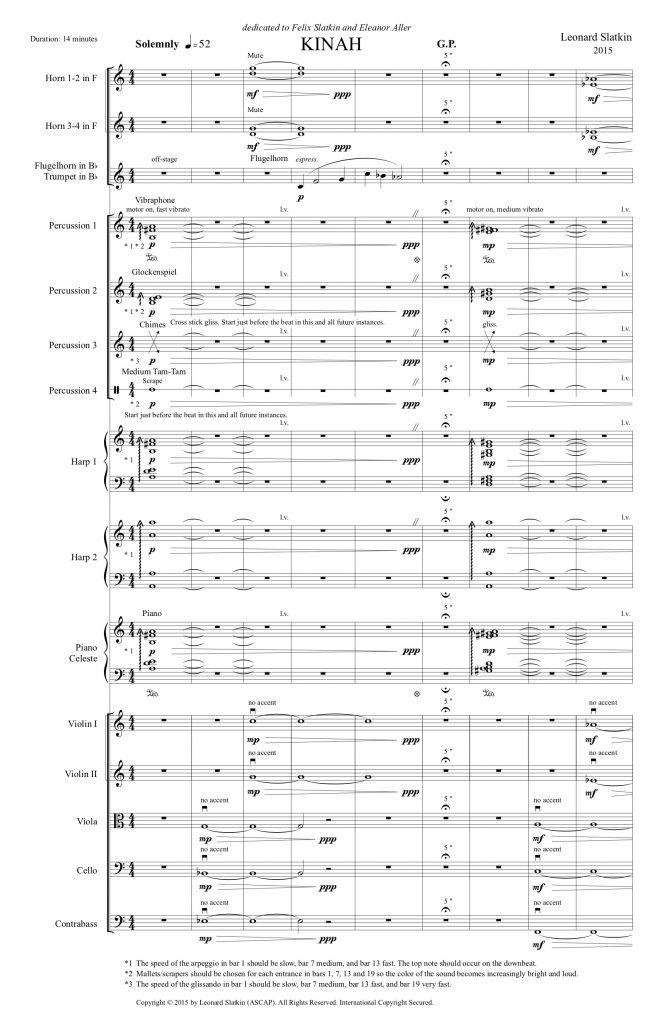 Here is a preview of the program note that will accompany the work and explain the story behind the piece. Keep in mind that the premiere will be in Detroit, a few days after what would have been my father’s 100th birthday. Also, this is not the final form of the note, as that is sitting on my desktop at home. Too many devices to keep track of.

On February 6th, 1963, my parents rehearsed the Brahms “Double” Concerto with the Glendale Symphony, located in a suburb of Los Angeles. It was to be the first time that my father, Felix, a violinist, and his wife, Eleanor, a cellist, would play this work in public. There was a great deal of anticipation for this performance, as the two were regarded as part of the elite of the Hollywood musical establishment.

I was 19 years old, not sure what I was going to do with the rest of my life as far as a career was concerned. Attending the rehearsal seemed a chore, but I saw that everyone there was mesmerized by the pair’s incredible way with this piece. We all knew that the concert would be an evening to treasure.

Alas, the performance never took place, as my dad died two nights later, at the age of 47. The respect he was shown was evident in the memorial service held two days later, when 1,500 people showed up to pay their respects, including Frank Sinatra. I really never had time to mourn, and so it seemed right for me to compose this brief elegy as a tribute to both my parents. My father would have turned 100 this December and my mom would have been 98.

Before heading off for the true vacation part of the summer, there were a few events for me to attend in Detroit. Two of my former students were conducting the orchestra in neighborhood concerts. Damon Gupton, who was part of the Conducting Institute in Washington, led programs at the Edsel and Eleanor Ford House in Grosse Pointe Shores. He is equally well known as an actor, appearing in television shows and the widely acclaimed film Whiplash. His banter with the audience showed him as a fine communicator, and his command of the music was clear from the first beat. Choosing between career paths will likely be his biggest challenge.

Andrés Cárdenes, who was for many years the concertmaster in Pittsburgh, was not really a true student of mine. As orchestra members occasionally do, he came to me every so often for advice about branching out into the conducting field. Andrés would bring in a score, we would go through the technical and musical traps, and then he would work on it with one of his student orchestras. The first piece he chose was the First Symphony of Barber, not necessarily the work I would start off with. Apparently it went well, and he has since left the orchestra to pursue a conducting career. His technique is outstanding, never overstated, and he got his intentions through to the orchestra very clearly.

Since I had the time on my hands, I also worked on my grilling and barbeque techniques. Being from LA, this would have seemed natural, but there is much to learn about controlling temperatures, especially when slow-roasting over coal. Over the course of seven days, I felt right at home with fish, vegetables, and meats, even venturing into smoking a brisket. More than likely, even more than the French films, this is the part I will miss most during the next several weeks away from home.

On the listening front, I found myself using drive time to reacquaint myself with Henry Mancini—not just the movie scores, but also several of the albums he did as an arranger. What a genius! Who else would use four bass flutes for anything? Having the top studio musicians help out did not hurt either. The only album I did not care for was the one where he took the tunes from Mr. Lucky and turned them into Latin charts. Still, it is hard to go wrong with pretty much anything from this complete musician.

Now it is on the road, first to Seattle to visit Cindy’s family, then on a 10-day Alaskan cruise, followed by a few days in San Fran and some time down the coast in Monterey, where Daniel will be with his girlfriend. Then it is over to Vegas to catch some shows and make up any shortfalls in the DSO’s budget, and finally to Rancho Santa Fe to visit some dear friends. Travel seems so much easier when I do not have to get off a plane and start conducting right away.