“Welcome to Busch Stadium. It is a beautiful day for a ball game with temperatures in the upper 70s and a few clouds helping to keep the crowd cool. The Cincinnati Reds come in for this first game of today’s double-header with the Cardinals sitting atop the National League Central division by two-and-a-half games …”

For the past two days, various cards, messages and gifts had been coming in, all in anticipation of my impending milestone marking three-quarters of a century on the planet. This was all leading up to the big day itself, but I found myself moved by the early heartfelt wishes of so many people. In particular, my friend, British journalist Colin Anderson, had posted a large number of well wishes from luminaries in and out of the music world that he had been collecting. I was touched beyond belief and was grateful for a life that had generated so many fond memories from people, some of whom I have barely known.

Everyone knows about my love of baseball and specifically the team here in St. Louis. There are four generations of Slatkins who have called this city home, and each has expressed a particular passion for Cardinal nation. With a rather severe storm having hit two days earlier, the team was forced to play consecutive back-to-back games two days in a row. This meant that the start time for the first match was moved up by an hour.

“Today is kids’ day at the park. Each child under the age of 12 receives a specially created set of pajamas and will have the chance to run the bases after the conclusion of the first game. We also have a special guest appearance by former St. Louis Symphony Music Director Leonard Slatkin, who will throw out one of the ceremonial first pitches prior to the game …”

75 is just a number. I had to keep reminding myself of that fact as the past few days went by. With a couple of heart surgeries behind me and a few other ailments alleviated due to replacement parts, I feel pretty good. Taking most of the summer off turned out to be exactly the right medicine to recharge the batteries and work on other projects. Finishing up my contributions to the set of Paganini Variations—the musical creation to honor my birthday, starting a piece for the 50th anniversary of the youth orchestra I founded here, working on a third book in collaboration with Robert Freeman, and recording a few more “Slatkin Shuffle” radio shows were the only work-related things on the agenda. The rest of the time was spent just hanging out, cooking and catching up on movies and TV shows.

“Slatkin has just been introduced to the crowd and makes his way to the mound. In a stunning surprise, he has elected to throw the pitch from the rubber rather than standing closer to home plate. That means that he fully expects to cover the 60 feet, six-inch distance with his legendary slider. Not bad for a 75-year-old who is usually just moving his arms up and down rather than forward. With his family looking on, he strides confidently to the middle of the infield …”

Daniel and Bridget had arrived a couple days earlier, and her parents the day before my birthday. We had all gone with our good friends Michael and Noémi Neidorff to Tony’s, the legendary restaurant in downtown St. Louis, and I was hopeful that the wines had not produced an aftereffect that would hamper that throw to the other kind of plate. The well wishes were continuing to pour in, and it was difficult not to check my phone during dinner to see who was writing.

Perhaps most of the authors were ones that I expected to pen something congratulatory, but the surprise was seeing how many people simply wrote to express appreciation for whatever I have contributed to society over all these years. There were names I did not remember or even know. Slightly more than 48 hours prior to the actual birthday, I was starting to feel overwhelmed by the sentiments conveyed by so many.

“Behind the plate is Cardinals relief pitcher Mike Mayers, ready to receive what is expected to be a blazing fastball from the left-hander on the mound. Slatkin is a rare kind of switch pitcher, in that he does some things with his right side and others with the left. And what is this? Cardinals mascot Fredbird is coming in to stand behind Mayers and serve as umpire for this most important throw. Having pecked Slatkin’s wife Cindy a bit earlier, who would have thought the beloved mascot for the team would actually risk being hit with a misplaced heater from the Maestro …”

Cindy had been plying me with little gifts, mostly related to the wine lover’s experience, but one of the presents was very special indeed. I still retain a number of vinyl recordings but no longer had a turntable on which to play them. This situation has now been remedied, and I will have the chance to once again listen to some recordings that have sat on the shelf, ignored, for many years. There is still something about the purity of those 12-inch discs that remains part of my history. Maybe it is all in the mind, but after putting on a couple records, I was cast back to a simpler time with the sounds of my past rekindling my affection for the good old days.

In some ways, I preferred the simplicity of this birthday. More than likely, there will be some celebrations with orchestras during this upcoming season, but the actual day itself really was about family and friends. 70 was on a grander scale for some reason, but probably the fact that I no longer have an administrative role to play makes this occasion a little easier to deal with.

“Rumor has it that Slatkin was practicing with his son in the driveway of the house, measuring off the distance but not taking into account the slope of the mound. We seem ready now. Still looking confident, Slatkin looks in for the sign from the catcher. Forgoing a windup, he is set, and throws the ball …” 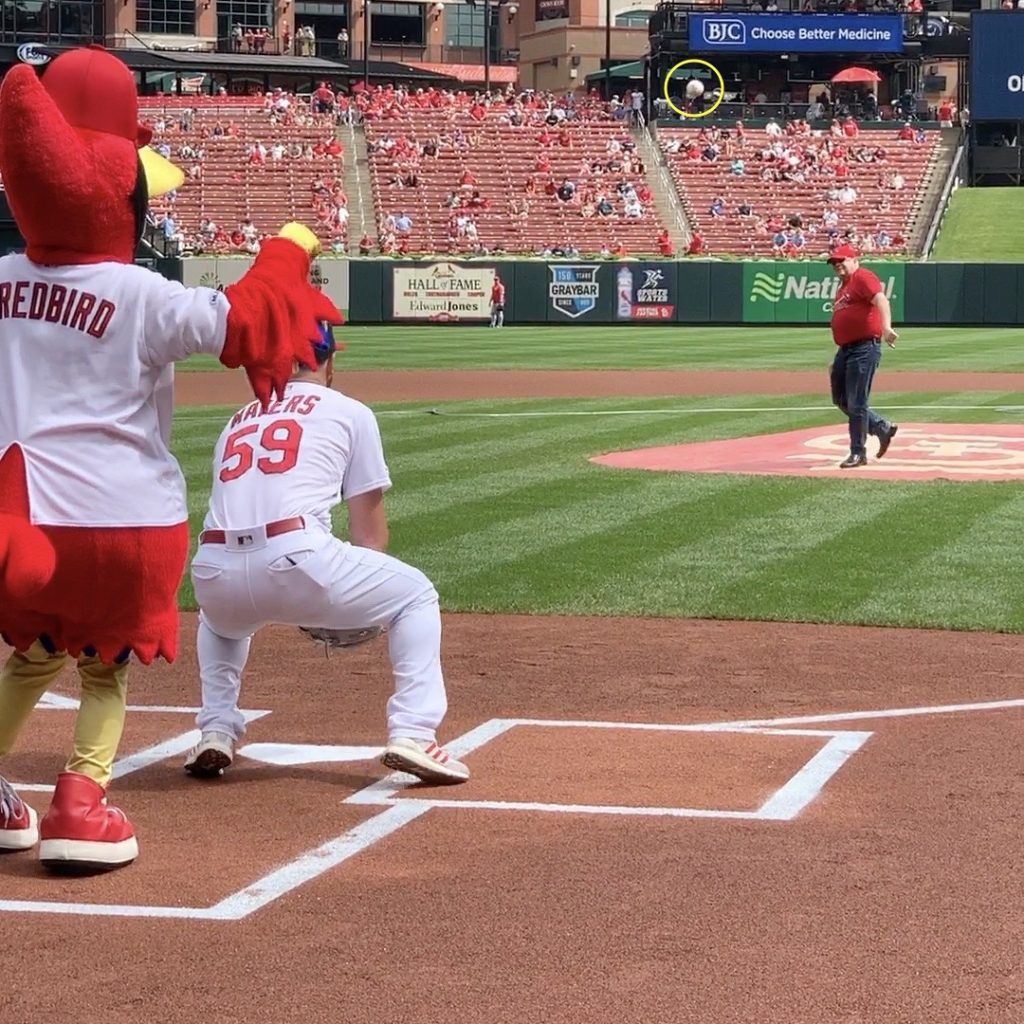 For all those reading this little blog, thank you so much for your well wishes. They mean far more than you can know. One small caveat for a few of you: I am not retiring. My conducting schedule remains active and will still encompass all parts of the musical world. With just 11 more days left until vacation is over, I am looking forward to resuming conducting activities with orchestras I know well and those that I am seeing for the first time.

If you happen to be at one of my concerts, do try and get backstage so I can meet you after the show. Putting faces to names is always fun, but please remind me of how you know me, as I tend to need some helpful hints these days. I will keep everyone apprised of activities as we move forward to the next big celebration—Spirit of ’76 and all that.

“It is a slider, right on target but a little short, hitting the plate and landing up right in Mayer’s glove. Had there been a batter, he most certainly would have been fooled by the pitch and struck out. The crowd goes crazy, but that might be more due to the fact that Slatkin did not unload into Fredbird. Messages are already coming in that the Cardinals need to sign up the conductor for the stretch run over the next four weeks. They are not saying what it is they expect him to do, but pitching is probably not one of the thoughts. Great to see him back at Busch, and we all wish him the best.”

The Redbirds went on to win the game in the bottom of the ninth in dramatic fashion. The family had a nice quiet dinner, followed by a very restful sleep. There are a lot of messages to answer, and I probably will have to do it in mass emails and apologize in advance. It was probably the nicest birthday I have ever had, and I thank each and every one of you for sticking with me and reading these monthly musings. We will get back to musical reportage at the end of this month.