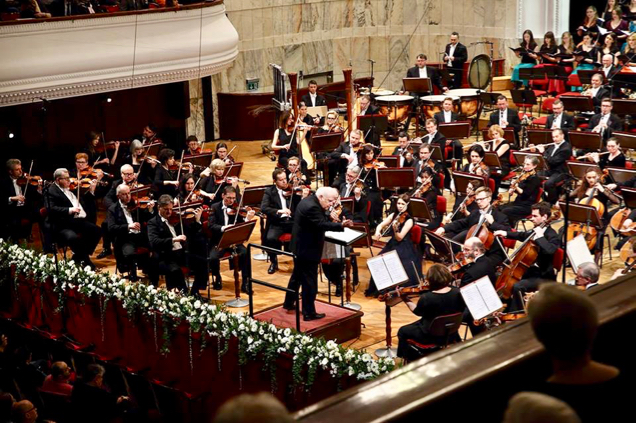 “Each gesture by Slatkin … testified to the deep involvement of the conductor in the text of the Second Symphony, ‘Resurrection’. Slatkin thought through the program of the concert from the first to the last note.”

“From the vision of death and the final judgment to the hymn of hope for resurrection, the Second Symphony under the baton of Leonard Slatkin was an unforgettable experience for listeners. … Although the Symphony ‘Resurrection’ is a work lasting over an hour, the attention of listeners did not diminish even for a moment. This is one of those performances that will remain forever in memory.”

“The evening of the American conductor Leonard Slatkin and the Katowice orchestra is an event that will go down in the history of the Beethoven Easter Festival. Rarely is there such agreement between musicians and conductors like that of the Polish National Radio Symphony Orchestra and Leonard Slatkin. Seldom are we listeners lucky enough to interact with the interpretation throughout and see it realized in every detail.”

“Those who do not like Mahler’s music claim that there are too many ideas and threads in his works. You can get such an impression when you are dealing with poor interpretations. Leonard Slatkin proved that every thought has a deep justification here. This is how a fascinating and consistent narrative was created, in which after a grim march, the listeners’ ears enjoyed lightness and finesse. Then there was a diabolical, ominous scherzo.”

“If someone would ask me for the indication of the ‘best’ [of the Beethoven Easter Festival], I would without hesitation choose Symphony No. 2, ‘Resurrection’, by Gustav Mahler. A double cast of the orchestra, brass section partly playing in the corridor, a large choir, organ, battery percussion, and all this performed by one of the best symphonic orchestras in the world under the baton of the American maestro Leonard Slatkin. The building of the Warsaw Philharmonic, filled to the brim, shook in its foundations, not only from Mahler’s monumental, fortissimo work, but also from the emotions of the audience, which applauded musicians for up to fifteen minutes with a standing ovation.”