The Detroit Symphony Orchestra’s latest release on the Naxos label is Aaron Copland’s iconic Symphony No. 3, recorded with the composer’s original coda intact. Reviews of the new recording have been overwhelmingly positive, with critics admiring Maestro Slatkin’s pacing, the orchestral balance, and the poignant, expressive playing of the DSO musicians. 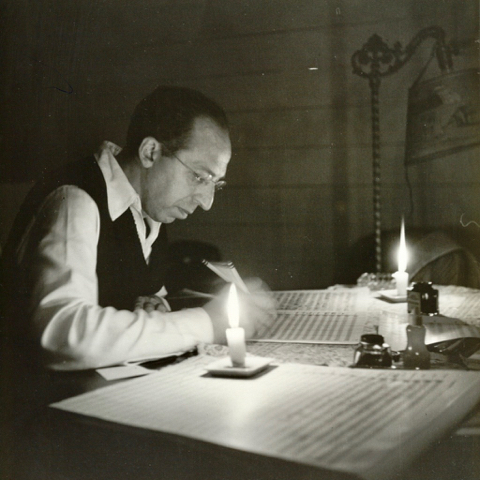 Copland working in his studio in the Berkshires, September 1946

“Slatkin’s rhythms are razor-sharp and spring-heeled, and he paces and phrases in a way that speaks of long familiarity with—and affection for—this iconic score. And it just gets better, the arc and spark of the second movement especially impressive. … Most important, the sheer chutzpah of this performance is audible in every bar. … Indeed, while some conductors grow dull with age, Slatkin just gets sharper; and that’s why more Copland from this source is such a pleasing prospect. A heady, hyper-bold account of Copland’s original score, superbly recorded; go for it.”

“[L]et me say at the outset, that having heard most of the previous releases of the Third Symphony, this stands out as the finest version on disc. [Slatkin’s] interpretation oozes Americana, the pulse and flow of the music so perfectly judged, and never can that feeling of thanksgiving and euphoria that gripped the States at the end of the Second World War have been so perfectly encapsulated. … I have never heard the Detroit [Symphony Orchestra] in such fine form, and maybe returning to the original Copland score injected a feeling that this was to be a landmark performance. … Whatever recording you already have this one will supersede it.”

“Slatkin has approached this project with a sense of completeness that is likely to appeal to those wishing to take a thorough approach to the Copland canon. … [T]he significance of Slatkin’s new recording is that he has restored the material that Bernstein chose to cut. … Indeed, there is so much heart-on-sleeve tub-thumping in the “social agenda” behind this music that, while the coda may strike some as silly, it still stands as evidence that Copland had skills in working with multi-voice counterpoint that he did not exercise very often. Bernstein may have imposed his cuts on rhetorical grounds; but, where nuts-and-bolts technique is concerned, those cuts take a particularly informative light away from Copland himself.”

“[O]ne of the greatest pieces of all American symphonic music, by any assay, performed by an orchestra and conductor of ideal sympathy.”

“Here it is, after nearly seven decades: the first official commercial recording of Copland’s Third Symphony in its first edition. … Slatkin’s new recording … is in a league of its own. The smaller Detroit string section is used to huge advantage, yielding an almost chamber-music intimacy and greater expressiveness, particularly in the first and third movement. The wind and brass playing is characterful, crisp, and, like the string playing, poignant and illustrative.”

“[T]his is in every respect a terrific performance, excitingly played and conducted, powerfully recorded, and with a nice bonus in the form of the Three Latin American Sketches.”

Leonard Slatkin's Conducting School, Lesson Ten: Getting On and Off the Stage

DSO Heads to Asia after a Free Send-Off Concert Sunday