OCTOBER 2020: Recovery Edition, A Side Trip

OCTOBER 2020: Recovery Edition, A Side Trip

Whatever happened to the calm before the storm?

As I write this, we are about a week away from the election, or as I prefer to call it, “Waiting for the Seventh Trumpet.” Any diversion of attention is welcome during this time, and some charming events took place this past weekend. Not that any of them were accomplished in a traditional way, but they certainly put the political contest out of mind for a brief while.

From my time in high school right to this day, my interest in the people, history, and culture of France has always been in sight. Poor Mrs. Bordman—she attempted to teach us eleventh graders the basics of the language. We explored the ins and outs of verbs and tried to figure out why some nouns were masculine and others feminine. (I always thought that a person sitting at the Académie Française just tossed a coin when a new word came into the dictionary.)

We students pretended to listen attentively, but when called upon to answer a question, we replied with “je ne sais pas.” It was the first phrase we learned, and I used it often. My classmates were equally inept when it came to the linguistic juggling that took place. Mrs. Bordman finally had enough. She stomped her foot down and declared, “You are all like pieces of wood, just sitting there, doing nothing.” The fact that she said it in English made a strong impact, as our teacher had been adamant that we only speak French for the whole semester.

Somehow, I managed to pass and get an acceptable grade. Believing that my life as a Francophile would never come to be, I nonetheless found myself in the presence of another instructor from that part of the world. At Juilliard, Jean Morel had become the preeminent teacher of conducting, the person that all fledglings aspired to learn from. He was strict, disciplined, and rarely complimentary. After four years of study, the best I ever got was, “Slatkeen. Eet was not bad.”

But we sure learned the repertoire of Morel’s homeland, not just the well-known works, but also music by composers that have been forgotten, even by the French. He taught us about Gabriel Pierné, Jean Roger-Ducasse, Henri Rabaud, and so many more, sometimes just casually dropping their names into the lessons, making our trek into the library more of a hunt. What diamonds could we find in the rough?

As my European career began to take shape, I would spend time in France, but only two cities: Paris and Lyon. I made annual visits to the capital and visited the second city a few times as well. Surprisingly, the world of Mrs. Bordman came back in a good way, and I remembered enough to get through almost every situation.

Several months ago, I was asked by the Federation of Alliances Françaises USA if I would be available to accept an award at their annual convention. The Prix Charbonnier recognizes those whose vocation or avocation promotes French language and culture. Honorees have included Julia Child, Pierre Cardin, and Jacques Pépin. My first reaction to learning that I was this year’s recipient was one of humility as so many others fit this bill, and of course I was also immensely honored.

Every year since its inception in 1991, the award has been presented at the organization’s annual meeting. In 2020, this was supposed to occur in Detroit. Of course, that plan went by the wayside, and instead, the conclave took place virtually. It turns out that Zoom is spelled the same way in French, but I do not know if it is masculine or feminine. Maybe it is a verb. Cindy can figure it out and conjugate as needed.

The French Ambassador to the United States, Philippe Etienne, was on hand to present the award and speak about the Alliance’s significance. The trophy had been sent to me a couple days earlier, and I could proudly hold it up to the camera for all to see. Jean-Yves Thibaudet made a surprise appearance from his Los Angeles home. After a few words, he played a lovely rendition of the Ravel Pavane. 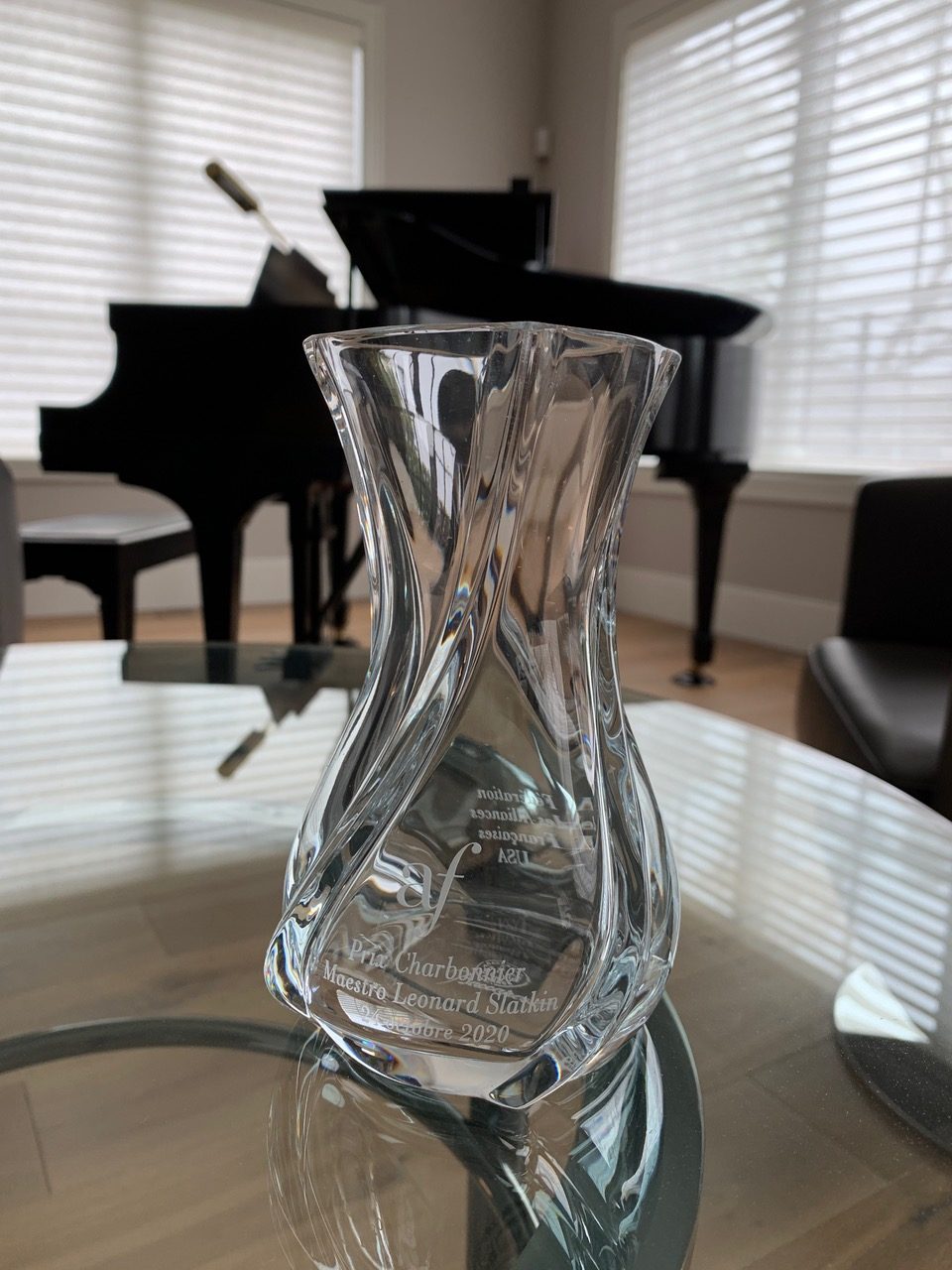 It is not my habit to use a template for most of the things I say. I usually wait until the moment is at hand, try to judge whom I am speaking to, and then just expostulate on whatever comes to mind. However, for this occasion, I realized that since several recipients have been chefs, perhaps these thoughts might be appropriate to weave into my acceptance remarks: To me, French music is about taste and smell. When you hear the Romantic yearnings of Berlioz, the gossamer fabric of Debussy and Ravel, even the sinews of Boulez, you experience something palpable that goes beyond just listening. It can only be described as French—the perfumes and aromas exciting the senses in ways that the music of no other nationality can.

Earlier that same day, the Gallic theme had already begun. Among the few orchestras that have tried to perform live as a group is the St. Louis Symphony. After several months apart, many of the orchestra members returned to Powell Hall over the past two weeks. Their music director, Stéphane Denève, was beginning his second season with the orchestra. After pulling a few strings, he entered the States, leading the group in two sets of concerts.

Only one-hundred-or-so members of the audience were permitted into the building, each wearing a mask. Like so many of his colleagues, Mr. Denève was precluded from performing with full forces, so the orchestra was reduced to about thirty players. As much as I would have liked to have attended, being indoors with others does not feel comfortable yet. This is amplified by an alarming increase in cases of COVID across the country.

Stéphane and I chatted on Zoom for about an hour, talking about many things. He and his wife had contracted the disease in the spring, but their daughter did not become infected, surprisingly and gratefully. His residence is in Brussels, and Belgium is also seeing considerable spikes in numbers. Given the difficulties of international travel at this time, I certainly hoped that he would get home safely after this trip.

Conductors tend not to speak to each other. The reason is simple: We are very rarely in the same city at the same time. Of course, this should not make any difference with the technology available to bring us together remotely. Why did I wait to speak with him until he came to St. Louis when it makes no difference where you are? Perhaps many of us are just not used to this new way of communicating. Somehow, speaking is changed when the visual component is added. Dick Tracy did not take this into account when he had his two-way wrist radio on.

The orchestra here is in good hands. Monsieur Denève’s demeanor is firm but warm, and his mind and heart are dedicated to this position. He also has an exquisite sense of humor.

As I have done with a few other conductors who do not hail from these shores, I sent him a list of American works that he might consider, both for full forces and smaller ensembles. Given his expansive knowledge of what is going on in this country, all I did was suggest some ingredients to add to his own mixture, which conveniently gets me back to the kitchen.

One of the pleasures of spending so much time at home has been the opportunity to try things that I would not have ordinarily thought about, especially in terms of the food that Cindy and I eat. My own diet has changed a bit since I have moved into my seventies. Still, there are times that one must allow the luxury of an indulgence to creep in.

Thinking back to the award, and something that I mentioned in my remarks, my cooking skills have moved forward a bit. In particular, although I am hardly a master, coq au vin and boeuf bourguignon are now firmly in my repertoire. I am not ready for a soufflé quite yet, but perhaps I can give îles flottantes a try. All of these could be preceded by escargot, but Cindy will not allow me to gather the snails from the backyard.