With both Detroit and Lyon up and running, October was the first month of high-intensity music making on a large scale. With the strains of the Rosenkavalier Suite still in my head, I shifted my focus to Strauss’s earlier opera, Salome, for what would be an amazing evening of drama.

The month before, the ONL had made the decision to cancel the second of two Salome performances, as advance ticket sales had not been particularly strong. Although our subscription base has increased substantially, anyone can trade out their ticket for a different concert. And the new model, allowing subscribers to decide later whether or not to go to a performance, has made attendance figures less predictable.

Fortunately, the cast was amenable to the revised schedule, and we plunged ahead. The score was new for the orchestra, but after a read-through conducted by my assistant, Antoine Glatard, I took the ensemble through the work. Why did I opt not to conduct the first session? Well, these days I do try to consider my health. My arrival in Lyon was in the early afternoon, and after a transatlantic flight and another connection, it simply is not possible for me to jump into an evening rehearsal with the required level of concentration. In the future, there will be no conflicts of this kind, as I will not accept any situation in which I cannot properly recover from jetlag.

Salome is an opera I have done both staged and in concert. It works very well either way. This is because there is relatively little in the way of activity. Of course, everyone waits to see the Dance of the Seven Veils, or John the Baptist’s head, but these moments of shock are very few. I have come to attribute Strauss’s operatic success to the fact that he began his compositional career primarily in the world of abstract concert music. In other words, especially in the tone poems, he already knew how to make the music tell the story. For me, Salome is an orchestral work that happens to have voices in it.

And what voices we had in Lyon. Lise Lindstrom was the titular character. Her ability to cut through the massive textures of orchestral thunder was astonishing. We had never worked together, but after what amounted to a sitzprobe, with very little stopping, she and I had established a musical rapport that was palpable to all.

James Rutherford was the bass who lost his head. It is always tricky to figure out where Jochanaan should be placed when he is incarcerated in the cistern to achieve the desired difference in sound. At the Auditorium, we found an ideal spot where no amplification or reverberation needed to be added. His robust voice was just perfect.

The two other main characters were played by singers with whom I have done the work before. Donald Litaker was Herod, and Jane Henschel was his shrewish wife. Both have the roles down pat yet seem as if they are inhabiting their parts anew. The entire dysfunctional family was on display, and after the hour and forty minutes, the audience roared its approval.

With six days off due to the cancellation of the second Salome performance, Cindy and I decided to take a little trip to Istanbul. It turned out to be an amazing adventure with one terrible incident occurring on our first day in Turkey. The bombing in Ankara left everyone tense, but there were no indications that there would be trouble in our part of the country.

I had been to Istanbul three times before on different orchestra tours. There was never much time to sightsee, but I had taken in the cistern and the bazaar. This trip gave us four days to really get to know the city. From the Hagia Sophia, to the bustling spice market, to the small neighborhoods, the trip was spectacular. We were given recommendations for various restaurants as well as a fantastic tour guide. This was arranged by Kareem George, who, until a few months ago, used to work for the DSO. He now runs Culture Traveler, a boutique luxury travel service, and everything he suggested was spot on.

Of course the great difference in cultural life was to be expected. But I was surprised to learn how open the population is when it comes to expressing their opinions. Turkey is going through turbulent times. All you have to do is look at a map, and it is clear from its geographical position that the country is ripe for strife. By the time you read this, there will have been an election. We can only hope that this is not another opportunity for upheaval but rather a chance to move the society in a positive direction.

Here are a few of the sights we beheld: 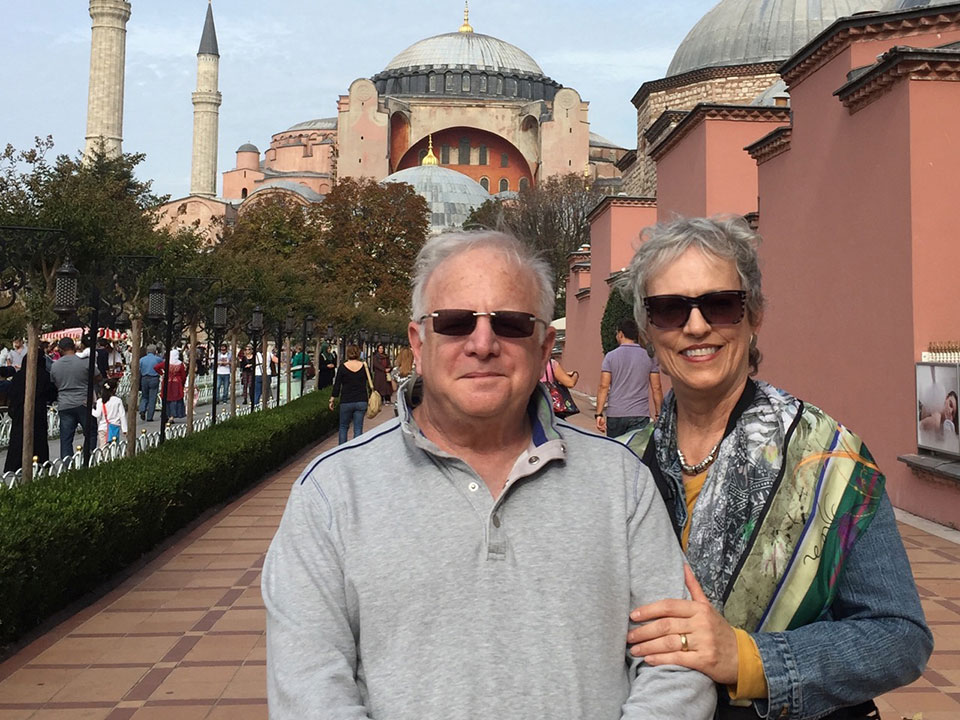 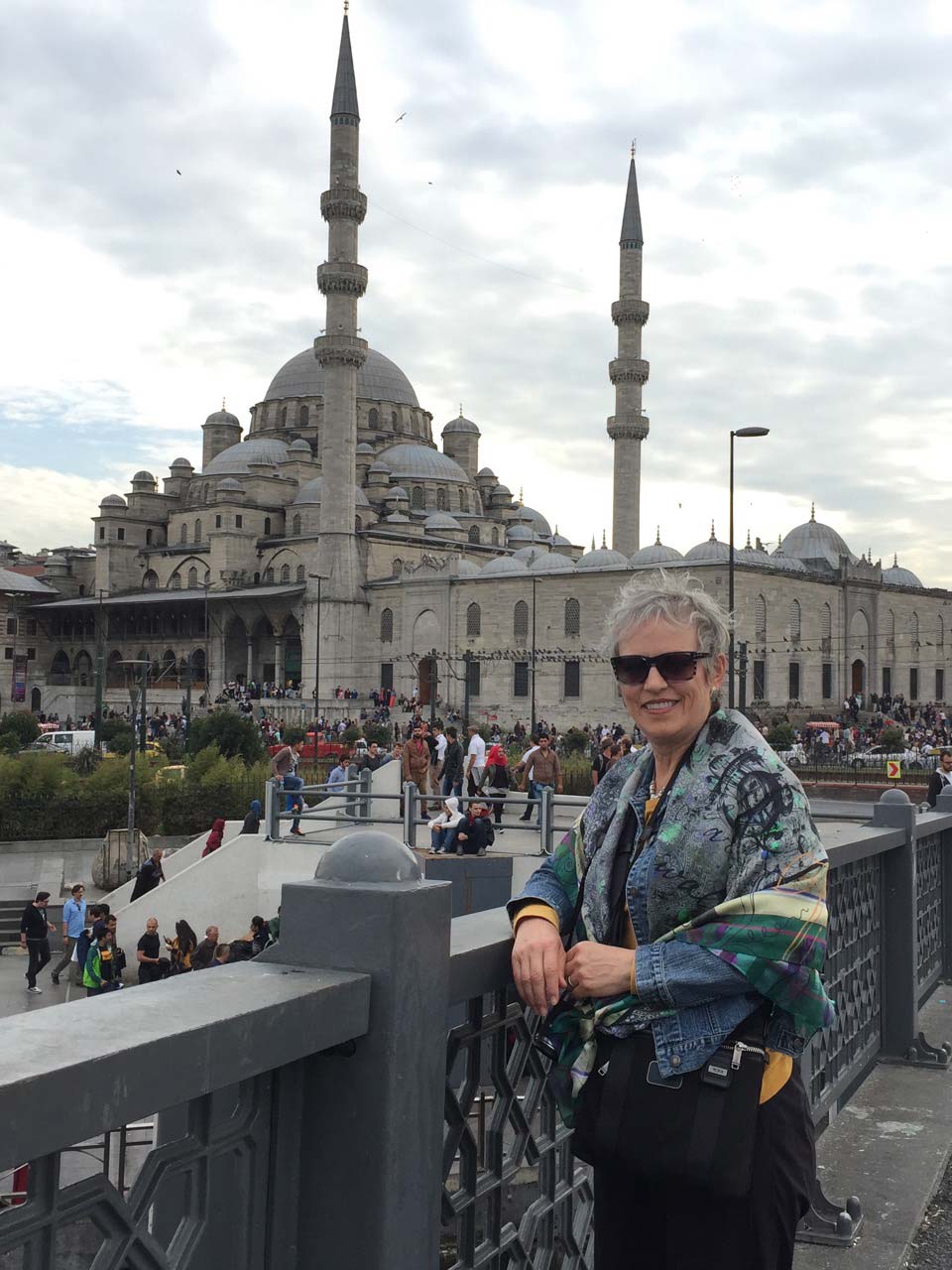 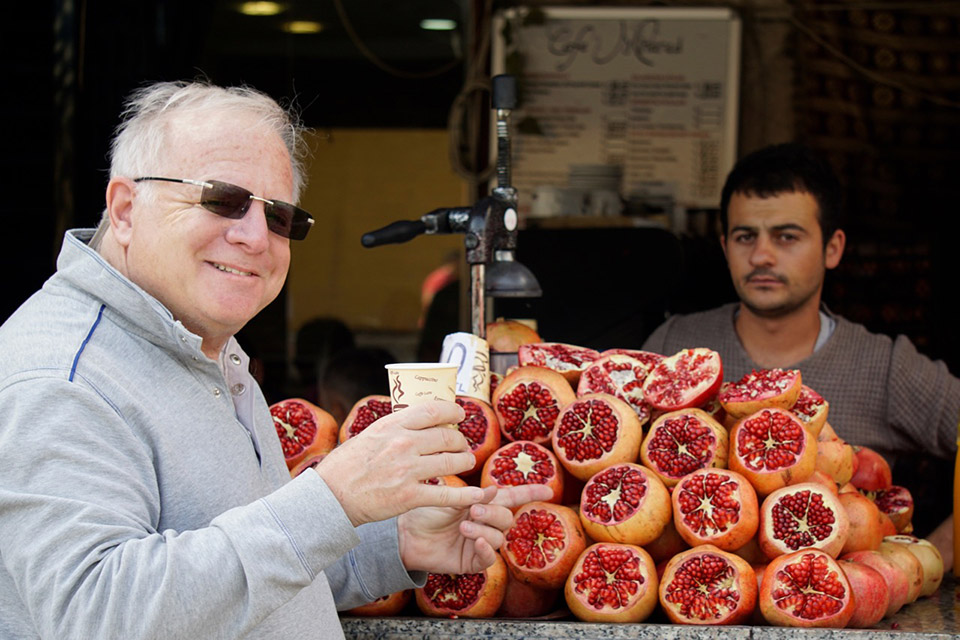 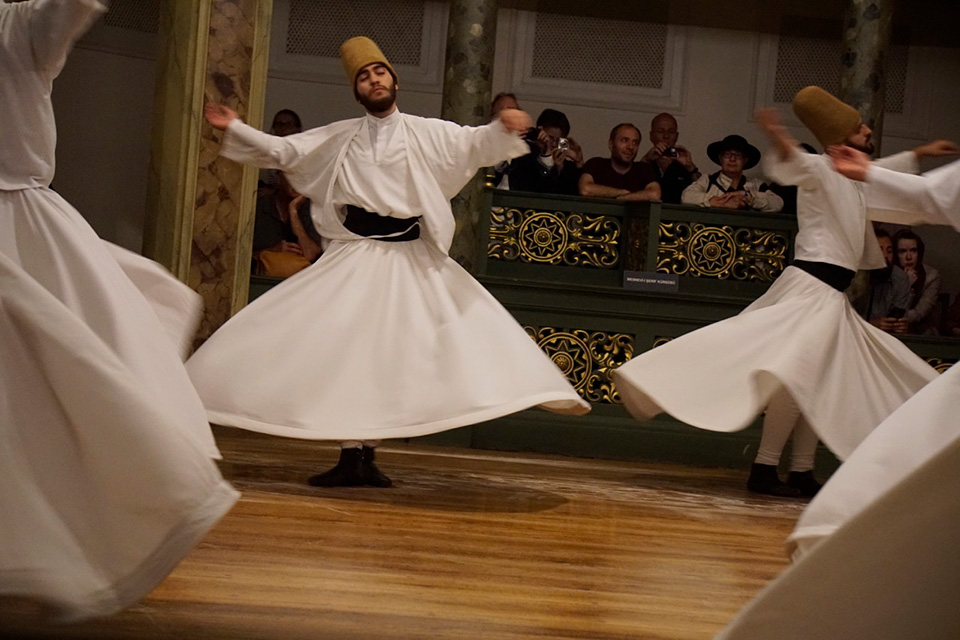 We returned to Lyon with a less stressful program than the previous Salome. That does not mean it was less interesting. For the first time in my life, I conducted a program devoted to Saint-Saëns. One of our calling cards, the “Organ” Symphony, was on the program, as well as two short pieces to start the concert. Marche héroïque and Danse Macabre were great fun to put together, and one was reminded of the composer’s skill and craftsmanship at all times.

But what truly was worthy of attention was the appearance of our soloist. His name is Daniel Lozakovitj, a violinist who is 14 years old. He came to us through the ONL artistic advisor, Christian Thompson, who also takes care of the Academy in Verbier. This is where he first encountered the young man. The repertoire consisted of two pieces, both of which were staples of the concert halls in earlier times, but today one of them has fallen by the wayside. The Havanaise and Introduction and Rondo Capriccioso are not the usual debut pieces anymore, but they proved a fine pairing for this most gifted instrumentalist.

I hesitate to judge, or speculate about his development, but right now Daniel has the gift to become an important figure in the musical world. Poised, humorous, and very bright, he impressed not only the audience but the musicians of the ONL as well. In attendance were heads of three major record labels, a sign that fame and fortune may be on the horizon for this young man. But thinking back on some of the other young artists I worked with in their formative years, I hope Daniel’s manager toes the line and does not expose him to the limelight too soon. The young man must learn patience as well as the ability to say “no.”

This week was also the one in which the annual film festival took place. Remember that Lyon is the birthplace of cinema. Although my schedule did not permit me the opportunity to take in any of the events, I did have a chance to chat with Martin Scorsese at a dinner that followed his lifetime achievement award. 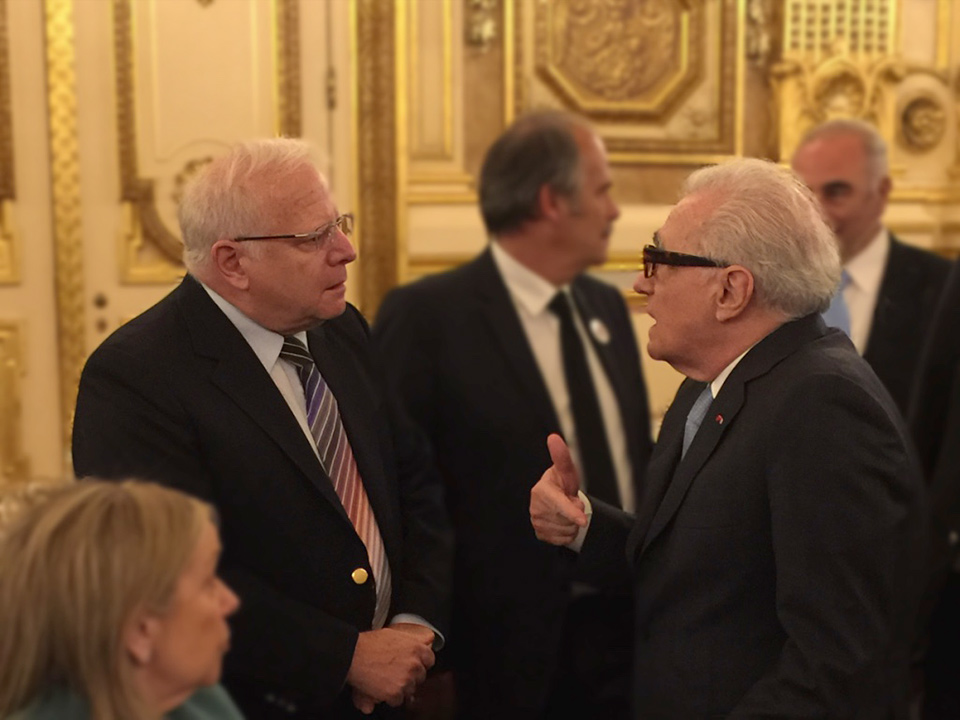 Back in Detroit, we also had a busy and demanding program. It began with Eine Kleine Nachtmusik, a piece that usually just gets a run-through at the final rehearsal. We spent quite a bit of time cleaning it up and getting the right balance of lightness and humor. After that, we had the American premiere of Nico Muhly’s Viola Concerto. Nico is one of the hot commodities in the composer market these days. His longtime collaborator Nadia Sirota was the soloist, and she was very much up to the task of cutting through what was, at times, some quite dense orchestration. The audience took to the piece, and it was very nice to get to know these two artists. The work was recorded for future release.

Also being recorded was Copland’s Third Symphony. Some of you may be aware that I have been performing the original version, with about 10 additional measures that were excised by Leonard Bernstein. Copland spoke about his misgivings, and since I have always had the first published edition of the score, I have always known about the cuts. Now a new edition of the symphony has been published with all the material reinstated, including a few other alterations from the more recent versions.

The work remains one of the most important American scores, but of course, I feel that way about numerous works. Still, there is something special about this symphony, and I found myself comparing it to the Shostakovich 5th in many respects. The performance was everything I had hoped for, and I look forward to the recording’s release on the Naxos label.

The last stop of the month was Pittsburgh. My association with this orchestra goes back at least 35 years, and they have always been one of my favorite ensembles with which to make music. I was a bit taken aback when they accepted my suggestion to do the Sinfonia Domestica by Strauss, as I assumed that Austrian-born music director Manfred Honeck would hold onto the piece for himself. But, as with a surprising number of conductors, he chooses not to do it. This work requires that the conductor be wholly comfortable with not only the music, but also the program that is behind the notes. I took a few moments to talk to the audience, showing which motives go with which members of the Strauss household. This makes it a bit easier, and dare I say fun, to follow the antics of the family. Of course, the Pittsburghers played it magnificently.

The soloist for the concert was pianist Conrad Tao. He was also featured as the composer of the opening work, Pángu, a splashy overture. The Gershwin Concerto was his vehicle at the keyboard. He played with panache, but as I tell almost every pianist I perform this piece with, it is almost obligatory to watch several Fred Astaire films to understand the elegant style and very discreet rubati required to make this work similar to the traditional piano concerto. Conrad took some of the ideas to heart, and the performances were excellent.

This past month, I listened to lots of Gil Evans. Most people remember him for his collaborations with Miles Davis, but I chose to go with albums that were done without the legendary trumpeter. Out of the Cool was a seminal recording that I remember owning back in 1960. It still sounds fresh, and Evans’s ability to move freely with his harmonic voice remains a benchmark. His collaboration with the singer Helen Merrill shows him in a more traditional vein, but still with his trademark individual stylings.

I was surprised by a couple of albums where he seems just as adventurous as Stan Kenton, allowing his soloists to freely improvise, almost avoiding what the other musicians are doing at the same time. Overall, I was very happy to rediscover this genius and recommend that you do the same.

There will be a lot of shuttling back and forth between Detroit and Lyon during this month, with some very interesting projects in both cities. Stay tuned.