It is that time of year again. No, I am not speaking of the complex season of concerts, but rather the baseball playoffs.

And I am potentially in big trouble this time.

As I am writing, Cindy and I are about to take off for Lyon. The Cardinals and Giants are starting game six of their series, with the winner going to the World Series. Whichever team triumphs, they will be facing the Detroit Tigers for the ring. People have been asking whom I will root for if this takes place. Being out of the country won’t help, as the Internet knows no borders. I wish there was some way that both could win.

There was much to be done on the music front, so a lot of baseball viewing had to be eliminated. I began my fifth and final year as Principal Guest Conductor of the Pittsburgh Symphony with a set of concerts at the beginning of the month. The centerpiece of the program was the William Schuman 3rd Symphony. This was only the second time the orchestra had ever played the work. I continue to be struck with the sheer inventiveness of this piece. Counterpoint has pretty much disappeared from much orchestral writing these days, and the Schuman is loaded with contrasting melodic lines. In some ways, this is almost a Concerto for Orchestra, with solistic turns and spotlights on different sections. The orchestra dug into the piece with great energy and spirit.

There was a novelty to open. Arlington Sons, by Scott Eyerly. Baritone David Pittsinger commissioned the work. The text concerns a visit to the cemetery by a father and his son. What made this extraordinary was that the performance was by David and his son Richard, 13 years old. They were terrific and the piece made a most favorable impression on everyone.

Olga Kern brought her magic to the Rachmaninoff Third Concerto. I was pleased to introduce her to Pittsburgh audiences two years ago and very happy that she returned with me in her signature piece. These days she actually has her own piano and technician. This cannot be inexpensive but I have to say that the Yamaha she plays on sounds wonderful.

On a night off, former President Bill Clinton gave a speech at Heinz Hall. His commanding presence continues to amaze. I had a chance to chat with him earlier in the evening and while reminiscing about our meetings together in Washington he said, “We had some good times, didn’t we?” For sure Mr. President. Here are Cindy and I with the Chief. 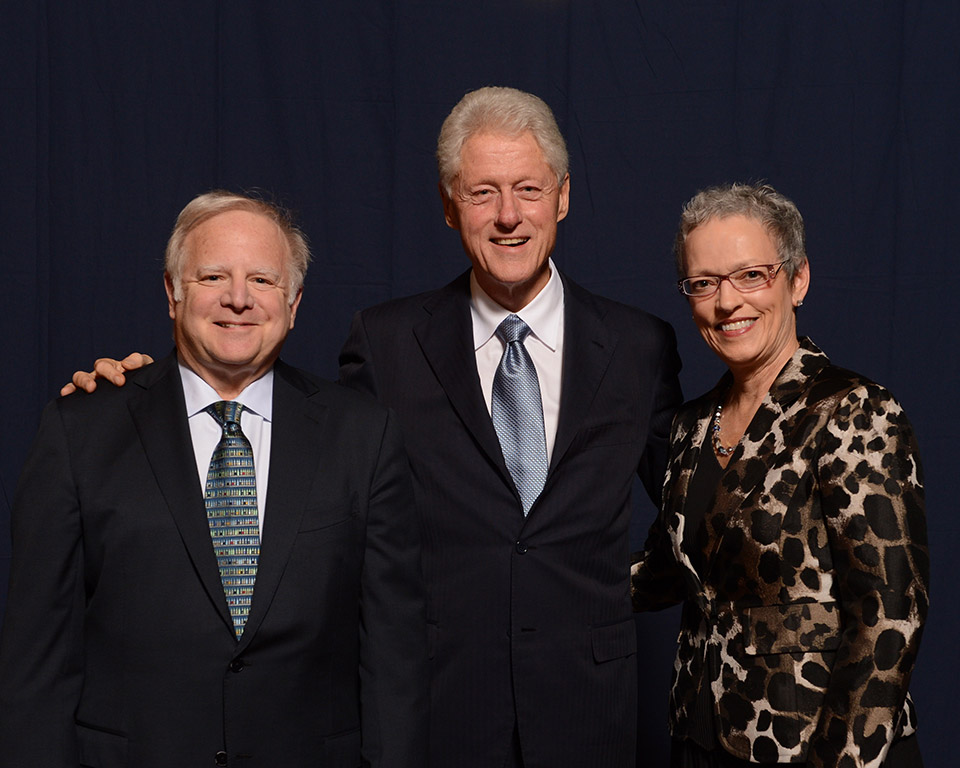 Next, it was back to Detroit for two weeks. This period was very intense as we have a number of recording projects going on. Finishing up the Rachmaninov Symphony cycle as well as starting one featuring the Copland ballets. There are six altogether. I have had some fun with friends asking them to come up with the names of all of them. Most people can’t. I trust my readers to far outshine the musicians who have scored a 5 out of 6 at best.

During the first week, we recorded Dance Panels, the last of the scores written for the choreographic stage. When it was written, I had the chance to get the premiere performances in the States, when I was music director of the Youth Symphony Orchestra of New York. Copland thought it was a good idea but his publisher did not. I had not had the occasion to conduct the work in the past, but these performances opened my eyes to a work by this master that I really did not know all that well. It combines some of the modernist touches of his later works with populist idioms familiar to most listeners.

We also recorded El Salon Mexico and Danzon Cubano, both pieces not heard so often these days. I remember when the former was a staple of the repertoire for almost every American orchestra. The rhythmic intricacies remain a challenge, mostly because the orchestration is so clear any mistake is heard immediately.

Gabriella Montero joined us for the Ravel G Major Concerto. She told me that she last played the work about 20 years ago, but you would not know it from her performance. Energetic and lyric when needed. Of course she included an improvisation on a theme suggested by audience members. The first one was “Take Me Out to the Ballgame,” as the Tigers had clinched a trip to the Championship Series. Gabriella responded with a Bach/Busoni like treatment of the song.

Bolero wrapped up the concert and it was a pleasure to have our new first flute, David Buck, play the pianissimo opening solo. Joe Becker, our new principal percussionist, delivered the extremes needed and held the tempo so well, I did not have to conduct very much.

We had an encore up our sleeve as well. Readers will remember that last season, we had to come up with a version of the Tigers fight song. Now we needed to play it once more. So “Go Get ‘Em, Tigers” reentered our repertoire. As it turned out, it worked this time around as the team advanced to the World Series just after these performances. We take full credit. I got to one game, where Justin Verlander shut down the Yankees.

An odd thing occurred that was not related to the music. My assistant placed an envelope on my desk that contained an autographed picture of my childhood sweetheart, Doris Day. Now mind you, I was only six or so at the time. You can read about this in my book. It became necessary to determine if this was for real, and I can assure you it actually did come from her.

The second week was an all-Rachmaninoff affair. Since we needed to record Isle of the Dead, and Olga was joining in for the 3rd Concerto, it made sense to complete the program with another work by the Russian master. I chose the Caprice Bohemian, an early piece written just before the disastrous premiere of his 1st Symphony. I always enjoy playing it and orchestras have a ball with the Rimsky-like take on variations. It surprises me that no one else seems to perform the piece.

The Isle is perhaps Rachmaninoff’s finest composition, along with the Paganini Rhapsody. The rolling 5/8 rhythm is unlike anything else he produced and by 1908, when it was written, the composer was at full command of the orchestral resource. Once again, the orchestra seemed right at home with the musical language involved. The homogeneous blend was sheer heaven, giving an almost organ like sonority to several of the passages.

Olga reprised the 3rd Concerto from the Pittsburgh week. The acoustics of the smaller venue in Detroit aided these performances. Not to detract from Heinz Hall, but I find that if there is a more compact space, it is easier to balance and go for certain expressive gestures. The audience roared its approval and Olga obliged with different encores each evening. At the final concert, we added, “Go Get ‘Em, Tigers” to the mix. Since we had a video presentation of this for our worldwide audience, we are passing it along to the team in the hopes that they will show it on the Jumbotron out in left field.

My book continues to do well and is getting nice notices from both professional critics and those having fun on the Internet. I did an interview with Charlie Rose that has also garnered some praise.

We are off to Europe for a couple weeks. Time to reconnect with the ONL.

Some people have asked me to comment on the current problems confronting various orchestras in the States. The only advice I can offer is something that President Clinton said in his speech in Pittsburgh. It is a wonderful expression and many would do well to heed these words.