JUNE 2018: Notes from the Heart, Part 4; An Incredible Moment, Suspended in Time

JUNE 2018: Notes from the Heart, Part 4; An Incredible Moment, Suspended in Time

There are times in life when your heartstrings are pulled so tightly that it is impossible to contain your emotion. When that occurs, you transition from one plane of existence into another dimension. Such was the case on June 23rd.

For the past eight years, the Detroit Symphony has paid homage to individual benefactors during its annual Heroes Gala. On the occasion of my ten-year anniversary at the helm of the orchestra, the board decided that I should now receive this honor, along with two wonderful souls, Harold and Penny Blumenstein. They have been among the strongest advocates for our educational initiatives and certainly deserved this recognition.

For the preceding few months, I was purposely left out of the loop about what musical presentations would take place. Gradually I learned of a couple items. Storm Large and Michel Camilo would be the soloists. Teddy Abrams, my former assistant conductor and now music director of the Louisville Orchestra, would lead the DSO. One of Cindy’s pieces, her beautiful arrangement of Shenandoah, would be performed.

Once I knew that I would not be on the podium for the final three weeks of subscription concerts due to triple bypass surgery, it was important for me to try and conduct something, just to show that I was doing well enough to have a short musical farewell with the orchestra, in this case, my dad’s arrangement of “Carmen’s Hoedown.” Other than the aforementioned items, I knew nothing about the remainder of the program.

There were some guests who flew in for this event, including my manager, Doug Sheldon. My good friends John and Barbara Cochran came in from D.C., and Daniel and his fiancée Bridget certainly had to be there. Little did I realize how significant their visit would be.

After a short opening piece, Teddy spoke to the audience. I was not allowed to look at the program book, so I had no idea what would come next. He congratulated the Blumensteins and then proceeded to tell everyone that the next piece was by Daniel Slatkin! I almost fell out of my chair in the balcony. To top it off, Daniel would also conduct it.

Daniel has only been in the composition world for a little more than two years, and I knew that his progress has been extraordinary during that short period of time. What I was not prepared for was the incredible beauty of his composition and his confidence on the podium. If he was nervous, it did not show. He said a few words, most memorably about his piece being truly from the heart. 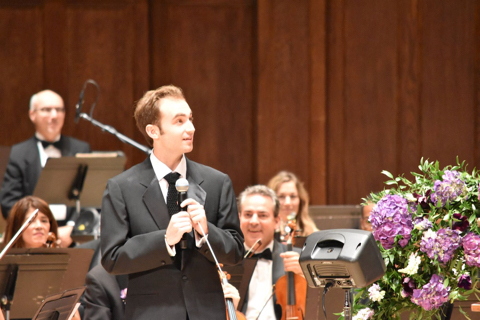 I was overwhelmed. My entire being became inhabited with a spirit I did not know existed. More than joy, more than pride and more than admiration, I experienced a new understanding of this young man’s talent and the sincerity on display. Tears were rolling down my cheeks as the work progressed. Audience members were likewise moved by the piece and its personal significance. How was it possible that someone so new to the world of composition could produce a piece so authentic and moving? I sat in stunned silence, listening and watching my son conduct his homage to me. Was this actually the same person whom I bathed in the kitchen sink?

I learned later that when the idea was presented to him, he jumped at the opportunity. I could only imagine the pressure he must have felt, especially in conducting. Most of his work in the film industry has involved musicians following click tracks, when a conductor is almost unnecessary. But there he was, standing in front of my orchestra, truly leading them. His technique was exquisite, and he handled the meter changes with ease. There was even an elegant cut off during the soft ending.

I watched and listened not just as a proud parent but as someone who had witnessed the passing of a torch. There is no question that Daniel has the goods and is the real deal. As with all people starting off in this highly competitive field, he will encounter a tough road ahead. But he has shown a maturity rare for his age, 24, and hopefully will feel his confidence bolstered from this experience.

William Wordsworth gave voice to my feelings. “What is pride? A rocket that emulates the stars.” Daniel opened up sets of emotions in me that went beyond the infinite reaches of outer space. This proud father was openly teary-eyed, as were many members of the audience. Even the orchestra seemed moved, not only by the gesture but also by his secure poise. I could only imagine what Daniel must have been going through. I can say without any prejudice that he has a gift to share with the world. But I cannot help but feel that he has also moved to a different plane in his life. The sky truly has no limits for him. Heartstrings will be moved, and all I can say at this point is, “I am proud beyond words, Daniel, and love you with all my heart.”

JUNE 2018: Notes from the Heart, Part 3; A Welcome Diversion