Originally, I had only planned to write once a month, summarizing activities that had occurred previously. But the first few weeks of September have had a couple of nice surprises that I felt were worth sharing early.

The recording industry has been in something of a downturn, but there are signs that the situation may be improving. I certainly cannot complain. During the 80’s and early 90’s, my own discography usually saw 5 to 6 discs a year being issued. But recently, I have been quite active both in the recording studio and through archival material.

With Naxos records, we just completed taping the complete works of Leroy Anderson, a composer very dear to my heart. Here was a composer of what used to be described as “light music,” and who never failed to entertain, at the very least. With the centenary of his birth coming up in about a year, it seemed like a good idea to put his entire output onto disc. There will be five altogether, with the first due out in January and featuring his Piano Concerto, with Jeffrey Biegel as soloist.

But the main reason I am writing has to do with the discovery of several works that either have not been recorded before, or were new to me. Almost every orchestra and musician has been familiar with his “Christmas Festival.” But I had no idea that there were similar holiday works for various ensembles from the orchestra. There is one for the string section, one for brass and, most unusually, one for woodwind choir. This was a major discovery, as most pieces with this combination usually include French horns. But Anderson stayed with just woodwinds, utilizing several low clarinets, which effectively take the place of the horns. It is an amazing sound and the carols are extraordinarily beautiful. I hope that in addition to the planned mixture of Anderson works, we will issue the holiday fare as a separate disc. Every musician in the BBC Concert Orchestra said that this was a recording they would buy for every member of their family.

The other recording news has to do with an album that I made with the St. Louis Symphony, just before my departure as Music Director. After a number of changes in the structure of BMG, it was decided that they would drop many of its artists and orchestras. One of the casualties was an album comprised of Three Suites by Hungarian Composers. Bartók was represented by his Miraculous Mandarin, Kodály with Háry János. But the real curiosity is the marvelous Suite in F Sharp by Dohnányi. This is a real stunner, filled with virtuoso writing and gorgeous tunes. It has not had much representation on disc, or in the concert hall for that matter.

Due to the hard work of one of the SLSO musicians, the English horn player Marc Gordon, and the generosity of Michael Neidorff, the album will be issued in mid-October, coinciding with my week of guest conducting in St. Louis. At this point, I am not sure how the disc will be distributed, but we will keep you all apprised as the time gets closer.

In the meantime, here is what the cover looks like. 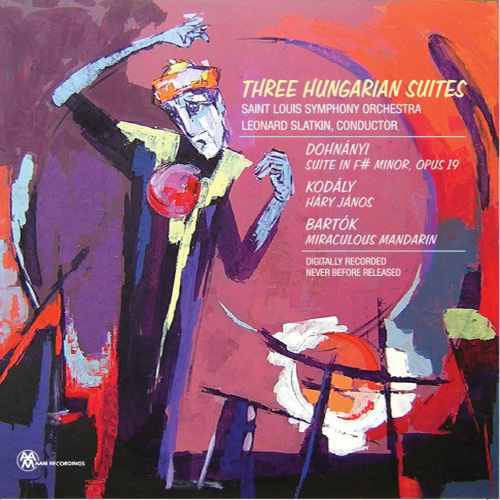 There will be more news in a couple of weeks as the various orchestras I work with either end their summer season, or begin the winter. See you then.