The end of a grueling, nine-week global schedule finished up with gusto and subtlety. We literally traveled around the world during these past two months, winding up in Tokyo for a most wonderful three-week stay.

Prior to that, there was much to do in Lyon. The two weeks spent there contained a number of concerts and events, including the announcement that I will be wrapping up my music director tenure with the ONL next season. After that, in a move similar to Detroit, I will stay on as music director honoraire, conducting several weeks each season. Altogether it will have been six years in Lyon, filled with great music-making, a very spirited orchestra, and the joy of having spent a great deal of time in one of the world’s best cities.

As has occurred a bit too often this season, we had yet another cancelation by a soloist. Daniil Trifonov was supposed to play Rachmaninoff 3 but informed us that an ear infection had kept him from flying. Rushing into the fray came South Korean pianist Seong-Jin Cho, winner of this year’s Chopin competition. At just 22, he had full command of the formerly daunting piece. It seems as if everyone can play it these days. Impetuous yet still full of emotion, Cho’s approach was very much that of a young man, but it is very clear that his talent is formidable.

For the final work of one of this year’s resident composers, we opened with Mason Bates’ recent Rise of Exotic Computing. Utilizing a pre-recorded synthesized track, the eight-minute piece bustled along in Mason’s individual language. The audience took to it very well, as they have with all of his works we have played during the past two seasons.

Surprisingly, I had not conducted Debussy’s Ibéria for at least 20 years. Turning back to this marvelous score, one that I had studied intensely when I was a student, proved revelatory for me. Whenever I revisit a piece that I have not performed in a long time, it really is like starting over. With Ibéria, the inner voices became clearer, and the overall structure seemed less chaotic than I remembered. The ONL has this music in their bones, so we all had a most enjoyable time.

The following week, we officially announced the ONL’s 2016-17 season to the public, and you can find my programs on the Schedule page of this website. We also performed a concert in which next season’s highlights were discussed and played.

The subscription program was quite unusual. Our other resident composer, Bruno Mantovani, had his recent Love Songs for flute and double orchestra presented. Juliette Hurel, principal flute of the Rotterdam Philharmonic, was the soloist. Although Mantovani’s style of writing is not usually one that I am comfortable with, there is no question that his ear for color and virtuosity is enormous.

One would not guess it at first glance, but the meaning of Montovani’s title has nothing to do with the piece itself, which is mostly aggressive and hardly lyrical. Bruno was actually acknowledging the “other” Mantovani, an arranger and conductor popular in the States in the ’50s. Very few in Lyon had ever heard of this man, but you can have a bit of fun listening to his “Cascading Strings” on YouTube.

Two Berlioz works opened the concert—his infrequently played Overture to King Lear and the “Queen Mab” Scherzo from Roméo et Juliette. The former is a bit long and repetitious, but we already hear the hallmarks that would make this composer so revolutionary: trombones coming in out of nowhere, unusual phrase groupings, and a prominent timpani part. The Shakespearean gem remains a model of refinement and finesse.

After the interval, we had a world premiere, of sorts. As part of our survey of the orchestral works of Ravel, we have performed a few of his pieces orchestrated by others. In this case, it was the G-Major Violin Sonata, now turned into a mini-concerto. Keeping the orchestra to roughly the size of Le tombeau de Couperin, orchestrator Yan Maresz has provided a lovely addition to the repertoire. With Renaud Capuçon taking the solo role, we were assured of a confident and knowledgeable account of the work. Wrapping it up was Ravel’s finger-busting Tzigane, brilliantly turned by Renaud.

The final Lyon event of the season for me was a “concert participatif,” a new tradition we started last season. Members of the audience go online, get a part of a piece for the instrument they wish to play, then come to the hall. We have a little rehearsal, and then they all join in with the ONL. This year it was the “Can-Can” and the final five minutes of Boléro. Everyone did a great job, especially the two people who brought in accordions for the occasion. I did miss the gentleman who, last year, arrived with an Alphorn.

Having been in China just two weeks prior to Lyon, it seemed strange to make the long trek overseas again, but this time it was for a nice stay in Tokyo. I have been conducting the NHK Symphony since 1983, and this was my eighth time with the orchestra. It would have been nine, but the previous trip was cancelled due to a health problem. If I add in the orchestras I have toured with, more than likely my total number of visits to Japan would be about 15.

The orchestra is now almost exclusively populated with Japanese musicians. When I first conducted them, they were importing players from Europe and America, as a great deal of the Western repertoire was still being introduced in this part of the world. The spirit of this orchestra is fabulous, and they can stand up to the very best.

Each of the three programs had some unique element as part of the repertoire. For the first set, I chose several Bach transcriptions, with conductors Barbirolli, Wood, Ormandy and Stokowski represented. Most of the musicians had never played these, and for some, it seemed anachronistic. But I love these pieces, as they formed a part of my musical childhood and to some degree, represented how I heard these organ and harpsichord pieces for the first time.

Prokofiev 5 has long been a staple of my own career, and I believe that it ranks among the top five in terms of pieces I have conducted the most often. The NHK forces threw everything they had into it, with amazing technical prowess as well as the dark, brooding sound necessary for this work. It was certainly a performance that rivaled the best I have ever done.

During this first week, the devastating earthquake hit the Kyushu region. There was not quite enough time to put together something appropriate for the initial set of concerts, but we made up for that during the next week. After an announcement, the orchestra and I made our way to the stage, and we played the Bach Air. Following this, there was a minute of silence, and then I quietly left the podium.

From that point, the rest of the program proceeded intact. The overture to Berlioz’s Béatrice et Bénédict made a nice, fresh start. This was followed by a work of Toru Takemitsu. There were all sorts of reasons for including Family Tree on the concert. In addition to Takemitsu being one of the most important and influential Japanese composers, it was also the 20th anniversary of his passing. I gave the world premiere of this piece with the New York Philharmonic in 1992. To my surprise, the score said that the narrator was the then-16-year-old Sarah Hicks, a fact that I had forgotten. She would go on to be one of my conducting students and is doing very well.

For these performances, obviously English would not do. So the text was transliterated for me to be able to follow along. There is no real coordination between narrator and orchestra, but it is important for the voice to come in at the right moments. 16-year-old actress Mayu Yamaguchi’s narration was touching, even if one did not understand a word of the Japanese. The piece showed what a master Takemitsu was at creating atmosphere.

Brahms Symphony No. 1 capped off the concert. After having performed this as part of the BrahmsFest in Detroit, I wondered if there would be a difference in my approach since this was not part of a cycle. Surprisingly, I found that there was even more forward energy this time, and I never once thought about the works that surrounded the creation of this masterpiece. Again, the performance was characterized by brilliant playing from the orchestra and a vociferous reception from the public.

The final week of this lengthy tour had what seemed a logical pairing: Bernstein and Mahler. But a few musicians in the States who had read about this program thought I had gone mad. The reason was that the works by the other Lenny were from his Broadway shows and not the symphonic canon. Mahler was represented by his simplicity in the Fourth Symphony.

With the Overture to Candide, the Three Dance Episodes from On the Town and the Symphonic Dances from West Side Story, there was a little bit of concern about how these musicians would handle the very idiomatic American style. Not to fear. They laid down everything really well, and the percussion section distinguished itself with real flair. I even encouraged the audience to shout “Mambo!” at the appropriate moment.

We had performed the Mahler together several years ago. For these concerts, there were actually two fewer rehearsals than the previous programs, so we had to work quite rapidly to put everything together. The soprano was Yoko Yasui, who brought a bright sound to the child’s voice, more in excitement of what heaven will be like rather than any hint of sadness.

It would not have been possible to be here for such a long trip without experiencing many of the cultural and dining experiences that abound. Kabuki and Noh were taken in by Cindy and me. There were trips to electronics stores in Akihabara as well as some isolated shopping in Ginza, Aoyama and Shibuya. I can never get enough sushi, teppanyaki, soba noodles or peach nectar. But the strangest event we experienced was something called “Robot Restaurant.” This is today’s culture at its most outlandish, with appearances by Godzilla, Taiko drummers, rappers, DJs and of course, robots. It takes place in a smallish space, and although four years ago was only known to the Japanese, it is now frequented by lots of tourists. 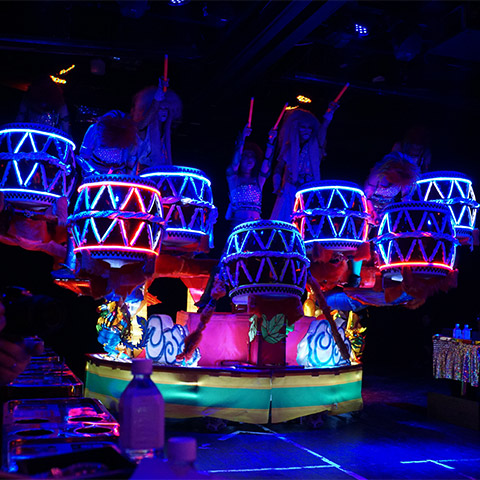 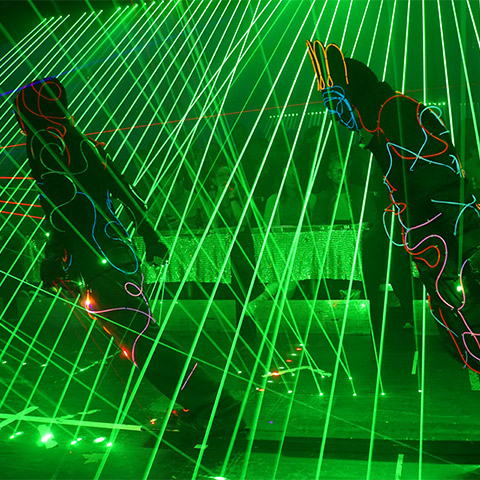 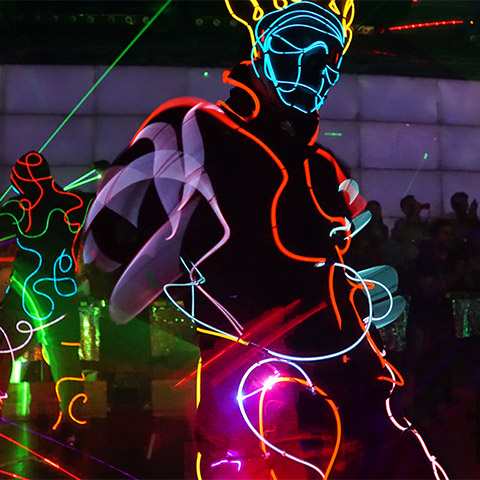 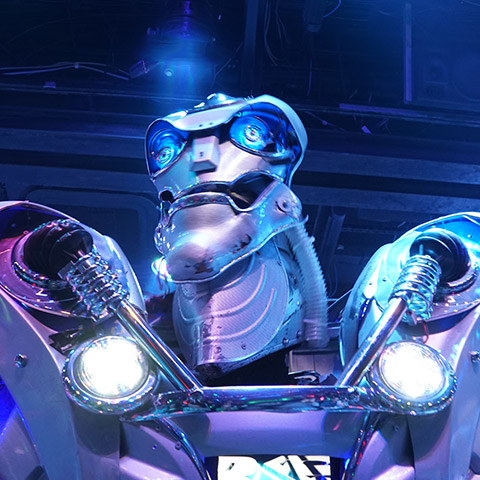 When we arrived in Tokyo, I checked out what was going on in concert activity and saw that Michel Camilo was in town. His gig was at the Blue Note, so we caught the first set of his last show. As with every venue he plays, the place was packed, and his legion of adoring fans in Japan is very strong. You never know who you are going to bump into, or where, in the musical world.

Here are a few of the sights Cindy captured during this wonderful spring in Japan. 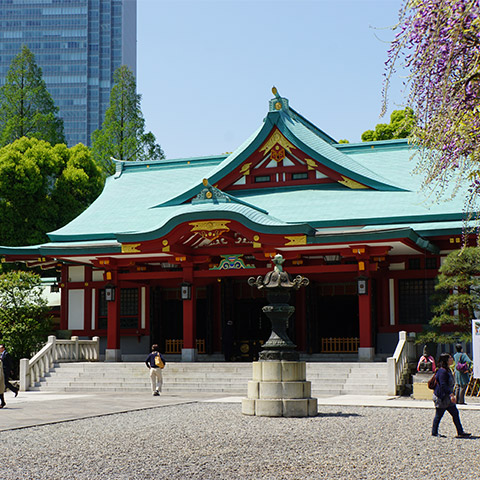 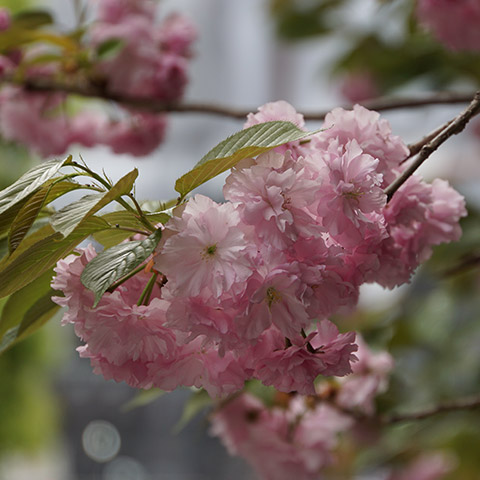 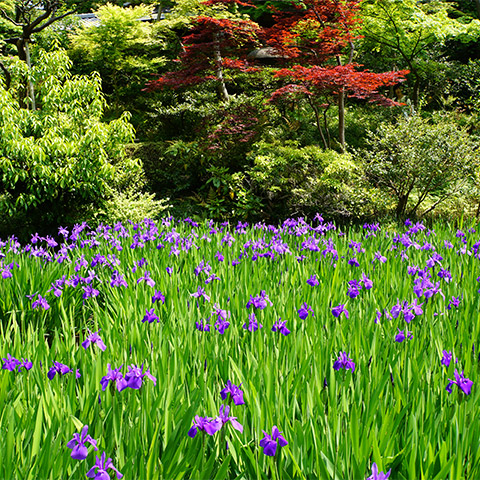 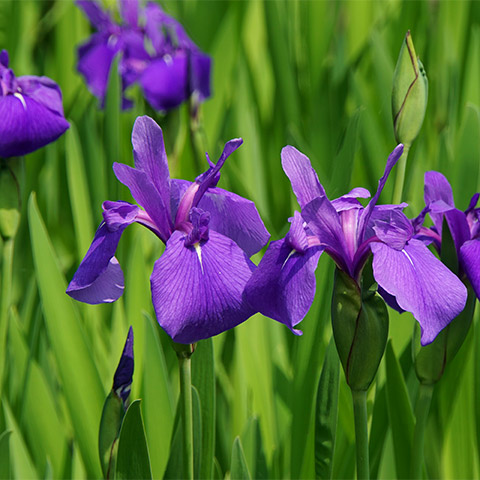 With just a few weeks left in the regular season, Cindy and I were really looking forward to getting back home. But there is still a very busy month ahead, followed by a return to Japan in June with the ONL. There is also my son’s graduation from USC. Guess I get to play the proud father role.