Musicians are wondering what they can do in the wake of the brutal invasion of Ukraine. And the answer is, not much. With my father’s side of the family being from that region of the world, this provocation hits close to home. My friends, Russian and Ukrainian alike, are distraught and united in their support of those being attacked.

I guess no one can really understand how a conflict such as this can occur in the 21st century. Images of 1939 are flashing before our eyes as a tyrant once again attempts to dominate the world scene. And woe to those who dare to oppose him. Will we stand idly by as this blatant breach of world norms continues? Is there anything other than wishful thinking that can take place?

As I write this, I am at the start of a seven-week concert tour in Europe in Valladolid, Spain. Among the pieces we are performing is the Barber Adagio for Strings. At the dress rehearsal, the morning after the first military incursions into Ukraine, I stood on the podium, remembering the time I led the BBC Symphony in this work just three days after the attacks of 9/11.

When we finished rehearsing, all I could do was look at the musicians and say, “Tonight, we must keep the good people of Ukraine in our thoughts as we play this work of somber reflection.” I wondered if I should say something at the performances, but Spain has its own problems with the separatist movement in the Basque region of the country. At best, musicians can function as diplomats, but not as politicians.

I thought about trying to organize a concert in the States that would put several Russian and Ukrainian musicians together onstage in solidarity. But what good would it do? Do such well-intentioned gestures accomplish anything of lasting value? And who knows what will happen in the end? We seem to be flirting with a conflagration not seen in the world for more than 75 years.

So the best I can do is to go onstage and attempt to transport the audience out of the tragic reality in which we are living, at least for a few minutes. That is what the music did for me. I focused on the ebullience of the Candide Overture, the sorrow of the Barber, the cautious optimism of Appalachian Spring, as well as the sunshine of Dvořák’s 8th Symphony, and at least for a little while, I was reminded of what is good in our world. 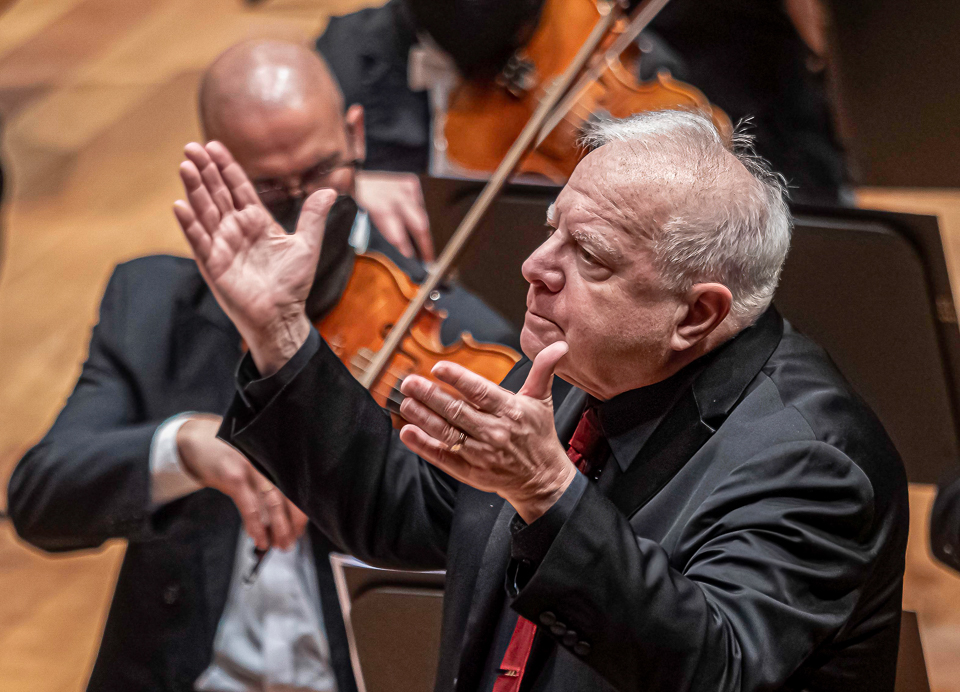 This town of slightly more than 300,000 people has managed to become a cultural beacon in the region of Castilla y León. About two hours northwest of Madrid, Valladolid is not really a tourist destination, although there are architectural reminders from a few hundred years ago to be discovered. Its people have the utmost respect for the arts. Music is something to be treasured, no matter what form it takes.

The Orquesta Sinfónica de Castilla y León is now thirty years old. As with many ensembles throughout the world, there are representatives of many countries among its ranks. Many of the string players come from abroad, but the winds, brass, and percussion sections are mostly homegrown. I was last here two years ago and remembered the ensemble being very good. Now they are even better.

Their performance space is around fifteen years old, and it is one of the marvels of acoustic genius. The seating capacity is roughly comparable to Orchestra Hall in Detroit, coming in at 1,700. What makes it wonderful is the equality of sound emanating from the stage.

At the Miguel Delibes (no relation to the composer) Cultural Center, the sound from the podium is the same as what someone seated in the audience experiences. It is often said that the best place to hear an orchestra is from the conductor’s position onstage. However, that is simply not true in most concert halls because we are close to some of the musicians and distant from others. I usually ask someone to go into the house to listen for balances, or I let the assistant conductor lead while I head into the audience to take note of the sound in different sections of the hall. So it was with delight that I could rehearse and make whatever changes needed without having to consult with anyone.

All in all, it was a true pleasure to make music with these wonderful people, and I was happy to have a great experience to begin this trip.

The other event I led in February was equally, if differently, stimulating. For the past several years I have been teaching at the Manhattan School of Music. Most of my time is spent with the orchestra, and occasionally I will give a master class to conductors and composers. The school is located where the old Julliard used to be when I was a student. There are still remnants of the good old days, and I can still smell the strong aroma of my teachers’ cigarettes in the dressing room.

For this trip I chose a very demanding program, as I believe these young musicians enjoy a real challenge. We started off with a relatively recent piece by Toshio Hosokawa called Blossoming II, a reworking of a string quartet he had written earlier. It is evocative, colorful, and somewhat sad in places. But it gave us an opportunity to explore a world that attempts to meld two cultures.

Hosokawa has become an important composer in Europe. He is based in Germany, and one can hear influences of Messiaen as well as Takemitsu in this piece. The composer apparently watched the livestream, as he sent a message to everyone thanking them for performing the work.

Next came another rarity, one I consider to be a masterpiece of a very special kind. Benjamin Lees was born in China and came to the States at a very young age. He was respected in the profession but not really thought of in the same league as say, Copland or Barber. And yet, his Concerto for String Quartet and Orchestra is fresh, vital, and original. Lees did not want to identify with any specific nationality in his music, but one can hear echoes of Stravinsky and Bartók in this work. The four soloists acquitted themselves with aplomb, and the orchestra managed the Sacre-like meter changes skillfully.

After the break, we tore into the Lutosławski Concerto for Orchestra. What a glorious piece! It still shocks me that it is not played as often as its counterpart by Bartók. It is a real test for an orchestra but also has immense appeal for the audience. This work, dating from 1954, is written in a traditional style, as opposed to what the composer would write a few years later. Along with Penderecki, Lutosławski helped forge a new path for composition, not only in his native Poland but also for the whole world. The young musicians played as one and were boldly confident. I had a great time.

One of the pleasures of being a freelance conductor, devoid of any administrative decisions, is that I get to rehearse and perform what I want to. There are no distractions, and my focus is purely on music-making. As we emerge from our Covid cocoon, it is taking a while for me to hit my stride. It still feels like a physical adjustment to stand for a couple hours and wave my arms. But with the two events of February, I became convinced that it would be possible to continue contributing to the world of music.

The Slatkin Conducts Slatkin album is out and is being met with very nice comments.

With three more Spanish cities and two weeks in Dublin, March should be a good month of music-making. But it will be difficult not to call to mind the events that have taken all of us to a place we never thought we would be in again.