It was Tchaikovsky month at the DSO. Considering that most of the time, temperatures outside were in the single digits, it seemed appropriate to bring warmth to those who attended the six programs and 12 performances that took place.

February is a difficult month for the arts in Detroit. Many of our regular donors, subscribers and patrons are in warmer climes down south or on the slopes out west. This means that we need to come up with something just a bit different in order to fill the house downtown. So two years ago, we did an experiment and put Beethoven on the docket. It did even better than we all thought possible.

This time around, it was the turn of the Russian master. During the course of the festival, the six numbered symphonies were presented as well as all the concerti, minus the Concert Fantasy. In addition, several works were presented for the first time in our area, and there were lectures and discussions to help provide perspective on the composer and his time.

Planning events such as these takes a lot of time and effort. With two different programs each week, we had a limited number of rehearsals in which to prepare the music. We also recorded the symphonies, which meant only two shots at each plus a bit of patching up after the second performance. It was critical that a rehearsal plan be put in place so that each musician knew in advance what we were facing.

Most of the programs contained at least one piece that was familiar and others less well known. For example, when we played the Fifth Symphony, a work we toured with last season, the earliest as well as the final piece Tchaikovsky wrote filled out the concert. Only one of the programs contained all chestnuts. The symphonies were not presented in chronological order, but that did not seem to matter. A balance between early, middle and late pieces was struck in most of the concerts.

Perhaps some of this festival was just for me. I became fascinated with the history of this composer. Considering that my grandparents knew Tchaikovsky, it was not surprising that I felt a close bond with the music. I heard two of the quartets played frequently in my home, where Russian was the language that was spoken when English did not suffice. This was a sound and style that I grew up with, so presenting all this music seemed second nature to me. But in looking at all the new faces in the DSO, I realized that not only were the unfamiliar works being played by many for the first time, some of the standard repertoire was also being performed by a few musicians who had never seen this music before.

We had the pleasure of very distinguished soloists for the whole festival. Detroit favorite Olga Kern was on hand for the three works for piano and orchestra. Although we were not able to present the original version of the 2nd Concerto, this piece proved to be a major discovery for many in the orchestra and audience. With the incredible solo trio of the slow movement, we could showcase our concertmaster, Yoonshin Song, as well as new principal cellist, Wei Yu.

As usual, Olga brought her formidable musicality and technique to each work. She was playing the Third Concerto for the first time, but you would never have known it from her command and understanding of this final work by Tchaikovsky. Olga also had a challenging travel schedule – between rehearsals and concerts, she was doing recitals with Renée Fleming. Considering that the weather was iffy at best, we were all fortunate that Mother Nature did not delay any flights.

Julian Rachlin dazzled in the Violin Concerto. At 40 years old, he still looks like a teenager, but his mastery of this work was totally one of maturity. We decided to have a bit of fun, and I did something that I can only do with a soloist who is flexible and has a sense of humor. I conducted the concerto from memory, removing the music stand. At the start of the season, I had vowed that I would do all the symphonies without the music in front of me, even though the first and third of the group have not appeared in my repertoire very often.

You might wonder why I do not usually do concertos in this way, but really the answer is simple. If something occurs and there is a memory slip by the soloist, I need to be able to get everyone back by knowing the measure number where we will pick it up again. With Julian there were no worries, as he had just come off a tour where he played the Tchaikovsky almost a dozen times.

The soloist in the Rococo Variations was the young Armenian cellist Narek Hakhnazaryan. This 26-year-old won the Tchaikovsky competition a few years ago, and his winning way charmed everyone. He also agreed to play the rarely heard Nocturne, and this made for a nice warm-up piece before the Variations.

The orchestra was in terrific form for each and every program. At first it seemed as if the task ahead was daunting, but after the first week, you could feel everyone digging in and collectively deciding to meet the challenge. Most of the musicians truly enjoyed their encounters with the first three symphonies, and even with the limited rehearsal time, everything sounded well prepared.

There were a couple of items that gave a different context to some of the pieces. We were able to demonstrate some of the early versions of Romeo and Juliet, enabling the audience to hear Tchaikovsky’s compositional process over an 11-year span. We also performed, probably for the first time in the United States, the portion of the 1812 Overture that was edited by the Soviets, as they did not permit the Czarist Anthem to be played. When you think of how popular this piece is, it is astonishing that more than three generations of Russians never heard the original intent of the composer.

What was learned from this festival? First and foremost was that there is indeed an audience that is intellectually curious and wants to hear a large body of work by a single composer or on a particular subject. Those who came to all six of the programs as well as various ancillary events were extremely satisfied by the experience. The orchestra proved that it could tackle all this music with the aplomb they bring to weeks that are less complex. I loved immersing myself in this world. It reminded me that study encompasses more than just having the music under my belt.

It also provided a framework for the next time I do any of these pieces with the orchestra. We developed a specific sound and style that remained consistent throughout the festival. It also gave me a much greater connection with both orchestra and audience, through both the concerts and the webcasts. 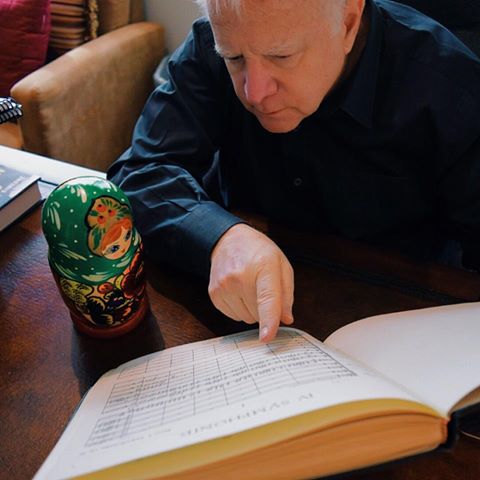 And then there was Maddie. Our Matryoshka nesting doll was the surprise hit of the festival. She popped up all over town, in videos as well as at each performance. Sometimes she was onstage, other times in the audience, and she even helped me memorize the Third Symphony. We will miss her, but I suspect we have not seen the last of Maddie.

Next season it is on to Brahms. We have a year to prepare, and I am certain that this will be our most comprehensive festival yet. Once again, great soloists will grace the stage, and the immersion into his complete orchestral output without chorus will be a project unlike any other.

Meanwhile, it is off to Europe for six weeks with visits to Lyon, Poland, Siberia and Helsinki. No time to leave the winter wonderland that hit Michigan and probably will follow us now. Since I really have had no time, there is no recording recommendation this month. Perhaps there will be two next time around.

In the meantime, I believe it is time to stop listening to Punxsutawney Phil and just accept whatever comes.

See you next month.