The Detroit Symphony Orchestra’s digital live album of Johannes Brahms’s four symphonies has topped the iTunes Classical Chart. As the second album on the orchestra’s in-house “Live From Orchestra Hall” label, the release is in celebration of the German composer’s 183rd birthday. The symphonies were conducted by Music Director Leonard Slatkin and were streamed live worldwide on the DSO’s free Live From Orchestra Hall webcast series.

Available globally, “Brahms: The Four Symphonies (Live)” launched on all major download and streaming services and includes a digital booklet featuring an exclusive essay by Brahms scholar Jan Swafford and liner notes by Charles Greenwell, co-host of the Live from Orchestra webcasts.

“The works left to us by the German master are made more remarkable when played over a compact period,” said Slatkin. “We are reminded that each is a masterwork, filled with individuality and variety. Unlike Beethoven, Brahms left almost no traces of music from previous symphonies. Each is totally unique, inhabiting worlds that simply did not exist until Brahms invented them.”

Produced and mastered for iTunes by Grammy winners Blanton Alspaugh and Mark Donahue, the album is the first of the complete Brahms symphonies released by a major American orchestra in more than a decade. 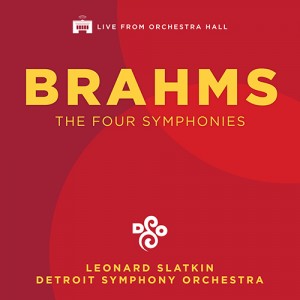