What a way to end my concert calendar for the 16-17 season! A three-week Asian tour with the DSO.

This trip was a long time coming. When I began my tenure in Detroit, one of my mantras was that we would not go on the road until we had funding in place. The strike that occurred six years ago meant that we would certainly not hit the tour circuit for a while. But everyone believed that we could meet our goals, and finally, the DSO embarked on an international trip, the first in a very long time.

Preparations were swift, with four rehearsals and a sendoff concert before we departed. As has been my mission with all tours, I featured American music, something most orchestras from the States do not do. With works by McTee, Gershwin, Barber, Bernstein, Copland and Anderson, the homeland was well represented. For the one-off in Detroit, we performed with one of the soloists going on the trip, Akiko Suwanai. She gave an elegant presentation of the Korngold Violin Concerto, a work that could be considered American.

The remaining repertoire for the tour included the Fourth Tchaikovsky Symphony, a short piece by Takemitsu, a piece for cello and orchestra based on music taken from a Chinese television series, as well as two Japanese encores. A lot of repertoire, but much of it was familiar to the orchestra and would be rehearsed upon arrival in each country.

Cindy and I left a couple days ahead of the orchestra. Jet lag is not so easy to overcome these days, and any extra time is welcome. The first stop was Tokyo, from which most of our Japanese concerts could be accessed fairly easily. We met up with the orchestra at Seitoku University, an all-girls school, where we also rehearsed with another soloist, Makoto Ozone. He is primarily known in the jazz world, and I have admired him for many years. With the Rhapsody in Blue, he basically improvised during the several cadenzas and provided some amazing chord changes. I loved working with him. 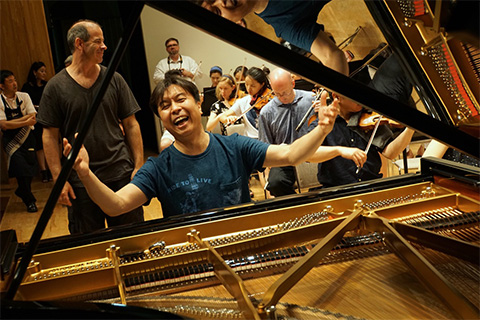 Pianist Makoto Ozone not excited at all

With four concerts in a row, and a bit of travel, it was a pretty tough start, but the orchestra stayed in great form, and most of the musicians did not seem to be overwhelmed with tiredness. There were terrific meals, one of them in a truly outstanding sushi bar. Five different sakes complemented the meal, and the proprietors were lots of fun. I don’t remember much about the next day. One great surprise for the audience occurred when we were in Osaka. Instead of “Flowers Will Bloom,” an encore that we had been playing on our earlier concerts, we performed the song associated with the Hanshin Tigers baseball team. Their squad seems to be doing just as poorly as the other Tigers in Detroit. But the crowd loved it, and I even wore a team cap. 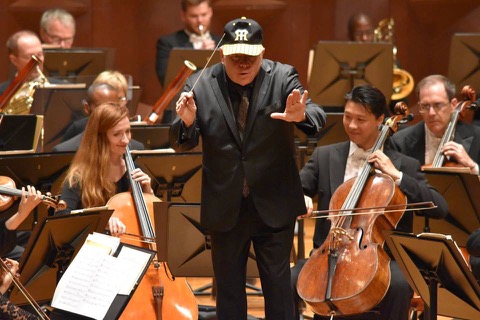 Rooting for the Hanshin Tigers

Akiko has her own music festival in Opera City—yes, there is such a place in Tokyo. It was there that we played our only performance of Takemitsu’s “Far Calls, Coming, Far!” This piece for violin and orchestra was played in the hall that bears the composer’s name, making it more than appropriate for the occasion. More moving was that it had been dedicated to Takemitsu’s daughter, Maki, who is a representative for the Kajimoto Concert Agency. She was in charge of taking care of the DSO on this trip. Maki told us that she never knew that the piece was dedicated to her until after her father died.

The final concert in Japan took place in Fukui—had to be careful about the pronunciation here—and Makoto and I decided to do something different. Instead of a solo encore, he and I did a riff on the Second Gershwin Prelude, sort of four-hands. I took the opening, he did the second chorus, and then we just jammed a bit on the C-Sharp Minor blues. No rehearsal and totally off the cuff. I think the orchestra was very amused and surprised with this, and after our final orchestral encore, Devil’s Dream arranged by my dad and orchestrated by Cindy, we wrapped up our stay and headed off to China.

Prior to leaving Detroit, there had been concerns that our South Korean musicians might not be allowed to enter. With a lot of legal and diplomatic maneuvering, everything got settled, and the entire orchestra entered the country. We had also agreed that if any of our musicians were denied entrance, we would turn around and head back home. Now, with everything in place, we could proceed.

There were five concerts, and the only city where I had conducted previously was Shanghai. But temperatures were consistently in the hundreds Fahrenheit, and most of our time was spent indoors. Cindy and I do not like oppressive heat and humidity. We were able to take in a few of the sights, and once again, the DSO played superbly at each concert.

The novelty on the program was the work for cello and orchestra based on The Dream of the Red Chamber. The unusual title refers to a novel from three hundred years ago that became the basis for a 38-part television series in 1987. The composer was Wang Liping, considered the John Williams of China. Everyone in attendance seemed to know this music, and that accounted for surprisingly good-sized houses. Wang came to the final performance. The soloist was Chinese cellist Trey Lee, who resides in Berlin. 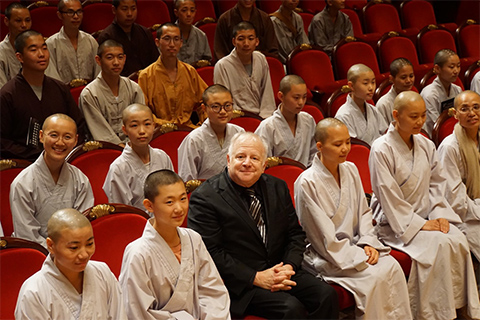 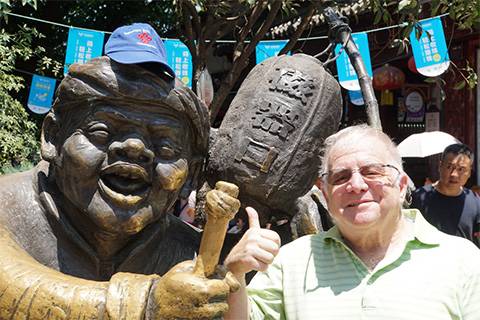 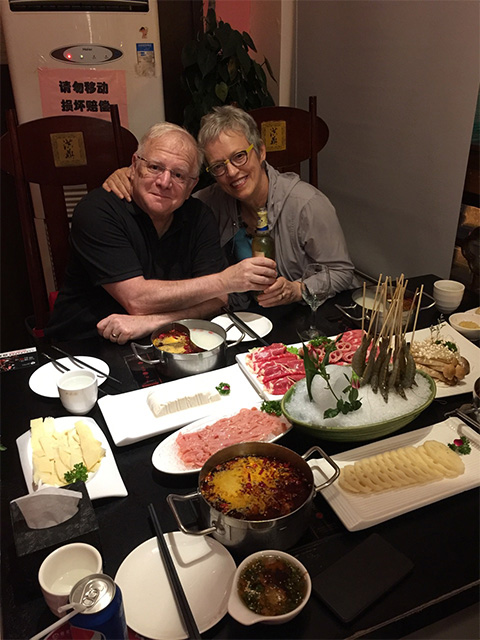 On the town in Chongqing

With seven of the DSO musicians being from China, this was a homecoming for them. Two hailed from Beijing, and the other five came from our final stop in Shanghai. I decided to let them have a bow in the city where they grew up. There were several receptions and dinners hosted by our sponsors, who have major corporate ties to China through the automobile industry.

But the final event was all DSO. We said our goodbyes for the summer, congratulated everyone on a tour well done and headed on to the next places to visit. For some, it was off to festivals. Others would stay in Asia for some downtime. Cindy and I went to California, where she was one of the composers-in-residence at the Cabrillo Festival. All I had to do was teach for a couple days and then it would be time for R&R.

It is now confirmed that my second book, Leading Tones, will be published by Amadeus Press on September 12. It is available for pre-order, and I hope that it will be as well-received as its predecessor. The book is a bit more controversial than the earlier work, but hopefully my observations about aspects of today’s musical culture will be understood by all. A third tome is in the works.

Have a great rest of the summer, don’t get too depressed about events in the world and stay healthy!